I am a budding mycophile (so to speak)! 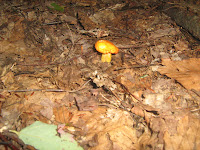 My oboe teacher's husband enjoys mushrooming. I must admit that before I learned this I had never before given the art of mushrooming a second thought. 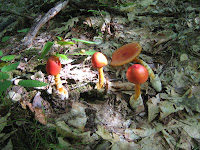 Then recently we hiked the Oak Ridge Trail at Castle in the Clouds in New Hampshire and came across some lovely, colorful mushrooms. Hmm. 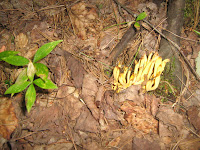 Then last weekend we hiked a trail at the Shaker Village, and there were fungi galore! Big ones, small ones, flat ones, curly ones, even coral-reef-looking ones.

Somebody please tell me what this one with the purple lamellae (gills) is!!! Could it be Laccaria ochropurpurea? [I arrived at that guess via the enjoyable flowchart at the bottom of this page at mushroomexpert.com.] 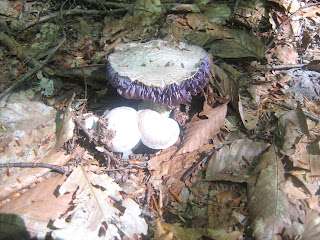 And what's this pure white one with the scalloped edge? I need a chart! 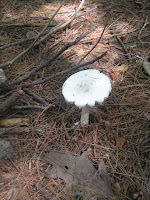 All in all I think I took pictures of 18 or 19 different species. I kept falling farther and farther behind the rest of my family. Bugs attacked me from all sides every time I crouched down to take a picture. At first my companions would call across the woods from the trail ahead to see if I was still following, but after a while they gave up. And at first I'd cry out with excitement to them every time I saw a new one, describing color or some distinctive characteristic, but I never got more than a tolerant, "uh-huh," and the distance between them and me got wider and wider, so though my enthusiasm never waned, I just kept it to my happy, mushroom-loving self after a while. My son later chided with good-natured grumpiness, "You could have hurried up a little bit, Mommy!" after I caught up with the rest of the hiking party. My husband just smiled knowingly to himself and said nothing. 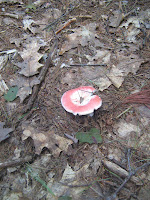 Later that night as my husband and I were pillow-talking I began babbling enthusiastically about my mushroom finds. "I need a book!" I exclaimed. "A picture atlas or a field guide or something."

"Did you see that last big one on the trail with the pinkish ring on the cap?"

"Actually there were a lot of old leaves and stuff all over it. I picked off the leaves so you wouldn't miss it."

That's my husband for you. He'll tell me he loves me with words every day, but he'll show me, without words, with quiet, often-unnoticed actions, much more often than that. It's probably the one time getting fungus was even better than getting flowers as a token of affection. 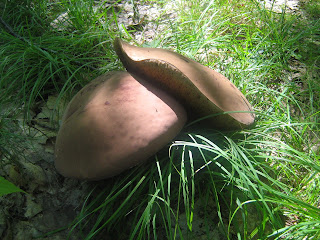 John D. Halamka, MD, is Chief Information Officer and Dean for Technology at Harvard Medical School and a practicing Emergency Physician. He authors the blog Life as a Health Care CIO at http://geekdoctor.blogspot.com/ and happens to know a lot about mushrooms! He very kindly sent me the following reply when I e-mailed him asking for help identifying my mushrooms (stuff in brackets and hyperlinks to mushroomexpert.com/wikipedia added by me):

"Happy to help. Here are the identifications in order of your pictures.

[The orange one]: Omphalotus olearius - the Jack o Lantern mushroom, sometimes confused with Chanterelles - it's filled with cholinergic toxins such that folks who eat it exhibit the signs of organophosphate poisoning.

[The red ones]: Amanita caesaria - an edible Amanita favored by Claudius. However, its appearance is similar to Amanita phalloides, the death cap, so I recommend avoiding all Amanita species.

[The yellow sea-anemone-like ones]: A mushroom without gills that's part of the family Ascomycetes. The genus is Clavaria and the common name is Fairy Club.

[My favorite, the purple-gilled one]: Could be a Laccaria, but more likely it's a toxic Cortinarius.

[White with the scalloped edge]: A toxic Amanita - likely pantherina.

[The one with the pink-tinged cap - my husband's love note]: Russula emetica. [Hmm...too bad about that emetica part...]

[Big snuggly ones]: A bolete of some type such as Boletus luridus.

Buy David Arora's Mushrooms Demystified - it's the only good field guide on the market.