Do NOT Miss This Show! 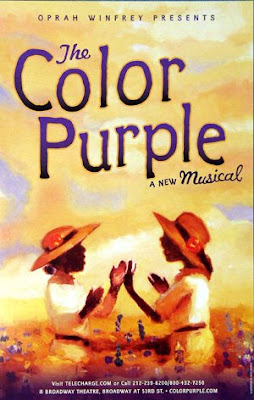 My daughter and I have just returned from musical adaptation of The Color Purple.  I've been to a LOT of musicals, but never to one at which I've both been moved to tears AND laughed so hard I could barely breathe!
We were blown away by the incredible singing and acting talent of the touring company, the athleticism of the dancers that brought Africa to life in the main character's mind and ours, the power of the story.  Book, movie, and musical are all so different from one another, yet all so rich and compelling in their own ways.
GO AND SEE IT!  It's a journey unlike any other. (Click on the third video down on this page to get a "feel" for what this show inspires.)
It's here in Boston at the Wang Center until Sunday, June 28.
Then it's going to
Washington, D.C. June 30-August 9
Houston, TX August 18-23
Charlotte, NC August 25-31
Chicago, IL September 2-13
Atlanta, GA September 15-27
Rochester, NY October 6-11
Schenectady, NY October 13-18
Birmingham, AL October 20-25
Miami, FL October 27 - November 1
Norfolk, VA November 10-15
Jacksonville, FL November 17-22
Naples, FL December 8-13
Newark, NJ December 16-27
Indianapolis, IN December 29-January 3
Posted by T. at 11:40 PM