As we were coming out of the métro this morning I was stunned to hear beautifully played strains of a Bach Air from somewhere in the tunnels.
"Is that what I think it is?" I asked out loud.
"Sounds like it," my husband replied.
"A recording?"
"I don't think so."
"You think that's live?  Are you sure?"
We went to check it out, winding our way deeper into the tunnels under the Place de la Concorde, following the sound of Bach's music, followed by some Rodrigo.  You'll understand in a moment why I almost couldn't believe my ears at first, and why I was then moved to tears a little bit when we found this (click "play"):
An oboist in the tunnels of Paris.  Where else in the world?!
(Of course we bought a couple of CDs from him, and he gave me a discount for being a "fellow-oboist."  How embarrassingly gracious is that?  I barely even count as an oboe STUDENT these days, while he is concert master in Ukraine, visiting Paris on business. Out of curiosity I asked him what type of oboe he was playing.  It was a Yamaha, but for "real" concerts he uses a Rigoutat.)
*** 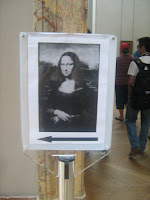 After an experience like that to start off our morning, the Louvre seemed almost anti-climactic!  That place is so overwhelming.  We went in with very simple goals:  the Denon wing, some famous statues, some sarcophagi, then out.  Except for the fact that we got totally lost in the Ancient Near East section trying to find the exit, we did really well.  Saw the Winged Victory; the Mona Lisa and some other Da Vincis that I actually prefer; the Venus de Milo; the old medieval walls they've been excavating; sarcophagi; and some artifacts from ancient Iran. 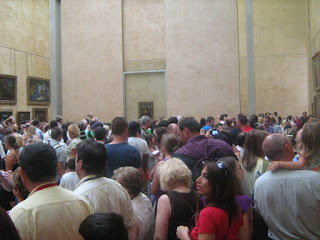 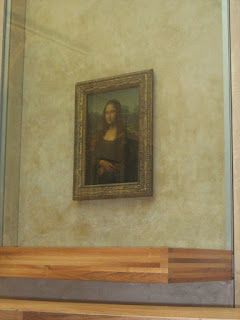 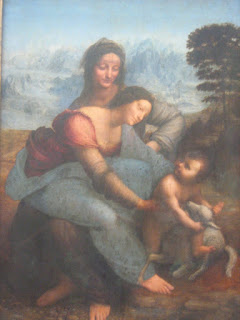 I was sad not to have the energy to look for Vermeer's Lacemaker, but by midday we were Louvred-out.
I must confess I am not sold on I.M. Pei's glass pyramid.  I have memories of the Louvre without it, and I still think it spoils my view of the building.  On top of that, the greenhouse effect in there can be brutal on a hot, sunny day.  Just saying. 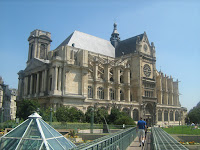 After the Louvre we stumbled upon the rue J J Rousseau entrance to one of Paris's covered passages, the Galerie Vero-Dodat, on our way to the church of St.-Eustache, where we took photos of our kids on Henri de Miller's outdoor sculpture l'Écoute.  The foodie in me wanted to visit the Comptoir de la Gastronomie down the street but the presence of a woman smoking in the doorway just about undid my desire to check out the store.  We had tapas for lunch in the neighborhood of Les Halles, at Les Piétons, then went home for a rest.  Dinner tonight will be simple - crêpes from a crêpe stand near the Champ de Mars, probably. 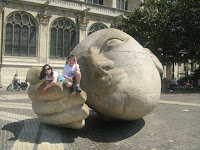 After the magic of this morning's oboist I think I've hit one of this trip's major highlights already.
Posted by T. at 1:30 PM

Sounds like the trip is wonderful. I liked your fellow oboist! A little taste of Paris in the boring old USA.

My wife and I just returned from Paris for our wedding anniversary. The highlight of our trip was a Vivaldi concert at Sainte Chapelle. Enjoy the city. It is our favorite.

God, I LOVE Paris...that is so amazing that you stumbled upon an oboist like that! By the way, I absolutely LOVE that picture of your kids in that sculpture...

That is amazing about the oboist! I have to go back and watch the video!

I should have waited to comment until after the video, but I had to come back. I love that song. Absolutely magical! You have your own Paris soundtrack going. And I am so impressed with the video.

I'm not huge on the pyramids, but they do look pretty cool reflected in the pools at sunset.
I love music playing in subways and on public transport as well...

Wow. A real live oboist is a pretty cool find in the tunnels below Paris. :) We lived in NYC for a bit and I remember musicians in the subway, but I don't think I ever spotted an oboe.

Great video! Thanks for sharing!