No More Totes/Isotoner for Me 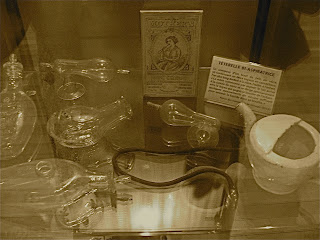 I am so, so, sooooooo angry.
I'm supposed to be working on peace and compassion and trying to let go of resentment.
But after I read THIS article yesterday I posted a very resentful, very non-peaceful update on my facebook page:  "T. is totally disgusted and thinks the Ohio Supreme Court shouldn't be allowed to take unauthorized pee breaks even if their painful bladders swell to the point of near-rupture."
So there.
I cannot possibly understand a) why any woman should be denied the opportunity to express breast milk if she needs to; b) how the need to express breast milk can be said to have nothing to do with a woman's "sex or condition;" and c) how firing someone because she needs to express breast milk can be considered anything other than patently discriminatory, especially when people with painfully full bladders have all the right in the world to get relief without permission.
Breast engorgement can be EXTREMELY painful.  Without relief, milk can spurt out at embarrassing moments and stain clothing, making the situation quite public.  Was the Isotoner company expecting this employee to go without relief ALL DAY?  I'm sure it would never impose such restrictions on their male employees who were doing a little peepee dance in the production line because their bladders were so full.
When I was nursing my son I had different reactions from different people.
When I went to the old-timer chief of surgery at my med school during my surgery rotation to ask for permission to drive home during my lunch break so I could nurse my son, to my great shock he said, "Of course!"
His young male chief residents, though - maybe because they hadn't had children of their own yet? - were less understanding.  I was begging to scrub out of surgery one time and one of them at first wouldn't allow it.  I was in so much pain that I was practically in tears.  Milk was starting to come out onto the front of my scrubs.  It was at that point, when it was a threat to the sterile field, that I was finally allowed to go.
The nurses in the OB/gyn department didn't want me pumping in the nurses' locker room.
The OB/gyn chief resident warned me not to use the back room of the residents' lounge.
The surgery residents were ok with my closing the door to the call room in the surgery residents' lounge but one of them jokingly called from outside, "Do it out here!  Do it out here!" When I opened the door one of my filled bottles was still on the night table waiting to get put away, and this resident or his buddy next to him said, "Oh my gosh, it looks just like real milk!'
I had to laugh.  "It IS real milk, man!" I said.
I tried my best to keep up the nursing during those rotations, but after three months, my milk dried up, and on that day, I held my son and cried and cried.
Nursing is a deeply personal decision, and I think women who choose it should be supported in their efforts, not criticized or undermined, and certainly not persecuted or punished.
Posted by T. at 8:33 AM

I'm with you all the way on this one. Very well said.

I'm angry too for this kind of decision and also for all of the American mothers who can't breastfeed in public, because it is so shocking to show a tiny piece of breast flesh!!
I still haven't understood why showing half naked and provocative so-called singers (Britney Spears and the like) on TV is prefectly acceptable whereas a simple and human act like breastfeeding and everything that goes around it (like milk extraction) should be seen as an horror show...
There are no such behaviors in France and England and mothers are left at peace when it's time to feed their babies.

Ridiculous. Boycotting as well. And this company's products must be used largely by women! Again, anger and outrage is sometimes justified!

HugeMD - great point about the Isotoner company's market. Makes it all doubly disappointing! I think they also make Totes umbrellas and ECNY flip-flops.

Isabelle - there are so many ways in which the EC is more civilized than the U.S. (phasing out battery cages in industrial farming, educating their populace for free, access to health care for all, AND realizing that nursing is the most natural thing in the world and women should be free to nurse their children no matter where they are)!

What a great point you make about the vast difference between gratuitous displays for the lascivious versus discreet maternal activity during which you could only see something if you were intentionally LOOKING and had your nose literally pressed to he woman's chest where the baby is. Some things here are just ridiculous and frustratingly stupid.

This dad shares your outrage.

This is beyond shameful.

Outrageous! Isabelle makes a good point about half-naked entertainers being more acceptable than nursing mothers. I am so sorry to hear that you, T., and others have faced discrimination regarding breast-feeding. I am grateful for the supportive enviornment I had during medical school and residency when I was breastfeeding (in the US). No more Totes/Isotoner for me either!

"His young male chief residents, though - maybe because they hadn't had children of their own yet? - were less understanding. I was begging to scrub out of surgery one time and one of them at first wouldn't allow it. I was in so much pain that I was practically in tears. Milk was starting to come out onto the front of my scrubs. It was at that point, when it was a threat to the sterile field, that I was finally allowed to go."

If I'd been your circulator I would've had you out of there in two seconds flat.

Wonderful points, T.! It is so unfair that women get discriminated against because of a normal biologic function! These types of decisions propagate the idea that women are somehow inferior to men and not as capable as men. If it was just accepted as a normal thing, we would be able to be more productive and happier in the workplace!

As a working/pumping mom, I just wanted to say that your post hit very close to home. Thanks. You brought tears to my eyes at the end. I am amazed that you were able to keep nursing for a few months in med school--your son is so lucky.