The Problem With Asking, "What Are You?" 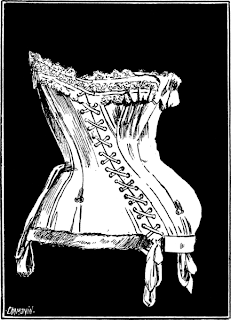 ["Corset de grossesse vu de côté." Image source.]
Categorization is one of the fundamental skills of our human intellect.  When we learn to categorize, we are able to organize, understand, and interpret our perceptions of the world around us.  Categorization helps us establish standards and form sound judgments, without which we wouldn't be able function well in community.
The problem is that in establishing standards and making note of common patterns, we run the risk of forming very, very bad judgments when people or objects fall outside the perceived norm.
This is particularly true, to my mind, with issues of race and gender.  In the case of race, the arguably neutral intellectual skill of categorization has become a savage tool for oppression and a justification, albeit fallacious, for the hatred of difference.  In the case of gender, categorization has led to injustice and personal suffering for those whose gender neither science nor philosophy can easily define.
I am thinking now of Caster Semenya.  I am disheartened by my impression that we as a human community are still willing to look askance, and coldly, at "outliers" and treat those who cannot easily be categorized as specimens in a global freak show.  Why does it seem so easy for the rest of the (white) world to treat her like a circus act, subject her to the probings of medical experts, and put her private matters on display?  I hope those experts are at least advising her on the potential clinical dangers she may be facing and concerning themselves with her health and safety.
Semenya's case is problematic on so many levels.  It forces us to ask,
I live in a multiracial family and work in a sexist subculture.  Issues of race and gender are of a deeply personal interest.  I am also intensely interested in cultural, religious, and sociopolitical definitions of human identity.  Which race box should my white daughter who is genetically part-Filipino and who feels Asian check off on her medical forms?  Medicine has taught me that while labels can be useful, boxing people into categories can be completely useless and perhaps even tragic.
My church takes the medically uninformed position, "Everyone, man and woman, should acknowledge and accept his sexual identity."  As a physician I see that norm as wrong on so many levels.  What would the Church tell the boy I anesthetized so his uterus could be removed, or a girl undergoing surgery to remove her internal / undescended testes?  What would it advise people who are externally female but genetically male, as in the case of pure gonadal dysgenesis or male pseudohermaphroditism / androgen insensitivity syndrome?  Or genetically female, but externally masculinized, as in congenital adrenal hyperplasia? 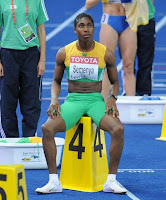 If you can't necessarily define gender with physical structures or chromosomal identity, you're left with the strong, deep, neuropsyschological needs and inclinations of the individual.  But granting those validity would mean the unraveling of so many other questionable assumptions.  Semenya's situation and our response to it teach us so much about ourselves and our assumptions.  By questioning her validity as a woman, we indirectly challenge her humanity and perhaps diminish our own.
I don't envy the IAAF.  At the end of the day I don't think there's a scientifically reliable "bright-line" test for gender validity.  This opens up a whole can of worms for athletics regulations and workplace gender issues for which I don't think a clear solution exists.
For more medical information on intersexuality, please visit this Children's Hospital website.
Posted by T. at 9:38 AM

I heard about this and thought similarly. We are so keen to say that only a man and woman should marry - but what of those who's genotype doesn't match their phenotype? I listen to this same line of thought from my family, who are extremely religious and believe that homosexuality is against God's plan, etc. I try to understand that line of thought while trying to explain how wrong that line of thinking is. We are not just one thing or another. As we're finding out, being human, is far more than merely XX and XY.

What made this case do tragic to me as I read it is that initially she thought she was just undergoing testing for banned substances. It never even occurred to her that her gender was being questioned.

"By questioning her validity as a woman, we indirectly challenge her humanity and perhaps diminish our own." I LOVE this. I have been pondering this very subject for a long time. I'm sure it's so hard for this young lady...being in the spotlight.

I know how hard Caster Semenya's case to be accepted as what she really is..take it from me I am an Androgen person too. a woman without the streamlined traits...it's our world and we can't please everybody ( in my case it's very hard especially in my country (Philippines) ...I experienced being ridiculed and subjected into curious inquiries...but still i live a life as I wanted to be...it's just a matter of "Positive Attitude" peace to you all :)

Here's an article from the November '09 New Yorker about this: