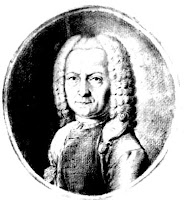 In 1720 composer Benedetto Marcello (whose oboe concerto in C minor is a well-loved part of the accomplished oboist's repertoire) anonymously published a satirical pamphlet entitled Il teatro alla moda - Fashionable Theater. In it he criticizes contemporary trends in opera by constructing a handbook of sorts for various participants in opera production.
The pamphlet suggests that the modern composer should have no knowledge of proper music theory; that virtuosi should be illiterate and don't need to have good pronunciation or comprehension of the words they sing - the better to perform "ornaments, trills, appoggiature, very long cadences,"* etc.; that the modern Poet "should not have read and should never read the ancient Authors, Latin or Greek. And this is because the ancient Greeks or Latins 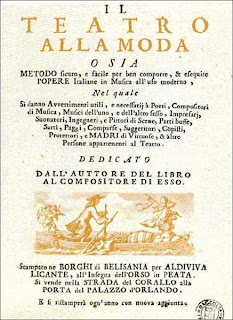 have never read the moderns;" and the mothers of female singers should mouth the words with their daughters at every audition, prompt them with the appropriate ornaments and trills, and lop at least a decade off their virtuose's ages whenever asked.
I read some of Il teatro in the original Italian, and I have to say, it's pretty funny. But I'm sad that Marcello included a caricature of Vivaldi on the cover of the pamphlet, and that the pamphlet is in fact a response to, and harsh critique of, Vivaldi's style. Benedetto Marcello wrote such a lovely oboe concerto (as did his older brother, Alessandro Marcello); I hate to think such a talented composer might also have been a sneering jerk.
Yet I can't pass judgment, because of what I'm about to do.
I'm about to start...in quizzical memory of Benedetto Marcello...and with tongue firmly planted in cheek...
L'Insegnamento medico alla moda: Fashionable Medical Education, being a compendium of safe, easy, useful and necessary Advice given to attending physicians, residents, medical students of both sexes, premeds, spouses of the above, & other People belonging to the World of Medicine.
Some excerpts:
Medical Students, say a fond goodbye to your spouses, your children, your hobbies, your wallets (figuratively speaking), and your beds (quite literally). You will probably never see them again.
Residents, especially those engaged in surgery or anesthesiology, should have themselves permanently catheterized so as to be able to void bladder contents at appropriate times rather than waiting the requisite 6 or 8 or 10 or 12 hours for their cases to be done.
Female residents, please prepare and practice the sweet smile you're going to show daily to patients who address you as "Miss," "Nurse," or "Kid" despite the name tag on you that clearly says DOCTOR on it.
Attending physicians, be sure to expect your students to know everything there is to know about medicine prior to their having been taught any of it; expect them also to read your mind and know exactly what you want without your giving a lucid explanation or clear directions; never offer clear directions, or guidance of any kind, or if you do, do so grudgingly and with an air of exasperation or contempt; don't forget to contradict the attending physician who was teaching before you, so as to confuse your trainees utterly and make them appear incompetent to the next person; and finally, never, ever, ever, ever allow the on-call residents to sleep. Ever. And make sure they have to work like oxen the following day, especially if they are residents in cardiac surgery or neurosurgery.
Spouses should take a vow of long-suffering patience and self-sufficiency in addition to all that love, honor, and cherishing they promised before they realized what they were getting into.
Nurses in the recovery room or ICU, be sure to brow-beat the residents from the moment they drop off the patients to the moment they finally take their leave and run to the rest room or drinking fountain. Some exceptions apply...
Fellows and senior residents: lord it over any one less senior than you, fix the schedule so it favors you and nails everyone else, bad-mouth the attendings above you and the juniors below, and avoid doing work of any kind.
Heehee...I know, I am SOOOOOOOOO bad...but I'm not really this cynical, honestly. For the record, during my training I did know attendings who were good teachers and clinicians, nurses who were kind and helpful , surgeons in various subspecialties who were gracious and respectful, and senior residents and fellows who exemplified everything I hoped to become as a physician. But after all these years, a girl can take things a little less seriously, lighten up, and let off a little satirical steam, no? :-)
_________________________________________________
*translations are from the wikipedia article about il teatro alla moda.
Posted by T. at 10:37 PM