You Are What You...Have?

What makes us human?

A capacity for language? Reason? Creativity? An ability to experience love, appreciate beauty, discern, relate? Our genes? A soul?

Last month Catholic bishops in the UK stated, in response to the creation of chimeras, " 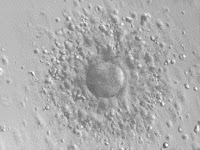 at the very least, embryos with a preponderance of human genes should be assumed to be embryonic human beings and should be treated accordingly."

Do I get to be considered human if only 51% of my genes are human? And if not, does that mean I get to kiss my rights goodbye?

One of the most memorable surgical cases for which I helped provide anesthesia as a resident was a case involving robotic surgery. I anesthetized, placed an epidural in, and watched over a little boy whose uterus was being removed. Yes, boy, and yes, uterus.

There are many conditions in which people who are genetically male appear female and vice versa. There have been stories and papers about attempts to raise these individuals according to their outward appearance, with painful consequences for those who felt strongly that they were the gender opposite of that in which they were being raised.

Is our identity how we feel about ourselves? Is it based on our genes? Clearly how we LOOK is an unreliable indicator. Reminds me of my recent wonderings about racial identity...and artistic validity, for that matter...

And if we are not just our genes, or just our feelings, or our physical manifestations, or predictably shaped by environmental influences, then again, how do we decide who we are, and who decides?
Posted by T. at 5:43 PM