The Problem of Prayer

"Those who believe they believe in God but without passion in the heart, without anguish of mind, without uncertainty, without doubt, and even at times without despair, believe only in the idea of God, and not in God himself." -Madeleine L'Engle


I was just enjoying Anali's blog and her post mentioning Dionne Warwick's song, "I Say a Little Prayer for You." Lately prayer's been coming up a lot; a personal ramble seems in order.

A few days ago I came across Dr. Sid Schwab's brilliant post about a family who had chosen prayer as the sole intervention for their child with neuroblastoma, after one arduous course of conventional medicine after another had failed.

I can understand why people would feel totally exhausted in the effort to fight a ruthless cancer. I took care of a 5-year-old with rhabdomyosarcoma my first year out of medical school, and that experience completely destroyed my faith--at least for a time. She was only five but looked like a hundred and five - emaciated, her skull and skeletal form detectable beneath her greyish skin, barely any wisps of hair on her head, miserable beyond description, unrecognizable when compared to the photograph of her at her hospital bedside, showing a healthy, smiling, fair-haired little girl, all sweetness and promise.

Her x-ray was unrecognizable too. We doctors get used to seeing certain things on an x-ray - large black spaces outlining the lungs, heart in the middle of the chest cocked just so, ghostly traces of familiar internal structures all in their proper places and configurations. Looking at her x-ray was like looking at a jumbled mess of alien, unfamiliar objects, which of course it was. Piles and piles of tumor had ravaged her on the inside, taking over every nook and cranny and claiming them as their own. There was barely anything identifiable to be seen.

The girl died after weeks, perhaps months, of indescribable suffering. If I'm ever asked to be on a jury for a "pain and suffering" case, I'm going to have to explain, "Well, guys, just so you know what my idea of 'pain and suffering' is, ever hear about rhabdomyosarcoma?" Five years old, lung spaces so obliterated by cancer that she could barely breathe. Five years old, body wracked with pain from head to foot, then untimely death. Hopeless.

My own daughter was five years old at the time - exuberant, full of laughter and life, pleasingly plump, sunny and bright. Naturally, I had a lot of questions. At the time my conclusion was that no one was listening; we were fundamentally alone, and after our lives ended, we turned into dust, our consciousness, "spiritual" growth, memories, and identity completely snuffed out into oblivion. But if you were to ask me today if I pray, the answer is, actually I do.

Dr. Schwab was able to articulate questions about intercessory prayer that so many people, believers and non-believers alike, ask, especially in the face of extreme hardship or tragedy. I've put a link to the full post on my sidebar, but here are the passages that I found so eloquent and so powerful:


I must also say this: there's something perverse to the point of revulsion in the idea of a god that will heal the girl if enough people pray for her. What sort of god is that? To believe that, you must believe he deliberately made her ill, is putting her through enormous pain and suffering, with the express plan to make it all better only if enough people tell him how great he is; and to keep it up unto her death if they don't. If that sort of god is out there, we're in big, big, BIG trouble. If people survive an illness because of prayer, does that mean that god has rejected those that didn't pray? If you pray for cure and don't get it, and if you believe that praying can lead to cure, then mustn't you accept that God heard your prayers and said no? If so, are you going to hell? But if you say either outcome is God's will, then what's the value of the prayer in the first place? In this case, it seems, it's only to make the girl feel guilty and unworthy. How sad. Since the whole idea is so internally inconsistent, give the poor kid a break.

Does this family's god need reminders; does he have DADD? Or is he waiting for them to hit a magic number of people praying? A certain quantum of prayer-units that must be achieved? Does he give credit for getting close, maybe knock off a little pain when they hit 80%, or is it all or nothing? In praying to him -- and if, as the article says, people around the child see God at work in all his glory -- shouldn't they be thanking him for their daughter's misery rather than asking for a change of plans? Shouldn't they be delighted with the whole thing? If He's perfect, how can you add to that by praying? Or expect a change? I simply don't get it.

And what of children who have no one to pray for them? If prayer works, what's going on with those kids? Does this prayer-tabulating yet perfect god not care about them? Or isn't he paying attention? Has he deliberately set them up...?


The most recent research study I know of, the STEP trial, showed that prayer makes no difference to the outcome of coronary bypass surgery. In fact, people who were prayed for and knew it experienced a significantly higher incidence of complications than those who either were not prayed for or were not sure they were being prayed for. The study had no control group (people who were not prayed for and knew they were not being prayed for). The "prayer" consisted of Christian prayer groups, who were told the date of surgery and the patient's first name and last initial, asking God for "a successful surgery with a quick, healthy recovery and no complications," twice a day for two weeks, starting on the eve of surgery.

Already I have a problem with this - not with the results, but with the underlying presumptions. One time my son wanted to ask God to prevent rain as the storm clouds were already gathering overhead. I told him this was not the right way to pray - asking for something so self-serving, and also asking for something not to happen when it was already beginning to happen. Even Jesus prefaced a desperate petition with "If it is possible..." Asking for over 1200 patients to recover quickly without complications from cardiac surgery is asking the impossible, especially when many of them were having the surgery BECAUSE they already had conditions which were the first step in developing those complications - previous heart attacks, high blood pressure, diabetes, lung disease, and the like. I think there's something inherently disrespectful and counter-productive in turning prayer, which is not merely an act but a way of relating, into what amounts to a GAME. Let's see if God will play - will he help out 50% of the time? 55%?

Like Dr. Schwab, I reject the notion of a Vending-Machine God. My husband said it well when we were talking about this: a prayer life is so much more about a relationship than about asking for things. Prayer is an intimate expression of longing, faith, hope, and love. If we do have spirit beyond our conglomeration of cells and molecular reactions, prayer, being a spiritual form of engagement, has real gifts for us. C.S. Lewis pointed out that prayer is not for transforming God but for transforming ourselves. I think we can pour out our longings and our pain in prayer, and we can even ask for help, but I also think if God is the parent that so many believe God is, this parent has to let us live our own lives freely, without interfering every time we have trouble. I believe help is possible, but using prayer solely or primarily as a means of acquiring fixes is missing the point and misusing the act.

I used to get mad at God for the suffering of children - sick children, abuse victims, the impoverished. Then someone pointed out to me, "What do you want God to do, make everything perfect? You're looking for the Christ who healed lepers and gave sight to the blind. He's not here." How startling it was to me to hear such simple, familiar, yet eye-opening words as if I'd never heard them before. Even the scriptures ask, "Why do you seek the living one among the dead? He is not here." I think Jesus lived out the example of what a loving God would want: when you see suffering, try to heal it. It's not what we're meant for, not "God's will."

We're the eyes and hands now. We have our work cut out for us. 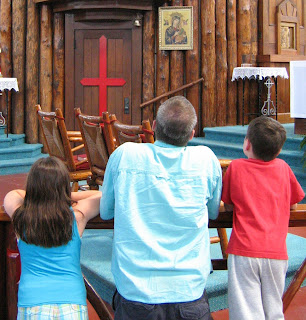 Wow, that was quite a post! As you know, I do pray. Not even just once a day. I'll say prayers for people and myself throughout the day. I feel that it helps usually. Sometimes I get frustrated with all the ills and evil in the world and I get mad at God and wonder why I even bother.

But I think when it gets down to it, I pray because I need to. I'm not Christian, or anything really, but somehow I think there is something bigger than all of us and it makes me feel better. I guess I adjust to the inconsistency.

“Here on earth, God’s work must truly be our own.”

Mitch, great quote, and so true.