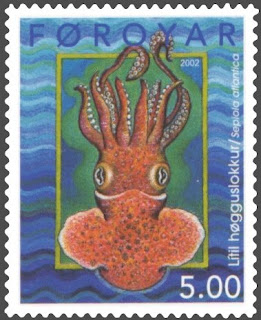 The Kraken
Below the thunders of the upper deep;
Far far beneath in the abysmal sea,
His ancient, dreamless, uninvaded sleep
The Kraken sleepeth: faintest sunlights flee
About his shadowy sides; above him swell
Huge sponges of millennial growth and height;
And far away into the sickly light,
From many a wondrous grot and secret cell
Unnumber'd and enormous polypi
Winnow with giant arms the slumbering green.
There hath he lain for ages, and will lie
Battening upon huge seaworms in his sleep,
Until the latter fire shall heat the deep;
Then once by man and angels to be seen,
In roaring he shall rise and on the surface die.
-Alfred, Lord Tennyson, age 21
***
I am reminded of squid everywhere I go here. 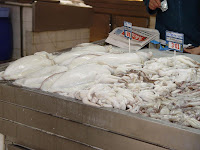 There are squid for sale, 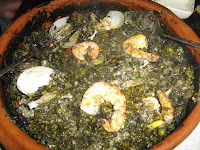 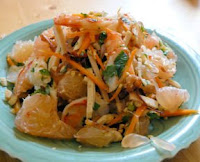 Asian salads in which the grilled white meat of the squid showcases the delicate flavors of tropical fruits like the pomelo, local seasonings made of sweetened citrus juice and fish sauce, ground nuts, and delicately shaved scallions, cabbages, cilantro, and lettuce (photo credit and recipe). 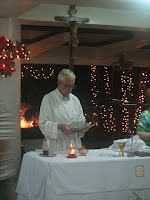 Then there's the priest at mass, who's a dead ringer for Squidward...(uh-oh, perhaps I should go to confession for thinking so...)

I've decided to pay tribute to this totally under-appreciated mollusk, such a star player in evolutionary, molecular, marine, and neurobiology. I'm a little late for International Cephalopod Appreciation Day, but I'm going to borrow a couple of suggestions from this festive website on how to make merry for mollusks: I'm not quite bold enough for the squid hat or the octopus tattoo, but I think the kids and I might have fun flying our very own paper squid...
***

I first learned about the squid's importance to neurobiology during college, where I was exposed to Hodgkin and Huxley's Nobel-prize-winning research on the squid giant axon - "NOT the giant squid axon," I can still hear the professor emphasizing, "but the squid giant axon. Don't make that mistake."
Since then we've learned even more about the workings of our own brains thanks to studies on squid and octopus brains, arguably among the "smartest" invertebrate brains out there. (Photo credit.) 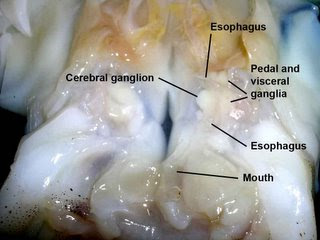 Squids learn. Newborn squids learn through trial and error. Their earliest life experiences can produce lasting physical changes in their nervous systems. The lessons they learn from a young age lead to complex, adaptive behaviors that enable them to succeed as adults, with corresponding, dynamic, neural transformations that are mapped into the squid brain down to its very cells. In an article entitled "Lowly squid's behavior may yield clues to human brain" Professor William F. Gilly at Stanford's Hopkins Marine Station says,

"The simplicity of the squid's giant axon system will be advantageous in identifying the genes and chemicals involved in causing and maintaining these cellular changes - even in people. In this way, the delectable calamari may actually help unlock the secret of how our own brain cells are modified by early childhood experiences and help explain why we are who we are."

Who we are, in fact, is a species whose experience can write itself into the brain as significant

chemical, cellular, genetic, and physiologic change. This implies an astounding pliancy and dynamism in the structure and function of the human brain. Cognitive neuroscientist Maryanne Wolf writes in her extraordinary book Proust and the Squid: the Story and Science of the Reading Brain,

"Computer scientists use the term 'open architecture' to describe a system that is versatile enough to change—or rearrange—to accommodate the varying demands on it. Within the constraints of our genetic legacy, our brain presents a beautiful example of open architecture. Thanks to this design, we come into the world programmed with the capacity to change what is given to us by nature, so that we can go beyond it. We are, it would seem from the start, genetically poised for breakthroughs."
This is a book that deserves a blog post of its own. Wolf traces the evolution of reading as a neurobiological entity, a human developmental attainment, and an agent of further neurodevelopmental change. The brain that could express ideas had to be able, at some point, to read; but literacy introduced its own rearrangements - a brain less dependent on memory, but more able to transmit information and ideas across vast expanses of time and distance. Wolf appears interested in and concerned about where our journey as readers and writers will take us next in this digital age, where spoken and written language may themselves be transformed, and where language inequalities - even "word poverty" - reflect the disparities between those who can "do well" in the world we have created and those who must struggle.

Every society has a Kraken or two to fear: a danger lurking beneath the surface we cross day to day, a hidden monster, or perhaps only an imagined one whose greatest menace is what we make of it in our own minds. One of the hidden threats I'd hate to see realized would be the decline of writing and reading - what Proust calls "that fruitful miracle of a communication in the midst of solitude" - and the deterioration of language skills that make our brains truly, splendidly human. So I'll repeat these magnificent lines by Tennyson, which I can't help reading (anachronistically) through the lens of medicine and evolutionary biology, and which make me want to savor language, savor words I can see and speak and rewrite and read and understand and know:

"above him swell / Huge sponges of millennial growth and height / And far away into the sickly light, / From many a wondrous grot and secret cell / Unnumber'd and enormous polypi / Winnow with giant arms the slumbering green."
Posted by T. at 6:00 AM

Squids are so cool!

You should read the science fiction novel Time by Stephen Baxter, in which a genetically modified squid is sent on a space mission to the Earth's second moon Cruithne.

Parts of the book describes the squid's thoughts and actions in a very fascinating and realistic way.

Thanks for the recommendation! I'll have to see if I can find it for the plane on the way back...

I'd never even think about eating them, mostly because of the texture, but your reference to Squidward made me laugh because I am (even in my thirties) a Spongebob fan.