Chicken Soup for the Filipino Soul 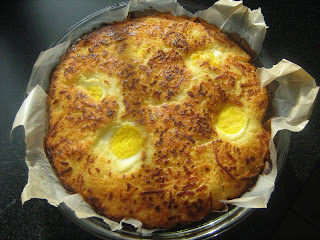 One of my dearest friends recently tagged me on Facebook with that list activity that's going around - "25 Random Things About Me." Don't worry - it'll take me a while to come up with 25, so I won't be treating readers of this blog to such a list at the moment (much as I love lists). But something on her list caught my eye.

She wrote, "I wish I felt connected to a culture."

My initial reaction was, "But wait, you are! I mean, isn't everybody?"
I thought about it some more in light of my recent travels, and I realized she was voicing a longing my own daughter is beginning to feel strongly, having witnessed my comfort within my own country which, despite its being highly Westernized, still feels "foreign" to Americans but still very familiar to me.
I realized that despite some past efforts (for a number of reasons) to distance myself from certain elements of Philippine culture, I am definitely, irrevocably, and happily connected to my native culture. As one of my Filipino colleagues put it, "You still recognize the aromas when you get off the plane." That's actually literally true. The closest thing I've found here to that "Philippine" smell is the scent of a certain brand of jasmine green tea. Proust comes haunting again...
So what does it mean to me, being "connected to a culture?"
It means I speak and understand a language known only to some. And that when I'm in a crowded room of people who don't speak that language, and that language suddenly springs up in conversation somewhere in the room, my ears perk up, and I feel a sudden delight at my immediate comprehension of what's being said.
It means there are some ideas that only phrases in my own language can convey adequately - phrases I understand, and which I know would lose something in translation.
It means there are certain looks and tones and gestures that I recognize right away that convey instant meaning but which would look like undeciphered code to anyone who didn't grow up with them.
It means there are certain customs / greetings/ games / rhymes / rituals that are familiar to me, in family settings or in broader social gatherings, but unfamiliar to others.
In means I eat and enjoy certain things that can't be found elsewhere. That I miss those foods when I'm away from them, and crave them, and try to make them, to recapture the smells and tastes of a place in which I have felt a sense of belonging.
It means knowledge of music that I can hum to myself without thinking about it too much, and that someone else from my culture would recognize immediately and be able to hum with me. Perhaps it even means knowing some of the dance moves to those familiar songs.
It means having some inside jokes. Jokes that only other people connected to my culture would "get."
Words. Music. Food. Three things that define my culture to me and give me a sense of ethnic identity. I suppose it's no coincidence they're among the things I love best in the world.
*** 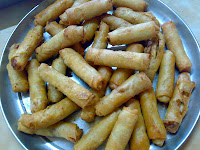 In my jet lag this past week I found myself lying awake constructing a little abecedario of Filipino foods: A for adobong pusit (which I made for dinner last night), B for bagoong (two jars, right in my pantry), C for calamansi (the best citrus fruit in the world)...and on and on to L for lumpia and longganisa, M for mangoes and maja blanca...P for pancit palabok...S for sans rival...
It seems almost unthinkable that I should have spent all this time in the Philippines without a single food post (though perhaps I went a little overboard with the Filipino food posts last year - see here, here, here, and here). I crammed my suitcase full of grocery items to bring home - envelopes of dry soup, tableas of drinking chocolate, breakfast cake (bibingka) mix (which I broke out yesterday, minus the requisite banana leaves in which to bake it - see above).

People have been doing this for over a hundred years. In my research for an online family tree I'm putting together, I encountered some notes and recipes in Spanish by a Filipino woman living in Paris in the 1880's who used to host gatherings for fellow Filipinos at which she served a variety of native dishes. I can imagine the crates of sotanghon she must have asked to be loaded onto ships bound for Europe. There's no doubt food has always been one way for people to stay connected to their cultures.
And every culture seems to have its chicken soup, or at least some sort of comfort food. One of the items I brought back was some instant arroz caldo. Not as good as home-made, but not bad, either, much to my surprise. 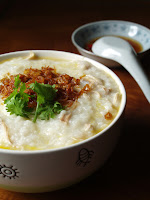 Arroz caldo: just saying it makes my mouth water.
It's an Asian rice porridge with a Spanish name - Filipino comfort food at its best. According to this site, "Arroz Caldo is actually a Chinese congee that was adapted to the tastes of the Spanish colonial settlers who patronized Chinese restaurants in the Philippines. As the Spanish could not pronounce Chinese, they gave it a Spanish name for easy reference."
Arroz caldo. Just what the doctor ordered when you're home with a cold on a rainy day, or craving some warm home cookin' on a winter night.
Nowhere have I found a better arroz caldo than that served, believe it or not, by Philippine Airlines.* Here's a version that may not be as good as PAL's, and that lacks the traditional golden coloring given by saffron or kasubha, but that should stick to the ribs well enough:

Mince 1 small onion, 4-6 garlic cloves, and a 2-inch piece of ginger.
Saute in oil till onion is translucent and garlic is brown.
Add chicken meat in pieces (however much you want) and 2 Tbs fish sauce (or to taste) and simmer till cooked through.
Add 2 cups of Asian rice - NOT American long grain, and NOT arborio - and stir till translucent.
Add 8 cups of broth 1/2 a cup at a time and stir constantly.
When sufficiently porridge-like, just before serving, add a squirt of calamansi or key lime or lemon juice.
Garnish with 1/4 c chopped scallions, toasted garlic, and hard-boiled egg (and, if you're in the Philippines, some dilis).
And there it is: a steaming bowl of comfort from a blending of cultures in colonial times. Yum.

I love Filipino food. I used to work night shift in the north shore of Massachusetts with a huge number of Filipinos, and the food that made the rounds...unbelievably delicious. Coming from a mainly Quebecois/Franco-American culture, I'm more used to poutine and Kraft products, so experiencing the food of another culture is always a wonderful treat.

keepbreathing - I am dying to try a really good poutine!

Nice to know of non-Filipinos who enjoy Filipino food. The nurses where I trained used to put out a spread for Philippine Independence Day, and it was like being back at a Filipino family party...