Kids, Computers, Coming of Age, Classics, and Other Kitchen Table Contemplations As I Get Dinner Ready 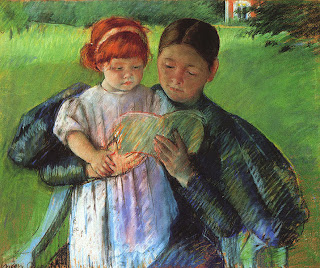 Heard an enjoyable program on NPR's Talk of the Nation today about Lizzie Skurnick's new book Shelf Discovery:  The Teen Classics We Never Stopped Reading.  I wonder if it's a "girl" thing, but I still have (and occasionally re-read) the coming-of-age books that I absolutely LOVED from my pre-teen and teen years.  There seems to have been a period between the '60's and '80's during which classic after classic got published; I wonder if young people today find similar books-for-life among their favorites today, beyond blockbuster phenomena like the Harry Potter and Twilight books - books whose pages they want to dog-ear and write in and bring to college and pass on to their children.
Having recently finished Neil Gaiman's The Graveyard Book (stayed up past midnight unable to put it down till the end), I am definitely putting it on my shelf of beloveds to pass on to my kids.  The Newbery awards are pretty good at pointing to well-written, fresh, compelling stories that can stay with readers for a lifetime.

The books I read during my childhood and adolescence had a profound influence on my development.  Writers read by young people can play such an important role in shaping the way they think - about almost anything.  If I had to credit one author for having helped form my character from the inside out, in complementary fashion to the work done by my family from the outside in, it would have to be Madeleine L'Engle, author of the classic A Wrinkle in Time.  I hope my children find authors and books that can do the same for them.
Posted by T. at 3:20 PM

Ha, I completely agree with your positive assessment of Madeline L'Engle's "Wrinkle in Time" -- what a wonderful book! I remember having nightmares about the book all through grade school ("It tastes like sand!")

Did you happen to like the movie adaptation or the other sequels / prequels to "Wrinkle in Time"?

I haven't seen film adaptations of L'Engle's or Babbitt's works. I've heard they're inferior to the originals - do you now if that's true? (Wouldn't be surprising...)

I love both L'Engle and Gaiman.

@T, I personally found the film adaptation of L'Engle's "Wrinkle in Time" to be inferior than than the original -- it's very hard to re-capture the easy malignancy of the man with the red eyes :)