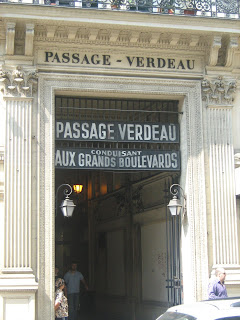 The Passages Couverts of Paris are among her hidden architectural gems.  They are covered passages dating back to the late 1700's to mid 1800's used then and now as shopping arcades. I hadn't heard of them before this year, but when I learned about them, I really wanted to explore them. 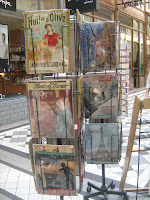 Each one has its own character.  Some are almost unchanged from their 19th-century gas lamp days; others are gritty and modern; some are fancy; some are casual and artsy.  Most of them are  tucked away in the area near the Palais Garnier (Paris Opéra), and their entrances can be easy to miss, but they're definitely worth a leisurely stroll if you've done everything else you want to do.
We started at the Passage Verdeau, connected with the Passage Jouffroy (my favorite) and the Passage des Panoramas, hit the elegant Galerie Vivienne, with its mosaic floor and fancy book stores, and finished at the Passage Choiseul, which is lined with Japanese take-out and discount clothing stores.  Here's a little photo album of our walk (the picture of art cards above is from the Passage Jouffroy, which has many charming storefronts, a wax museum, the Musée Grevin, and a little hotel, the Hotel Chopin).
Passage des Panoramas: 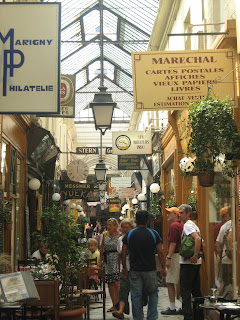 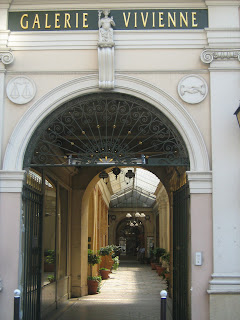 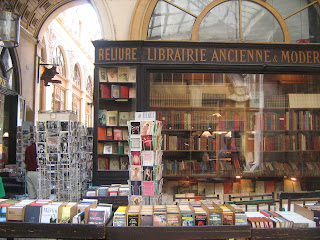 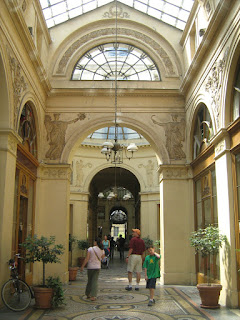 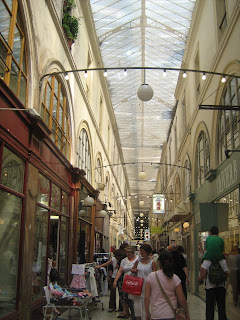 If it hadn't been so hot today I think we would have taken a stroll through the Jardin du Luxembourg too, a lovely garden among many in Paris.  But it's TOO DARN HOT!!! How can an industrialized nation not believe in a little A.C.?
I'm hoping it'll be cooler in the country. We're off to Normandy tomorrow to visit with more family.  I'm looking forward to the peace and quiet of a village that's barely even on the map.
Posted by T. at 3:45 PM

Maybe it's just that it's Paris, but the Holyoke Center arcade has miles to go...

Wow, those are great pics...I have never heard of that! Also, be grateful you're in warm weather...it has been freaking cold and rainy here all week!!! :(
Enjoy!