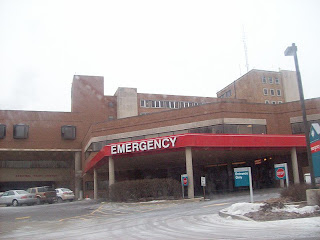 One day I was giving someone a lunch break and wheeling her patient to the O.R. with the circulating nurse when we heard over the P.A. system,
"Any available surgeon stat to the emergency room. Any available surgeon to E.R. stat."
That stopped us in our tracks for a second. The nurse and I exchanged a look.
"Sounds pretty bad," I said.
"Do you think it'll delay my surgery?" our patient asked.
It was hard to say.
We proceeded to the O.R., where we were met by the anesthetist who had been on lunch break. As we started placing monitors on the patient together, my boss walked in and asked me discreetly,
"The E.R. called. Could you go down there and help out?"
That's when I really thought it had to be bad. If they were making stat calls overhead AND individual calls to our department, someone was having major trouble.
When I arrived in the emergency department I looked for a busy cluster of people and found them in one of the trauma bays. The E.R. doc spotted me and said, "Are you anesthesia? Oh, good."
He gave me a brief synopsis of what had happened to the patient and what he had done to try to intubate her. Then he handed me the laryngoscope.
I feel like every time I write about a difficult airway I'm claiming it was the most difficult airway I've seen in my entire career. I'll qualify that claim this time by stating that while I think under more controlled circumstances this would probably not have been the toughest airway ever, this particular situation made it so. I was looking at a tongue so swollen it was about size and shape of a small Bosc pear, but reddish purple in color, and the person assisting me with suction couldn't suck the blood collecting in the patient's mouth fast enough before another a pool of it would collect.
At first I had a view of the bottom rims of the vocal cords, but the symptoms were evolving quickly, and pretty soon I was just looking at blood, blood, and more blood. I tried twice to pass a breathing tube, but though the tubes seemed to be brushing against the right landmarks, they just would not enter the windpipe.
My boss arrived to see if I needed a hand. Behind him, I saw with gratitude one of the ENT surgeons I had worked with earlier that day.
"Is the neck prepped?" I asked. The neck was prepped and ready for an emergency cricothyroidotomy.
Someone handed me a smaller endotracheal tube to see if I would have any luck with one last attempt at an intubation. By this time there was barely any use even looking into the airway; the tongue was enormous, and the blood kept collecting.
"You're starting to get some runs of v-tach," said one of the nurses.
I maneuvered the tip of the tube toward the trachea, or what I thought would be the trachea, advanced it a little, then advanced it some more while an assistant removed the stylet. The physician applying pressure to the cricoid cartilage raised his eyebrows and said, "You know, that actually felt like it went in."
"Someone listen for breath sounds, please," I said. Two stethoscopes popped onto the patient's chest. It felt great to have so many helping hands! It was one of the few times I actually didn't feel so alone during an airway emergency.
The respiratory therapists hooked up the bag mask ventilator and looked for the carbon dioxide indicator to change color, indicating a tube in the right place. Purple square. Breath given. Yellow square. We were in.
"All right. See you upstairs," said my boss cheerfully as he exited the room. The ENT surgeon waved. Not long afterward, I left my place at the head of the bed and let the rest of the team continue stabilizing the patient.
It was only after the tension of the situation had dissipated and while I was writing my note in the chart that I was able to watch some of the care-giving that was still going on for the patient. I had forgotten how many people can crowd into a tiny space during a code. There were three or four nurses, a respiratory therapist, two firefighters (who had brought the patient in by ambulance), and two physicians, not counting my O.R. buddies who had been there.
I realized I'd been the only female physician on the team when the E.R. physician asked if I was one of the nurse anesthetists. For once the stereotyping didn't bother me; it hadn't mattered during the acute situation, when the team felt like just that: a team. It's rare to feel like everyone's really in synch, truly working together, but I felt it that day - people were helping each other, focused, respectful, thankful. Definitely makes the job, and asking for help with it, a little easier, especially when the stress-o-meter is in the red.
Posted by T. at 8:26 PM

You go girl. You're awesome!

Just out of curiosity, I had a few technical questions -- I'm currently doing my medical school anesthesia rotation, and have *enormous* respect for professionals that can manage airways in critical situation.

Could you have used a bougie instead of a stylet to get the endotracheal tube in?

Thanks so much for sharing this story!

that was a nice job you did...we do come across some really difficult airways now on then...i think an LMA would have helped...it doesn't protect the airways from blood trickling down though...it does save life,i believe...

There were only two options for this patient: get her intubated or get her trached.

Yes, I do usually default to a stylet if I'm expecting difficult, especially if the difficulty is structural. I can't imagine a bougie getting around the gi-normous tongue in this case without getting totally smooshed(didn't even occur to me to try, and not even sure they have those in the emergency dept.); I also can't imagine feeling like inserting an LMA into the pool of blood that was collecting in the patient's mouth, unless we were really having trouble ventilating and HAD to temporize (not the case). The emergency room's so different from the controlled atmosphere of the O.R.; you don't always have the luxury of equipment options, time, or planning.

I was on the verge of asking Dr. ENT to trache the patient when that smaller endotracheal tube passed successfully, after a little blind maneuvering. We were all SO glad I didn't have to make that call!

Sounds terrifying, but a great story and testament to teamwork. The running clock of hypoxia can take your own breath away, glad you made it, too :)

Trauma or angioedema? Could have been both, I suspect. It's amazing to understand the "feel" that comes with regularly intubating patients in all shapes and sizes. You start to get a feel and plan ahead. It's this kind of experience that clearly helped you in this situation, blindly feeling your way where you feel the airway should be located. Awesome job.

Oh, and as far as the bougie...whenever I brought that up as an intern on ICU services or my ED rotation I'd often get a deer in the headlights look or simply asked "WTF is that?". Clearly you can't rely on some basics of airway management that are often available in the OR.

Thank you for sharing that experience with us. One thing that helps me when I have an emergency airway is to tell somebody to turn off the sound of the pulse ox. There is nothing more distracting to me than the sound of the pulse ox going down into the low frequency range. It just adds more pressure to the situation and causes more panic in the room (sat is now 45!). And it really doesn't matter what the sat is if you can't intubate the airway.

Any idea what caused her tongue to be so swollen?

Thanks, Fordo. We do know about the tongue; I figured it was best to leave as many details out as possible.

This hospital picture looks like Parkview Hospital in Fort Wayne In. Is it?

It's possible, but to be honest I have no idea. I got the image off Wikimedia after searching for emergency room photos.