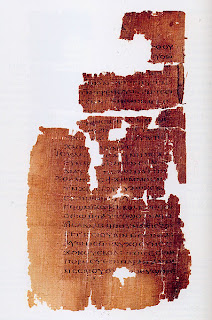 The religious scholar Willis Barnstone’s “The Restored New Testament,” which will be published in the fall, includes not only the canonical Gospels but also three Gnostic gospels: those of Thomas and Mary Magdalene, from Nag Hammadi, and the Gospel of Judas. But, if we’re going to start rewriting the Bible, where will that end?...

...All this, I believe, is a reaction to the rise of fundamentalism—the idea, Christian and otherwise, that every word of a religion’s founding document should be taken literally. This is a childish notion, and so is the belief that we can combat it by correcting our holy books. Those books, to begin with, are so old that we barely understand what their authors meant. Furthermore, because of their multiple authorship, they are always internally inconsistent. Finally, even the fundamentalists don’t really take them literally. People interpret, and cheat. The answer is not to fix the Bible but to fix ourselves.

Amen. Amen.
***
The above photo of a portion of the Codex Tchacos, the manuscript of the "Gospel of Judas" mentioned in Acocella's article, is a perfect symbol for our knowledge and grasp of Scripture, its history, and its meaning.  We can never see or know the whole truth; much of it is irrevocably lost, and what remains cannot always be fully understood or clearly interpreted.
I've written before about my views on Scripture.  I embrace a contextual rather than literal approach to the Bible.  But part of me does wish I had some kind of scrying glass and could look back on ancient times and see what went on, just to clear up some of the mysteries. I think many of the disputes and differences of opinion that exist today, though, were already alive and well even at the outset:

3As I urged you when I went into Macedonia,
stay there in Ephesus so that you may command certain men
not to teach false doctrines any longer
4nor to devote themselves to myths and endless genealogies.
These promote controversies rather than God's work—which is by faith.
5The goal of this command is love,
which comes from a pure heart
and a good conscience
and a sincere faith.
6Some have wandered away from these
and turned to meaningless talk.
7They want to be teachers of the law,
but they do not know what they are talking about
or what they so confidently affirm.              -1 Timothy 1:3-7

The one time I see a significant impact on my work in medicine from the difference between my approach to Scripture and a literal interpretation of Scripture is when I am asked by Jehovah's Witnesses to avoid blood transfusion even in the case of impending death.  Two Jehovah's Witnesses stopped by my house one morning, and I asked (for my own education) for some information on this, with what I hoped was a polite but clear disclosure of my intention to stick to my own views of faith and Scripture.  The discussion was informative and positive, and I affirmed that from most physicians' point of view, there was a strong ethical imperative to respect the wishes of all adult patients who are Jehovah's Witnesses.  But I'll admit that for many physicians this is one of the consequences of a literal reading of the Bible that's hardest to live with, if only because most of us are deeply motivated to do everything we know how to do in order to protect a life.
Posted by T. at 12:18 AM

Interesting. Appreciate your insight from a physician's perspective. From a legal perspective, the JW/blood transfusion/butchering of proper hermeneutics is also a sticky wicket ... let alone from a theological perspective.

K (the fabu blogger) turned me on to your website, and I'm glad she did. Look forward to following along for the remainder of the year!

Does that article comment on whether Judas gets a bad rap? In the story his betrayal facilitates the forgiveness of original sin for all of (Christian) humanity, and was therefore likely part of God's plan. I get confused by the implications of it all.

Hi, Dr. Charles - Yes, there's commentary on the bad rap Judas has had over the years, and the permutations thereof, as well as the far-reaching ramifications throughout history, etc. etc. but also some analysis of revisionist "rap," with special attention to the gnostic texts in which he actually comes out the favored one.

I don't think Judas needed to rat Jesus out in order for Jesus' execution to have transpired, frankly, but what do I know...

I agree; fundamentalism (though the definition seems to mean 'conservative religions that I don't agree with') has the potential to cause harm.

However, liberality is equally dangerous in scripture and in life. I've just been teaching John's Epistles and Jude. John and Jude, who well knew Jesus, were passionate about the dangers of false teaching...including the teaching of the Gnostics. Of course, if we discount their advice (or the advice of other Biblical authors) because they were ancients, we can simply discard the Bible altogether and stick to Deepak Chopra or whomever we choose.

The ancient Gnostics, according to the writers of the New Testament, denied the deity of Christ, suggested secret knowledge as the key to salvation, and taught that grace covered any intentional sin or sensuality, however egregious. Those tenets were very dangerous both to society and to the nascent Christian faith. Especially since it was born in an empire already full of pagan excesses, immorality and unbelief.

While parts of the Bible should perhaps be read metaphorically (as John Patrick says. See his website at www.johnpatrick.ca), much of it is literal.

And the writers of the New Testament, while ancient, tell stories that are far more consistent, well documented and historically verified than any other ancient text.

We must, as you say, be careful what we 'throw overboard.' I think the temptation is greatest because of our very democratic love of inclusiveness and our anxiety (perhaps selfishly motivated) about absolutes.

My prayer is that we who are believers are attentive as the Spirit guides our understanding of what is true and false. Otherwise, we rely on human reason alone, which is intrinsically no better than the reason embedded in the texts we try to interpret!

For believers, any understanding that relies only on secular textual interpretation or revision, without a supernatural insight, is doomed to mislead. Thus, you are wise when you say that we must remake ourselves...or at least, align ourselves with God more properly.

Thanks for always making me think! God loves it when we think, as evidenced by the scriptures admonition to 'be transformed by the renewing of your minds.'

Hi, Edwin - thank you for your thoughtful comment. I have read many of the Gnostic and apocryphal texts and can well understand why they are not considered part of the inspired "canon," in great part because the christology in many of them seems so deeply flawed and out of keeping with what the Synoptics and John, closer to the source, teach about who Jesus was/is. Reading what's NOT in the New Testament, actually, has given me a deeper reverence for the inspired inclusion of what IS there.

I agree with you, too, Edwin, that exegesis can't be a free-for-all in which anything goes and people can put whatever "spin" on things that they want. I love that quote from Romans 12:2 precisely because I think it calls every reader of Scripture to learn but learn HONESTLY - and by that I mean, to consider both scientific knowledge and scriptural insight with discernment and without the blind denial that can sometimes occur on both sides of the faith divide.

Thanks again for coming!

Talk about the "potential to cause harm" -

Just read this news item about the destructive power of literalist thinking:
http://news.yahoo.com/s/ap/20090802/ap_on_re_us/us_prayer_death

It's tragic that this child had to lose her life needlessly when in her community there existed the ability - some might even say the God-given ability, though of course some might not - for people to use science, learning, and education to protect her and restore/preserve her health.