A.
I love the A played by the oboe when an orchestra tunes prior to playing. How a single note can be so moving to me is a mystery, but moved I am. When I know it's coming I almost hold my breath waiting for it. Then it sounds, and it's as if it emits a beam of light right into my heart, drawing me in, drawing everyone else in, so that we're all turning, tuning, to that sound. It repeats, and when it does, layers of anticipation continue to be added as the different instruments of the orchestra prepare. The oboe is like a divine messenger signalling the start of something wondrous, a voice singing out: Listen, and enter into the story we have to tell; surrender your hearing and your heart, and we will open up a whole world to you, and you will not be the same.

Never was this more true than when we waited for B.U.'s April production of La Bohème to begin, knowing our little girl was backstage, happy and excited as part of the children's chorus. That starting pitch had special meaning for me as a signal that something magical was about to begin for her. When the music for Act II started and the curtain rose on Tijana Bjelajac's exquisite sets, which elicited the anticipated "Aah!"of admiration and applause from the audience every night, our daughter was right there in the center, dressed as a child customer at the Café Momus getting ready to enjoy a meal with her "family." Her best friend, one of the nicest boys we know, played her "brother" and got to sing the solo asking for "la tromba, il cavallin'." Singing and acting in Puccini's opera, especially that second act, must have been like entering a storybook come-to-life for them, an experience of joy and wonder that they will carry with them always.

B.
B is for ballet. Today I was listening to the ballet of ballets, Swan Lake, which as it happens is centered entirely around the oboe.

But before I wax rhapsodic about the oboe parts in Swan Lake, let me first kvetch about the Romantic Period.

I remember once right before performing the Peasant Pas de Deux from Giselle for a bunch of school kids, I thought to myself, "Smile! It's the 1800's, and you're a happy rustic, and when your lover breaks your heart and you die of that, little wings will sprout off your back."

Take the ballet Giselle, for example. Anyone can see that Albrecht is just a rich playboy taking advantage of a frail, naïve village girl. Poor Hilarion, who actually cares about Giselle and shows her mother some respect and affection, gets the short end of it. At the end of Act I, after Giselle meets Albrecht's fiancée and realizes that she (Giselle) has just been a whimsical diversion for him, her heart gives out (hmmm...rheumatic heart disease, anyone?), she goes mad, her hair flies out of its neat little "do" all over the place, she takes Albrecht's sword and stabs herself, and she drops dead.

Puh-leeze - the cad doesn't seem worth the salt her tears are laced with. She should have just kicked him to the nearest wine keg, stepped over his body, and asked Hilarion to forgive her for not seeing what was right in front of her all along. The weird thing is, when you're watching the ballet, you usually don't root for Hilarion. You're suckered into rooting for the rakish aristocrat, just because Giselle wants it to work 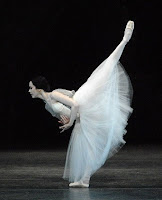 In Act II, we learn that Giselle's spirit is condemned to join the ranks of the Wilis (of "that gives me the wilis" fame). These are the spirits of women who die before their wedding days, some say betrayed by their lovers. They wreak their cold-hearted revenge by ambushing any men, guilty or innocent, who happen to wander into their territory in the forest and dancing them to death. So guess who falls victim to their vengeance in the middle of Act II: of course, our poor, loyal Hilarion, who was just going there to pay his respects at Giselle's grave, for heaven's sake. The Wilis dance him to exhaustion, then throw his body into a conveniently located bog.

Already this is so antifeminist you just gotta give up. The village girl gets duped and dies, and the "women warrior" types are actually petty, vindictive, pale-faced murderesses who don't have the maturity and good sense to just let go and move on.

What's more, Albrecht gets away. They're gonna try and kill him, too, but Giselle intervenes, begs for mercy, saves him by the power of her love. Should we be mad at how unfair that is, or should we admire her magnanimity? No matter. In the end Albrecht shows he has a heart after all and is capable of remorse, and Giselle flits back to her grave and disappears as dawn breaks.

Ah, the Romantic Period. You hate it, but you gotta love it. And why? Because it's YOU. You've been in love. Desperately, nonsensically in love. You've been betrayed. You've used people. You've been ignored or unappreciated like Hilarion. You've been enraged like the Wilis. People from stories in the Romantic Period really fell in love and fell hard. They cried their eyes out. They dared to feel and express all the emotions we're now supposed to think are so weak, inferior, and embarrassing, no matter how true to life and vital to human experience. I for one am glad that my kids (and their father too), like these heroes and heroines of a bygone age, are the sensitive, compassionate types who get tearful when Rodolfo sobs over Mimi's lifeless body in La Bohème. People today can deny the power of feelings all they want, try to downplay them, try to squelch them and claim it's more sophisticated to be free of them...but I think they're missing something.

So then there's Swan Lake. What more classic ballet among the classics is there, than Swan Lake? It's really not my favorite ballet; among the classics, I love The Sleeping Beauty more, even though it's shallower, more fairy tale and confection than love story. And among contemporary works, William Forsythe's In the Middle, Somewhat Elevated totally rocks. But Swan Lake will never die. It's familiar, like a home you know well and go back to just often enough, yet lofty, too. [But also eminently mock-able - it's too easy. The Ballets de Trockadero version of Act II is hilarious.] Here again we have a cast of frustratingly obtuse characters. Siegfried has his heart in the right place. He falls in love and vows to get Odette out of her ridiculous spell wherein she has to spend her life as a swan by day and a woman by night. But he screws it up. Someone shows up to a party at his castle looking exactly like Odette, but weirdly more seductive, less delicate, flashier, not as sweet. And he falls for it, the moron! It ruins everything.

Ordinarily, one might have absolutely no sympathy for either of them. I mean, how ridiculous, for all their problems to hinge on one or two functioning neurons in Siegfried's brain! But why are we drawn in, and willingly? I may be biased, but I think part of it's...the oboe. It opens the entire ballet with strains so full of longing, sorrow, lost love, and regret that you already know it's going to tell a story that's yours, from somewhere in an aching corner of your soul. After that tense moment when you know Siegfried is about to witness Odette's transformation, she

appears, and the oboe then takes over completely for a moment. Its voice is plaintive and lonely, like Odette herself. The oboe closes Act I and opens Act II with the theme that has become one of the most well-known oboe passages in classical music, and if you listen well you hear it just weeping. No holds barred. Love out in the open, vulnerable, raw. The voice of the oboe speaks directly into that place right in the middle of your chest that aches or seems to swell right before your eyes well up in tears.

I always wondered what created that sensation, the physical sensation in the body right at the heart when sorrow pierces it. No amount of cadaver dissection during anatomy class in medical school or observation during surgeries today has given me the answer. Sometimes there aren't any scientifically observable explanations for the workings of human sentiment.

C.
Call. I am on call this weekend. This means I woke up yesterday feeling mopey and had a mopey little corner in my heart all day, despite attempts to stay warm and upbeat. For this particular weekend I was in-house at the hospital for 24 hours yesterday, then on call from home all day today, then in-house again tomorrow for another 24, then off on Monday. I haven't found it less painful over the years to be separated from my family for call. But at least I got some oboe time in. My scales are a tiny bit faster and smoother. My new reeds are breaking in. I still stumble a lot at certain transitions and frequently feel like a total clod, but I also feel like I sound more like an oboe today. Must be the new reed!
Posted by T. at 7:07 PM