A Few Things You Should Almost Never Say to People

"Are You NUTS?!"
When I told people I was going to embark on medical school with a ten-month-old in tow, I got various versions of, "Are you friggin' NUTS?!" in response. See, I think you should only ask that question of someone who's about to jump off one of these (visited today at the Lake Placid Olympic Ski Area): 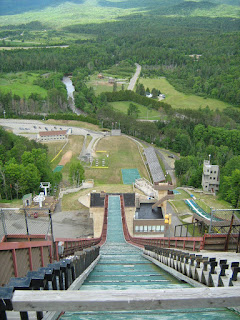 "We Think Your Child Might Be Retarded." [sic]
When I was four or five my kindergarten teacher expressed some concern to my mother that I might be developmentally delayed. After premature birth at 32 weeks in the early '70's, this wasn't out of the question, but when my mom asked why she suspected a problem, the teacher reported that I couldn't seem to pay attention and often looked blank.
"What are you teaching them?"
"Oh, the shapes and colors-"
"She already knows those."
"How to count to ten-"
"She can count to a hundred."
"The ABC's..."
"She's been reading the New York Times to us for weeks. Look, is there anything else?"
I don't think the meeting ended too well. Just for documentation my mom brought me to Clark Air Base to get psychometrically evaluated by the Americans. Everything checked out reasonably well. She put me in a different school.
"You'll Never Amount to Anything."

Sometimes I think conventional measures of ability and the tendency to judge people based on personality do little justice to the capabilities and gifts people actually have. I came across a wonderful letter to Stanford pre-meds by Michael McCullough, M.D., that I wish were required reading for ALL high school, college, and med school students and teachers. In it he reminds us: "Albert Einstein, Bill Gates, Winston Churchill, Thomas Edison, and Mother Teresa all had something in common: they didn't do well in school. Take home point: Don't rely on a grade point average to prop up your sense of self." We so often define our worth by our successes; it's high time we redefined success!
My favorite example of the school-"failure"-yet-genius is the story of Australian make-up artist Ann Maree Hurley. She kept telling people when she was growing up that she was going to be a make-up artist, and the best response she ever got was, "That's nice, dear." She failed her last year of high school and struggled through Wodonga Catholic College. But she persevered with her true love and has now worked as a make-up artist on all three Pirates of the Caribbean films. To that I say, you go, girl.
Oboist Caroline Plamondon posted a story on the Oboe BBoard relating how her school band teacher discouraged her from trying the oboe, because she was "too shy," then later tried to persuade her mother not to allow her to audition for the Montreal Conservatoire and two other colleges: "He called my mom and told her it would be a good thing if she discouraged me from entering those schools, because I didn't have any chance of getting in, let alone becoming a professional musician. Well, I got in to the 3 schools, chose the Conservatoire, studied there for 6 years before changing schools to obtain my Master's degree." SO THERE! Way to go, Caroline Plamondon!
***
When I was applying for pediatric residencies (before my anesthesia days) the chairman of pediatrics told me that Children's Hospital in Boston would be a "reach" and I shouldn't bother. In many ways he was quite right and the advice was practical. A couple of years later, after I had fallen in love with anesthesiology and switched my career track, I couldn't help laughing at the whole episode when I found myself practicing medicine at, guess where, the O.R.'s at Children's Hospital. The only way to know if you can reach something is to stretch for it.

This was the same chairman who, during my internship, after listening to me explain the molecular mechanism of hyperkalemic periodic paralysis, asked me in front of a roomful of pediatric interns and residency applicants to draw a diagram of the mechanism on the board. After a split-second silence, I said, "Sure" and walked up to the board and drew it. Then I left that program and started my anesthesia career.

But that's when learning became grueling.

During my first year in anesthesia residency I took an early leave-of-absence to help my husband and children move to the Boston area, and the day I returned, with my "skill set" still nonexistent (how I hate that phrase), or embryonic at best after only two weeks on the job, the attending physician I was working with sniped at me all day with insults before finally saying, "Maybe you shouldn't be doing anesthesia." When I looked at him in disbelief that a teacher could be so un-helpful to a trainee, not to mention in pain at being disparaged all day, he just emphasized, "Yeah. Maybe you shouldn't."

His labeling of me haunted me in various ways throughout my training, and despite some genuine teachers, like my residency program director, who were willing to judge me for the good progress I made and the expertise I attained by the time our training ended, there were still those who didn't have the capacity to look past that prejudicial incident and my early struggles during that challenging first year. Thankfully they weren't able to discourage me from taking good care of my patients - from the Peruvian child at Children's who put his arms around my waist and thanked me the day after I had to intubate him awake with a fiberoptic device, to the elderly Korean gentleman who spoke no English but conveyed his thanks with a squeeze of my hand. It was in these unseen, uncredited moments that I felt I was truly a physician my program could be proud of.
To the teachers who actually TAUGHT, I send out a heartfelt thank you, for bringing me to this successful place: 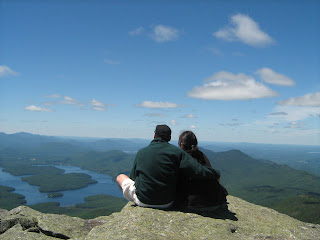 New to your blog. I've enjoyed reading it so far. Were you a "non-trad" med student applicant? I am considering med school (I'm in my 30s). What was your path to med school? Is there a post in your blog where you wrote about how you got to med school?

thank you...that made me smile more than you will ever know....

Thank YOU for taking a moment to be here!