Three Men and a Ghost Story 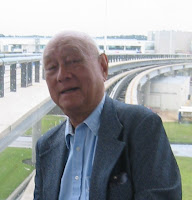 Happy Father's Day to the wonderful fathers in my life:
My own, who, besides being a brilliant scholar, historian, and writer, is a loving person, a gentle advisor, and a loyal friend, always there with an ear to listen, a question that shows you he cares about what you're saying, or a kind word when needed; 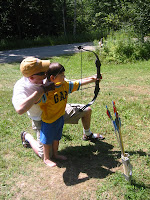 My children's, who has never shied away from taking part in the day-to-day scut work of parenthood, the open-hearted delight of playing with the kids' toys (whether or not the kids are actually around), or the challenge of being their closest teacher; 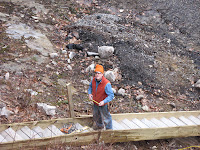 and my husband's, a true Renaissance man, who has the gift of making people feel welcome, not alienated, and whose help you can ask with almost anything - an academic paper on Malraux, building an addition to your house, emergency child care, multilingual music, dinner on the fly, furniture-building...

These are what I call REAL MEN.

This morning as I was making quiche for Father's Day brunch I played with the idea of calling today's post, "Real men do eat quiche, change diapers, cry at sad movies, and love faithfully." That about sums it up for me.

Real men use their minds as well as their muscles. They are turned on, not turned off, by a partner's intelligence and talent. They have the courage to have integrity. They fight for human rights, in ways large or small, and teach that kind of honor to those around them. They work hard. They're not shallow. Real men have a sense of wonder and reverence as well as a sense of humor. Real men show respect and kindness and don't use hate or jealousy as an excuse to exert control or act with violence or cruelty. Real men are free of the needy arrogance of living for others' adulation, for material or social gain, or for self-seeking pleasure or self-glorification. Real men aren't afraid to be gracious and aren't embarrassed by the need to keep learning; in fact , they seek that kind of growth every day. Today such men deserve to be celebrated!

My mother grew up without her father. He died (of TB, we think) when she was 10 months old and her mother was 24 - the age I was when I got married. Young.

But when my mother was 3, or so the story goes, he came to visit her.

I love a good ghost story. So do most Filipinos, and they also enjoy believing in them, without all the usual rationalist excuses or attempts to come up with "natural explanations." People in my country see spirits and don't think twice about it. No one diagnoses the seers with mental problems or tries to come up with some DSM-IV category like, "transient, culturally-induced psychosis." It's an accepted phenomenon. One of the people in our family who has this gift of sight is a practicing physician who graduated at or near the top of her class. Intelligent, talented, rational, emotionally stable.

As was my mother's mother, in her time one of the most cherished professors of history at the University of the Philippines. She was sharp, and she knew her stuff. She lectured entirely without notes or prompts of any kind. She saw her dead husband, years after his death, once or twice, and once even had a conversation with him, then never again.

It happened like this. She was inside the house doing some work while my mother was in the yard. She had the window open to keep an eye and ear on her little daughter, who was playing with a ball. All of a sudden she heard the little girl laughing delightedly and saying, "Throw it! Throw it!" Alarmed that a stranger might have come upon them, she quickly looked out the window...and saw her husband playing with their child. Her husband who had died three years before.

I loved hearing this story growing up, and I used to ask all the older women in my mom's family to tell it again and again. My own grandmother, a very private person, would just smile sweetly and nod when I asked her questions but as I recall she said very little about the incident. Someone once told me that she confronted him about why he kept returning, and with what seems to have been characteristic cheek - I can almost see the twinkle in his eye - he replied that if suitors could visit her (which they were doing), so could he. My grandmother was quiet but strong of purpose. There was work to be done and life to be lived; she wanted peace for her husband, herself, and her daughter. She put an end to her suitors' visits, and thus to my grandfather's visits as well.

American psychiatrists would have a field day with a story like this. They would dismiss it as a grief or guilt apparition, a psychotic illness, depression with hallucinations, or what-have-you. My Filipino relatives and I keep it simple. My grandmother saw the spirit of my dead grandfather for a little while; that's all. No different from the occasional visitors my uncle, or cousin, or a family friend sees, benevolently taking in the goings-on in our family home.
The day my other grandfather died of a cardiac event in the hospital, my nanny says she saw him bending over my crib in the nursery at home. I guess Filipino dead just LIKE to visit their little ones. I chalk it up to a father's love, a grandfather's affection, the possibility that even the death of the body doesn't extinguish that energy completely. 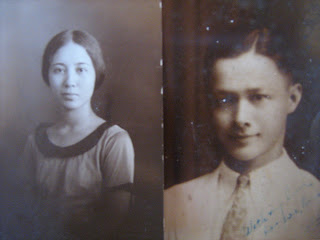 After living for 18 years in Africa, I'm also inclined to listen carefully to those who have such experiences with spirits.

I'm so glad you put it that way - that they have EXPERIENCES with spirits. I dislike the tendency in the United States to label these phenomena with diagnoses - who are we to say, in fact, that we can define another's experiences? I don't know exactly what's up, but SOMETHIHNG's being experienced by some people, and I'm intrigued!