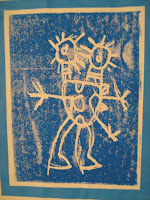 My son brought home this print entitled "My Clever Creature," which he made at school. I love it.

He doesn't realize it, but it looks just like Selah. Selah is a little character that I imagine popping up to ask me questions about my world whenever something astounds me about people, or makes me shake my head in disbelief. I am too old to have an imaginary friend, but lately my mind has conjured little Selah up quite frequently, usually in the car during my long-ish commute, when listening to NPR becomes a quick education on all sorts of issues from around the world.

Lest it seem the stress has finally made me crack, let me affirm that this little guy is completely imaginary, a character in a little mental game I play that could be entitled something like, "How to Explain Earthlings to a Visitor from Another World." I used to think of him as a "Little Yoda," but his English was too good.

I named him after the Hebrew word that recurs among the psalms calling listeners or readers to pause and reflect. Selah is not of this world, and the questions he asks about our world do make me stop and think.

In the past when Selah has materialized in my mind, he has asked things like,

The thing that made me shake my head in both wonder and disbelief today was an old article from the Washington Post detailing virtuoso violinist Joshua Bell's experience as a busker at the L'Enfant Plaza Metro Station. Thanks, by the way, go to Elaine Fine and L. Lee Lowe for passing this story along. I found this project astonishing as a social psychology experiment as well as a philosophical study about the arts and artistic talent.

Joshua Bell, who commands ticket sales upwards of $100 per person per concert, agreed to play at the metro station at rush hour as a "street musician" and to let cameras roll to see what would happen. So there he was, a world-class and world-famous violinist playing Bach's "Chaconne" from the Partita No. 2 in D Minor on a three-and-a-half million dollar Stradivarius. What happened?

What happened was, Joshua Bell was ignored. He was playing for FREE right in front of them, and most people rushed on by with not so much as a glance his way. No one paid any attention. No one, that is, except for the occasional child who passed by, being pulled along by a rushing parent or caregiver. And a handful of adults, maybe three or four.

After reading this article, I played "what would an alien visitor think?" and in my mind Selah and I went back and forth as follows:

The article's author, Gene Weingarten, wrote (and I really hope it's okay to include this here):

"It was all videotaped by a hidden camera. You can play the recording once or 15 times, and it never gets any easier to watch. Try speeding it up, and it becomes one of those herky-jerky World War I-era silent newsreels. The people scurry by in comical little hops and starts, cups of coffee in their hands, cellphones at their ears, ID tags slapping at their bellies, a grim danse macabre to indifference, inertia and the dingy, gray rush of modernity.

"Even at this accelerated pace, though, the fiddler's movements remain fluid and graceful; he seems so apart from his audience -- unseen, unheard, otherworldly -- that you find yourself thinking that he's not really there. A ghost.

"Only then do you see it: He is the one who is real. They are the ghosts."

This piece made me think longer and harder than I have in a long time. Then I put in some violin music and just listened.

I have since read SawLady's and Elaine Fine's responses to the Bell Busking Bust, and I am relieved there's more to the story than the "spin" placed on it by the Post. Thanks to these talented and experienced musicians for teaching me more about the art of busking, and helping me reflect on things like approach to one's art, expectation, and context!

I do still think people should at least have LOOKED UP once or twice and acknowledged the musician's fine efforts, though...I mean, it was Joshua BELL...

Makes me wonder how often I walk by people and never see them. Bill Clinton recently gave a graduation speech about noticing the guy next to you on the street. I need to work on this more! Gives new meaning to the New Testament words, "You listen, but you do not hear."
Posted by T. at 10:30 PM

Umm, as a musician etc I was not astounded. Situation normal.

But SHOULDN'T be normal. I think we should all be astounded at ourselves when we fail to notice good music or good of any kind.

It shouldn't be normal, but musicians have come to accept that what they do only matters to a relative handful of people. What really matters is that we continue to practice what we do in order to make some corner of the larger world a better place and to maintain our own happiness.