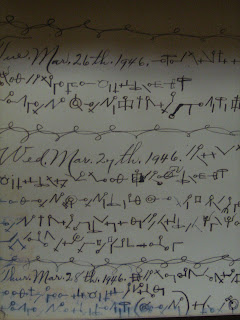 One of my favorite books when I was in grade school was a book about secret codes and ciphers called How to Keep a Secret. Not only the act but also the idea of writing fascinated me - that our thoughts could be made visible on the page, with symbols. Ciphers had special allure because you could put those thoughts out into the world, then conceal them again - how intriguing!

The reason I mention this is because codes and ciphers came up in conversation during our visit to the wonderful Adirondack Museum, probably one of the nicest museum experiences we've had as a family. It's a bit like the Shelburne Museum in Vermont, with lots of historic memorabilia and artifacts related to human labor and achievement, beautifully displayed, but more compactly laid out than at Shelburne, with more focused exhibits.

There was an interesting replica of pages from the journal of Adirondack hermit Noah John Rondeau, who wrote his journal in cipher, sparking a conversation between my family and me about writing for oneself only, and why someone might do that. Ultimately we may write most genuinely when we write for no audience other than ourselves...but to block access so actively seems to counteract the sharing process I associate with writing, although of course I've also discussed writing as tilling the garden of one's own mind, a way to shape and develop one's thought processes...

Code #2: The "Sliver" (a true medical code situation, potentially, if I ever saw one!)

Elsewhere at the museum I was amused to find a charming cottage that had been the dwelling of the doctor "on-call" at a place called Camp Cedars. If only all call-rooms could be so quaintly appointed! Other highlights included a walk-through rail car, the carriage Theodore Roosevelt rode at breakneck speed after McKinley was shot and Roosevelt got the news he was president, a picnic lunch with a view of Blue Mountain Lake, and an exhibit on loggers, which being a fan of log homes I found especially valuable. I was startled by this depiction of an injured logger receiving general anesthesia to remove a "sliver": 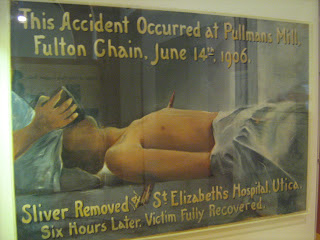 Not something I want to see rolling into my O.R.!

After visiting the Martyrs' Shrine yesterday we spent the night at the Mohawk Indian Bed and Breakfast, also known as Kanatsiohareke ("ga-NAH-jo-ha-LAY-gay"), meaning "place of the clean pot" after a basin formation in a nearby stream. The lovely Mohawk woman who runs the place, Emily Tarbell, is the seventh of seventeen children (!), and a great story-teller. She cooked us a hearty country breakfast during which a man named Rob stopped by just to tell a delightful story about a runaway 800-lb bull he was trying to transport. It was beautiful to hear little bits and pieces of the Mohawk language in the conversation, and luxurious to be able to talk and eat without watching the clock. I would so love this slower pace, rich in human contact and story-telling.

I couldn't help but wonder, all these centuries later, if there is still some tension and pain between the Mohawk and other area residents. As much as I cherish the life of René Goupil and his companions, and admire how they demonstrate real growth in their anthropological understanding (as shown in the writings of Jean de Brebeuf for the Jesuit Relations), I am not oblivious to the fact that they came as outsiders, albeit with good but in many ways misguided intentions, and basically contributed to the loss of a native culture and people, the Huron. Nor do I have any romantic, uni-dimensional notions of native tribes in the 17th century as placid tree-huggers; from what I've read and heard, they had deep spirituality and reverence for their world, but they were also plenty violent with prisoners of war and committed atrocities that might turn the stomachs of the most battle-scarred warriors today. Nothing is simple, and over 350 years later this holds true. There was plenty of both heroism and guilt to go around. But the fact is, Europeans and their descendants claimed for themselves an unjust portion and are still enjoying the fruits of that claim today.

I find myself caught between two sympathies - my admiration for Jesuit faith and work ethic, with special affection for René, and my admiration for native peoples and desire to learn from their wisdom. Meeting Emily was a real blessing, a bridge. I cherish the connections we've made, in our minds and hearts and with others, stemming from our encounter.