I am very sad about the death of opera singer Jerry Hadley, who shot himself with an air rifle at his home in Clinton Corners, NY on July 10 and suffered severe brain damage. He was on life support at St. Francis Hospital in Poughkeepsie until July 16 and died yesterday.

I remember being a young girl watching a concert on TV with my mom, and after hearing him sing - he was then "new" to the scene, as I recall - she and I looked at each other and exclaimed, "WOW, who is THAT?! He's amazing!"

He was only 55 when he died. I cannot imagine how anguished his loved ones must be.

I have scanned through many posts and web articles about suicide. So many of my search "hits" opened their discussions with reasons people try to kill themselves - despair, lost love, money problems, low self-worth, and any number of contributory factors. But these are not the ultimate reason people commit suicide. I was relieved when at last I found a site that states the truth from a medical standpoint: "Simply put, people commit suicide because they are ill."

This is not an insult, any more than saying people with diabetes have an illness, or people with cancer. In fact, depression, be it major depression or manic depression, is considered by many psychiatrists and psychologists to be not just an illness but a potentially life-threatening illness.

No, you can't tell someone to just snap out of it and pull themselves up by the bootstraps, unless you also think you can make someone's islet cells secrete more insulin somehow, without medical intervention.

Neurotransmitter deficiency can be just as lethal as insulin deficiency. We are, to a degree many people don't want to acknowledge, at the mercy of these chemical messengers, for cognition, perception, and emotional well-being. 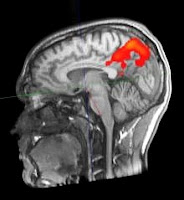 The problem with accepting mental illness as a physiologic reality lies, I believe, in the nature of thought. Thought is a very real presence for most people, yet it cannot be seen or physically grasped. It seems otherworldly, mysterious; we don't know what it's made of, but we know it's there. In part it's made of cells and electric charges and neurotransmitters, but these are so physical, and thoughts are so...ethereal. Surely despairing thoughts can be healed with something other than medicines for a physical process such as the biochemical pathways between serotonin and its receptors? Surely thought is not so bodily?

Well, it IS, like it or not. Mind is body. We would like it to be more, but the evidence we have so far is it's all right there, in the workings of the physical brain. Take the case of Phineas Gage: all it took was an iron rod through his frontal lobe to change his character completely - all those elements we think are part of some more metaphysical realm, like virtue, and personality, all of that, very physically inhabits the frontal lobe. Frontal lobe syndrome has been observed with traumatic brain injury, strokes, tumors. People all of a sudden are no longer who they once were. So who are we, really? Personality, taste, character - these all depend on the little molecules bouncing around inside our frontal lobes. Beyond those - who am I?

Through medicine I have had to confront suicide up close. The trauma ICU was a charnel house for terrible stories. Even now I don't breathe comfortably any time a guy in my family goes up a ladder, and I can't even begin to count the patients who lost the use of their limbs because of motorcycle accidents. But the patients who had attempted suicide made me especially sad and feel particularly helpless. I had to take care of a young woman who had jumped off a building and whose mother kept hoping for signs that she was "still in there somewhere." On my last ICU call I also had to admit a man who tried to electrocute himself on the high voltage line of the subway system but managed only to burn half his face off. It was awful.

I cannot help being offended by Sean Kingston for trivializing suicide in his current hit song (on a completely borrowed base line) "Beautiful Girls (Suicidal)." Suicide is tragic and terrible, not something to toss around in a pop song about getting rejected by people you're regarding merely as objects anyway.

If you know people who might be depressed, please don't blow them off for being "down" or treat them with exasperation or contempt.

If you think you might want to end your life, PLEASE don't, please get help.

You have made an interesting observation. Humankind craves explanations. In the pre-biologic age, all mood (and thought!) disorders were assigned experiential, behavioral or moral (yikes!) etiologies. Even though we are coming to understand more, we are still doing this. Sure, your dog dying can leave you transiently depressed, but when you wake up depressed, out of the blue, that doesn't mean you need hunt for an experiential cause. I know you understand this, but try to get a lay person to "get it" Even our non-psychiatric colleagues frequently don't understand. The interaction of mood and cognition is so interesting. I am an opera fan stranded in Las Vegas, and was sad about Hadley, too. My wife and I saw him at the Lyric twenty years ago when he was new. Inspiring presence. It's all too sad...

I would never trivialise suicide and, like many people my age, have been close enough to some who have taken their own lives to understand the tremendous burden of grief and guilt and incomprehension it leaves behind. The Jake to whom Mortal Ghost is dedicated is my oldest friend's son, who shot himself at age 15. However, I'm unwilling to regard all such deaths as the result of illness, which is a very deterministic view of human nature. Will and free choice aren't mere illusions, I believe, and under certain circumstances a suicide may even be the better choice. Though it's probably true that depression is involved in most suicides, it certainly doesn't follow that it underlies all of them.

That said, I agree that it's necessary to regard depression as potentially life-threatening.

Thank you for your perspective. While I cannot share it, for the most part, I think honest discourse about this is crucial.

David L. Conroy's statement is a good summary of my own position: "Suicide is not chosen; it happens when pain exceeds resources for coping with pain" - though I would exempt suicide bombers from this definition.

Free will may not be an illusion, but not all human beings have the true capacity to exercise it, and certainly not all the time.