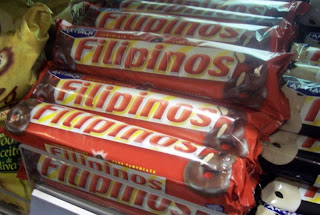 I remember these cookies (image used by permission). In 1999 the Philippine government protested their name and the reference to them as "brown on the outside and white on the inside." I've also seen a petition on the net against purchasing or eating them, though it should be noted that not everyone takes immediate offense at the name.

I understand the protest, but I also think Filipinos need to examine their attitudes toward "white-ness." Skin-whitening cosmetic products are disturbingly popular in the Philippines, and many people openly speak of a fair complexion and European/Western features as beauty ideals. I don't know the answer to this, but do the exaggerated Caucasian features in Japanese animation stem from similar attitudes?

And then there's that other touchy / forbidden topic: why has the Asian female/Caucasian male couple become almost cliché? (There are numerous internet reflections on this phenomenon.) I am part of the trend. I remember how violated I felt when an Asian-American man in my residency program saw a picture of my kids and then questioned my reasons for marrying my husband, implying that his white skin trumped any other reasons I might have fallen in love with him, like his values, his compassion, his intelligence, and his good character.
I was horrified but not surprised when, on my husband's first visit to the Philippines (we were not yet married at the time), a matriarch in my family exclaimed in English, upon meeting him: "A foreigner!" Then, in Spanish "Va mejorar la raza" - [if you marry him,] he'll improve our race. What an ignorant thing to say - and the worst part about it is if it had been pointed out to her as such, she probably would have said, "Why? I'm just speaking the truth." Good thing my husband was well-educated about colonial history, post-colonial culture, and the related social issues, thanks to his studies and travel experiences.

So, are we proud of our "ethnic identity," or do we envy another? Did we express outrage at Filipinos cookies out of self-respect, or does the name bother us (or not bother us) because for some Filipinos, it actually contains a grain of truth? Sometimes there can be a fine line betwee self-love and self-loathing. I think the major problems with the cookie name are its use of skin color as a way to categorize people and its failure to represent Filipinos in general in a meaningful way. But I also think there's still a lot of ambivalence in our country around these identity issues. One commentator notes:

"I remember it being reported in the press, one person saying she (as a Filipina herself) thought there was nothing wrong with [the cookie name] since, (she was of the opinion), most Filipinos wish they had been born white anyway (!) Of course, many others did and do not hold such a view.
"But one wonders why anyone would say in the first place that any Asian would wish to have been ‘born white’. Is it a reference to culture or simply to the standard of living associated with the 1st (read: white) world? I think it is true to say that Filipinos are viewed by some other Asians as being more westernised than them, particularly with regard to American influences. And often this is viewed as something negative."
This commentator hypothesizes that a desire for "white" culture or living standards lies at the root of white-envy, but I thinks it's simpler: looking white, for whatever reason, seems to have been an advantage in the world. So in several countries, not just the Philippines, people buy creams or lotions to rub onto their skin to lighten it. What I don't understand is why racism of this kind - not just the perceived inferiority of non-whites by white people, but also the perceived superiority of whites by non-whites - exists and persists.
Posted by T. at 11:32 AM

Ahhh race! It will forever be a difficult topic, I think.

I had never heard about skin-whitening before. And here we white folk are always trying to get darker. Go figure.

Perhaps it's just that we are never happy with who we are.

So many of the people I know suffer from "white guilt" and I'm not sure what to do about that ... I am white. I have no alternative. I was born that way. I've been uncomfortable with being white. I've felt guilty. (Guess I'll just blame my parents!) ;-)

Hmm. But maybe "white guilt" is simply another copout. I wonder.

Anyway, I am loving your blog.

(My daughter's significant other, btw, is Filipino-American. Most of the marriages I know are the opposite of what you mention; the man is Asian and the woman is Caucasian. Do you not see that at all where you live?)

Sorry about the ramble ... not sure I'm making sense.

Not as much, but it may be that we don't have as diverse a population up here in New England!

Does he cook Filipino food for her? I am dying for some native eats! Even our more "Western" sweets taste special, somehow...

I was thinking this morning about biology...I vaguely recall learning in some genetics class that the healthiest mating combinations, from a genetic standpoint, are those that combine genes to produce the greatest variation...so when my husband and I got married, we were like, "Hey, the kids should be in pretty good shape, with genes from across the world!" Part Finnish, French, English, Spanish, Chinese, Filipino...

I'm rambling too, but I think this topic needs some good-willed rambling and reflection, over various aspects of it - biologic/antrhopological, sociological, psychological, etc. Thanks for reading, and say "kumusta" to your daughter's honey for me!

Our daughter's boyfriend doesn't make Filipino food, as far as I know, nor does he speak the language. His mother died when he was quite young (10) and I wonder if things would have been different if she had lived.

He's such a wonderful man; so caring, and loving to our daughter.

Now when I was growing up I remember the "older folks" (people my parents' ages) would shudder at the idea of a "mixed" marriage. (I hate that term, to be honest ... we are all human, yes?) The famous (and, to me, frightening) line was, "But think of the children." I'm not sure what that was supposed to mean.

I think nearly everyone struggles with a bit of racism. I know I've "surprised" myself sometimes ... and been rather disgusted by things that I would think. Sigh. I hate when my thoughts are so not what I want them to be. Double sigh.

I just want to be perfect. Is that asking too much? ;-)

(Had to fix a glaring grammar error there...here's what I wanted to say:)

You're not alone! I think if we were all honest with ourselves we'd have to admit some of those "surprisingly" judgmental thoughts creep into everyone's mind...

When I read two passages side by side, I have an idea of the kind of perfection that we're supposed to aspire to, and that it's POSSIBLE to attain: "Do not judge," and "Be perfect as your heavenly father is perfect." I believe the world would be incredibly different if we were to use our gift of discernment - the fruit of the "tree of knowledge," knowing what is good and what is evil - not for its bad aspect, passing judgment, but rather for its blessing, which is recognizing each other's equal worth and beauty.

The Philipinos endured tremendous hardships under Japanese occupation 63 years ago. My Philippine nurses (there are many in Las Vegas) laugh together all the time, and look out for each other. The male Philippine nurses never have a chip on their shoulder. I hope all the Philipino-Americans are proud of their heritage. They ought to be.

My parents are survivors of that occupation, so I grew up with some very personal stories from that period. As "Americanized" as I have become, one of my Filipino colleagues pointed out to me, "Yet when your plane lands in Manila, you still recognize that scent in the air" that natives know and love - an aroma of bamboo and jasmine and, somewhere in the background, some delectable native food being prepared...

hello there! I am a filipino, and while reading this entry in your blog I was quite guilty of the part saying that we filipinos are brown but "white" inside, cause it was also stated there how "skin-whitening cosmetic products are disturbingly popular in the philippines". Well, it's just maybe we have our own reasons and as for me, during my first year in college I became a swimmer and after one year of training I felt like I wanted my color back, so I used this whitening soap.. haha! But you know, during summer here in the philippines being tan is still in, actually I like being tan when I get it naturally from the heat of the sun with the mark of my swim suit and stuff.. haha! To make this short, I just can't believe how people generalize filipino people wanting to be white, cause maybe I want lighter skin but it doesn't mean that it will make me less of a filipino, I am very proud to be a filipino and yes, asians became more westernized but I still love how we asians preserve our culture.

hey if you don't mind, I want to link your blog in my multiply site. thanks! -tats