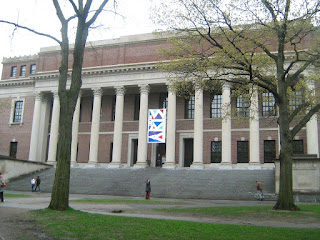 Hundreds of talented students involved in the visual and performing arts share their (sometimes world-class) gifts with the public during this amazing festival, during which most events are FREE. There is no better deal than that in this city. 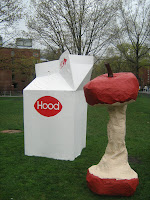 and one of my daughter's friends yesterday, and it was with a bittersweet sense of love and pride that I strolled through campus, visited a number of performance venues, and reminisced about performing in the very first Arts First ever, established by actor John Lithgow in 1994, my senior year. Some of the groups that performed yesterday - like the Harvard Ballet Company and the Harvard Pops Orchestra, which started us off with a rousing selection from the soundtrack to The Lord of the Rings - were founded by students who were my contemporaries and friends. 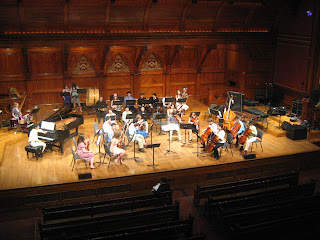 Very often productions by gifted college students have something the flashier professional productions in New York, L.A., and London can't capture. A fearless energy, passion, and raw exhilaration in the midst of costumes put together at home and soundtracks scraped together on laptops. The best production I've ever seen of the Gilbert and Sullivan operettas and of Arthur Miller's The Crucible have been ones put together by Harvard undergrads, and the best Amahl and the Night Visitors I ever saw took place in a tiny little church in Arlington with simple props but a great deal of musicality and heart. Bigger, more prestigious, and more expensive aren't always better! Then there are the affectionate shouts of support from roommates and buddies in the audience - where else can you get that? 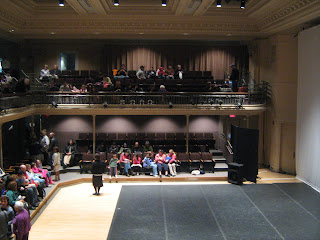 I was thrilled to see that the dance portion of the festival, which still takes place in Lowell Hall as it did when I was a student, was one of the most packed events. The line waiting to get into Lowell Hall stretched halfway down the block. It consisted of various campus dance groups performing ALL AFTERNOON in 20-minute blocs; we stayed for three different segments which included Irish step dance, stunning hip-hop by EXP, energetic numbers by my former company (Mainly Jazz Dance Co.), absolutely gorgeous ballroom dance numbers by the Harvard Ballroom Dance Team, break dancing, Philippine folk dancing (woo hoo!), and modern dance (we missed the ballet, tap, and capoeira segments, unfortunately). As I watched from our seats on the upper balcony I could almost see ghosts of myself and my classmates superimposed on the performers below, diaphanous visitors from our past, moving with the music under the colored lights, reminding me of a life and energy I often forget I had. 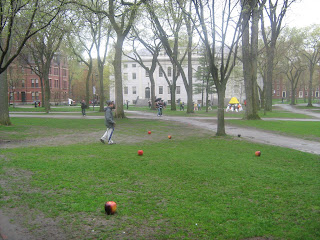 One of the most memorable offerings was an outdoor interactive exhibit in Harvard Yard which consisted of lantern-like sculptures made of upside-down tissue boxes containing messages as well as extra-large apples strewn about under the campus's stately trees. There was a sign there that said "Take One," so of course my son scooped up an apple 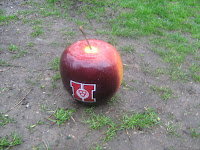 , encouraged by one of the artists of the exhibit, Peter Hedman, class of 2010 (internet research is a wonderful thing!). He's a thoughtful, creative, talented man who will no doubt go far. The other artists who helped create the exhibit were Tom Lee (from the Office for the Arts) and Yichen Feng ('10). I wish I could describe how captivated passersby were with this work, peering into the "lanterns" from below and delightedly taking pictures of the apples under the trees, enthralled just as passersby had been during last year's festival, when Hedman and his colleagues, under the tutelage of local artist and instructor Gary Duehr, put together an interactive exhibit entitled "Ten Red Phones," consisting of red telephones around a central sculpture. What is art but creative work that elicits a strong response from people? In this regard the work by Duehr's students has definitely met with great success. 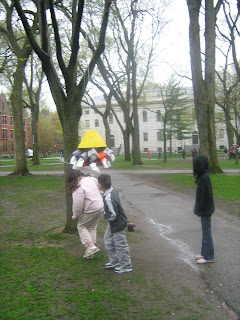 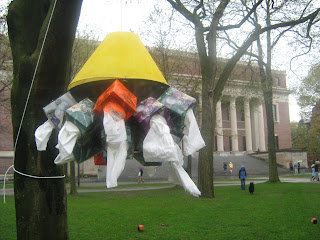 The great thing was that the art work extended its presence throughout campus and had a life outside its original home in the Yard. ALL AFTERNOON people responded to the giant apple under my son's arm with, "Whoa! Is that REAL?!! It's HUGE!" 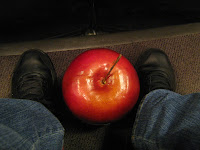 and asked us questions as we found spots for it at our feet at the concerts, juggling event, and dance performances that we attended. I was happy for the artists, excited that their work had such an extended reach.

We finished up our afternoon listening to my favorite Harvard a cappella group, the Harvard Opportunes. As was true when I was an undergrad, the group today 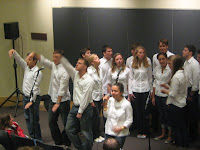 still has some of the strongest voices on campus. I was glad my daughter had a chance to see young adults enjoying their musicianship in an environment in which they were also expected to excel academically.

I envy these undergrads, who like me and my friends probably won't fully realize, till they bring their own children back to Arts First in fifteen years, how precious this opportunity is to pour themselves completely into their arts and to explore their creativity with such abandon. But mostly I am inspired, and I feel that the work of art continues on in us even after some of us leave a more active participation in it, through our continuing love of the arts and the passing-on of its practice and appreciation to our children. 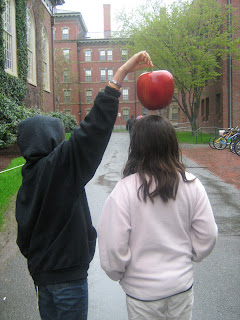 Your heartfelt description of the weekend was a delight to read. We would have loved to have been in Cambridge for the weekend. The public art installation was intriguing and we're pleased it survived the rain. Hopefully, we'll be there next year.

Thanks for stopping by. Arts First is definitely special. Hope you make next year's festival!

Thank you for writing such a nice description of the Arts First weekend in Cambridge. Peter Hedman is my brother and I am so proud of what he has done. I am looking forward to attending next years event!

I was so honored to meet your brother, and my kids and I look forward to enjoying more of his work!