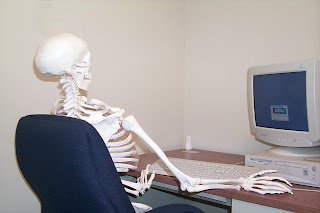 In the space of one call (yesterday) I
-anesthetized a woman for a brief gynecologic procedure (7:30 a.m.)
-did post-op rounds, pre-op interviews, and gave breaks to colleagues
-performed a spinal right after a nurse was inexcusably rude to me; then helped an expectant mother through her urgent C-section (mid-morning)
-anesthetized another woman for another gynecologic procedure (mid-day)
-in the afternoon, took over for a colleague in the vascular surgery room...and found myself still there, 5 hours later, in the same procedure to de-clog the femoral arteries of a (relatively young) woman who had smoked SOOOOOOO much that her blood vessels were practically destroyed and the circulation to her legs was compromised
-got paged by the obstetric floor to do an epidural which I could not do because I was stuck in the 5-hour vascular case
-wrangled with my colleague who was supposed to be the back-up call person but did not want to come in and do the epidural while I was stuck in the O.R.
-wolfed down a ham sandwich - my first real food that day - that the nurses had set aside in the fridge from an untouched patient tray
-brought an elderly man to the operating room (by now 8:30 at night) to have his gangrene-afflicted extremity amputated above the knee
-got paged stat to the cardiac intensive care unit to intubate a woman in respiratory failure just as I was placing monitors on the amputation patient
-ran up to the CCU, where the nursing supervisor tracked me down by phone and insisted on speaking to me as I was talking to the covering physician (and the nurses were getting medications ready) because she wanted to know why it was taking "anesthesia" so long to show up for the epidural on the labor floor

-intubated the now-truly-distressed woman
-ran back down to anesthetize the guy for the ampuation
-wheeled him in stable, comfortable condition to the recovery room (close to 10 p.m.)
-dealt with e-mail problems
-talked to my husband on the phone
-heard an overhead page for respiratory therapy to go stat to labor and delivery (midnight)
-ran up to find a greyish-looking newborn with no respiratory effort; could not see the vocal cords because of copious fluid in the oral cavity; suctioned, then got the oxygen saturation up with positive-pressure ventilation; father, in tears, invited to bedside to be with his newborn when his condition had stabilized
-collapsed into the call room bed wishing I were in my own and dreading the next beeper sound...
Tomorrow: gotta do it all again...maybe it'll be quieter?
_______________________________________________________
P.S. Thanks to Anali for clue-ing me in to this cute little piece of comic relief.
Posted by T. at 5:23 PM

I'm amazed at how much you do in a day. The thing that really made me cringe above and beyond the rude nurses was the image of the hero (that's you, my dear) eating a left-over ham sandwich! Hope tomorrow is quieter (and includes a better lunch!).

T, I'll just echo Julie. Hope tomorrow is a little quieter for you. Hope you get some rest.

Man. I hope you have a better day tomorrow. I have enormous respect for what you do and I'd just like to say "thanks" on behalf of my professional colleagues.

keepbreathing - I'm the one who is in TOTAL AWE of you RT's!!! You guys totally ROCK, and know SO MUCH about pulmonary physio and ventilator strategies. Thank YOU for being there for those dicey situations when you and your colleagues are totally indispensable.

Julie, Ramona - I so appreciate the well-wishes. I'm hoping statistics & probability are on my side, with calls this close together...! Our little community hospital is usually somewhat less busy at night, but we do have those "black cloud" moments too - with considerably less staffing!

I like the way you had to efficiently use bullets to explain how you work so constantly. hope you find time to go slow. thanks for sharing your day:)

You're welcome T! I hope you get some rest soon! :D

Anali - to think I used to have days like this during residency, AND stay up the whole night doing cases too, for three whole years, every few days...I don't know how I survived!