A Wish for Divining 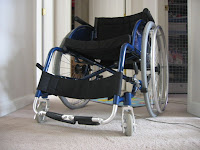 I met a teenage girl who had a devastating familial neurologic disease. She couldn't walk. In fact, she couldn't move any voluntary muscles. She couldn't speak, swallow, wipe away her own drool, protect her airway, or breathe on her own. She was trapped inside her own body but fully aware. This happens to people sometimes, in certain kinds of stroke or trauma, but this poor girl was born to this state of progressive, incurable, unimaginable silent horror. Alive but unable to live. Conscious only of a life-experience filled with sensory input but also the torment of being totally cut off from the world, walled-in, paralyzed.

According to my colleague who gave her anesthesia, her mother had left her and her father after finding out that the condition was genetic, from the father's side.

Her father had been caring for her every need - feedings, tracheal tube changes, diaper changes, wheelchair adjustments, ventilator maintenance - and bringing her to all her medical appointments, until he developed the condition and died.

Now she is cared for by visiting nurses who shuttle her to doctor visits and minor hospital procedures and perform all the tasks for which she had been entirely dependent on her father.

I have a heroic friend (yes, another one!) - she has visited here on occasion: speducatorlvc - who has spent her career courageously and lovingly serving devastated children like this girl. I don't know how she does what she does, but I long to have that kind of open-hearted, brave, unselfish spiritual energy.

The nurse that brought her to one of our hospitals for a tracheal tube change under anesthesia claimed that the girl could communicate with her by telekinetically manipulating a dowsing rod. I wanted it to be true. Doesn't everyone wish for superpowers? Invisibility? Flight? Telepathy or telekinesis? I went to visit the girl and her nurse in the recovery room to learn more, trying to keep an open mind, but knowing that the possibility of there being any observable truth to this assertion was remote at best.

"Her spirit, her energy, fills this whole room," the nurse said, "Whereas yours and mine are much smaller, much closer to our own bodies. She'll move this and make it turn when she means 'yes,' " explained the nurse, holding up an upside-down-L-shaped brass thing, "and makes it stop when she means 'no.' "

She asked the girl a question. The top part of the upside-down L began turning in its little brass dowel. I could see that the nurse's hands were spinning it. She asked another question. The rod stopped.

"See, she says she's not in a lot of pain. Where is it on a scale of one to ten, honey? Ten? Nine? Eight?..." The rod magically came to a halt at 6. I think that's actually a lot of pain. More than I would have expected.

There's a remark in the Wikipedia article about dowsing which states, "Both skeptics of dowsing and many of dowsing's supporters believe that dowsing apparatus have no special powers, but merely amplify small imperceptible movements of the hands arising from the expectations of the dowser. This psychological phenomenon is known as the ideomotor effect. Some supporters agree with this explanation, but maintain that the dowser has a subliminal sensitivity to the environment, perhaps via electroception, magnetoception, or telluric currents."

I asked to hold the dowsing rod. The nurse asked the girl questions. Nothing happened with the rod in my hand. The nurse tried moving it around in relation to me and the girl, then physically moving me around, then holding her hand over my hand as it held the rod, but the rod was silent. Like the girl.

"Come on, honey," the nurse said to the girl. "Let's make a believer out of this doctor. Are you glad the procedure's all done?"

The rod drifted a little, swinging in its brass sheath, but otherwise didn't budge. The sound of the ventilator rhythmically sighing, the other equipment ticking, and the steady beep-beep-beep of her pulse-ox monitor filled the silence among us.

"She's still got some sedation on board," I said to the nurse. "I'm sure she's tired."

"She can move out of her body, you know," the nurse told me. "She visited her last nurse while she was on vacation in Hawaii. Her spirit has power and energy that's way bigger than ours."

I believe if we do have souls, some of the greatest souls on earth, those closest to "the Kingdom of God," are in these catastrophic lives, prisoners in these suffering-ravaged bodies. But as far as I can tell, we're bundles of parts at the mercy of our own cells and chemicals. If we are more than the sum of our frail little parts, I'm going to have to take it on faith. The day I met this girl I didn't know what to believe. What I could see was that there was a lot of pained wishfulness around her, but very little visible good, except perhaps in our wish for her healing.

It was one of saddest stops I've made on PACU rounds. 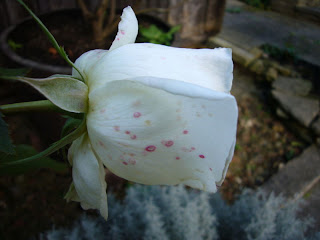 I don't know about this dowsing rod, but I had the experience, some 20 years ago, of a 'real' dowsing rod, a forked branch cut from an apple tree that pulled so hard that it would have hurt my hands not to let it point down towards a gushing spring some 8 feet below ground, and that not more than a couple of hundred feet from where a more scientifically trained 'engineer' had drilled 600 feet and come up practically dry. So who knows?

that was very touching my dear