The Power of Books

Is it just me, or are dads sort of challenging to find birthday presents for? :)

I have a tiny little present here, in the form of a link (Dad, click on the word link) to a fascinating timeline entitled "The History of the Book in the Philippines."

Some highlights that caught my eye:

In 1531, Queen Isabella forbade the transport of secular or fiction books into the Spanish colonies. What, no fiction?! No fun!

In 1583 the Inquisition authorized the Bishop of Manila (or his "people") to inspect arriving ships for books listed in the Index of Forbidden Books, or the Index Librorum Prohibitorum. These would be confiscated. (And then what, I wonder?)

In 1610 the first Tagalog grammar was published. In 1618 and 1622 respectively, the Augustinians and the Jesuits set up printing presses. The Franciscans established one in 1692.

Just for perspective, elsewhere in the world, the King James Bible was published in 1611; the Jamestown Massacre occurred in the New World in 1622; and in 1692, the Salem Witch Trials began in Massachusetts.

I remember how as a child I treasured the books my parents brought back to the Philippines from abroad, and I read them over and over. Good children's books were not so easy to come by in Manila, as I recall, in the early 70's. One of my most vivid memories of our move to the U.S. in 1981 is of how astonished I was to walk into the library at my new school and see shelves from floor to ceiling completely filled with books. I had never seen so many books in my life. Something awoke in me that has never left - a sense of awe over books, a quickening of the pulse whenever I walk into a room full of them, a love of the sensual pleasure of them - the way the pages smell when I first open a book, the feeling of turning those pages, reading words and somehow having those written letters conjure up scenes and lives in my mind, as if from nothing.

With that kindling of a passion for books came a heady infatuation with words, with language and with languages. I felt I could almost taste them in my mouth. Even now, words I like make my mouth feel good, whereas those I don't seem to leave a bad taste in there, or an annoyance in the ear that induces grimacing.

So many memories I cherish of my parents involve literature. Every time I see a full moon shining through wisps of clouds at night I hear my father's voice quoting Noyes: "The moon was a ghostly galleon tossed upon cloudy seas." When I think of T.S. Eliot - especially since I work with patients, if not etherized, anesthetized on the table - I remember my mother opening a beautiful leather-bound volume of his poetry in a musty, second-hand book store and reading to me from Prufrock. And to this day I cannot dog-ear my pages without feeling I have betrayed my beloved grandmother, who taught me to treat books with love and reverence.

If I were to chorerograph a ballet depicting the story of the Garden of Eden, I wouldn't use fruit or sexual license to represent the mythic "Forbidden Fruit." I would have the Serpent character pluck a book off a shelf (or a tree) and hand it to Eve and have her dance around with it for a while before sharing it with Adam.

I can see why people would be afraid of ideas, of learning and thinking for oneself. Insight is powerful; it is power. I know from experience that knowledge and education challenge blind faith.

To that I say an emphatic Amen. 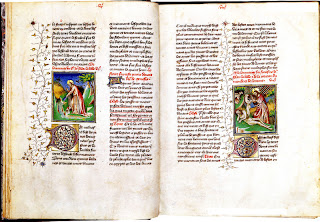 God is not God if God wants unthinking creatures to go around paying thoughtless lip-service. Why forbid the fruit, then? Did the God of Genesis know something about "Adam" and "Eve" that they didn't even realize about themselves - like, perhaps, the fact that they weren't quite ready for the responsibility? Sounds familiar - how many ethical issues has humankind dredged up and been completely ready for?

I think what happens next in the story pretty much demonstrates Adam and Eve's level of readiness, or lack thereof. I believe the "Original Sin" didn't consist of failure to obey a puppeteer god, but rather of self-interest. They grabbed at the Tree's fruit for the wrong reason. They got sucked into listening to external pressures without real knowledge of themselves first, and they wanted the fruit, not as a means to serve their world or honor others, but rather to glorify themselves.

The irony of the Serpent's temptation - You will become like God - is that that's exactly what a loving God would want: human beings so fully realized in their humanity, so spiritually adept, that divinity shines through them. Trust a "snake," though, to miss the point, to not only lack understanding but to completely misunderstand, to fail to realize that knowledge of good and evil - and perhaps, of one's own vulnerability / nakedness - is the only way to make choosing good a valid, freely-made choice.

I do not believe this story, in what many consider the Book of Books, is factual. But I do believe it is true. Because it's a story of me, and him, and her, and you.
Posted by T. at 10:07 PM

First belated Happy Birthday T's Dad! I hope you had a good one!

And I agree about books, there is nothing like the feel of them. As much as I read online, I would never completely get rid of books. I can see eventually storing all my music in digital form, because all I need to do is hear it. Although I would miss the liner notes, but actually I could probably see them online.

Have a good week T!

I sure like the distinction between what is "True" and what is factual. I spent the better part of a post musing about that; you said it in one sentence.