Julie & Julia On My Day Off 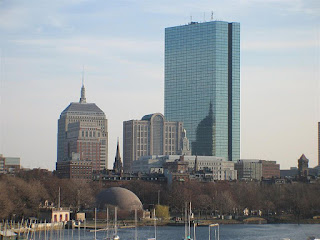 I never get tired of this view of Boston.  Even after living in the area off and on for the last twenty years, I still catch my breath every time the Red Line train emerges from the Kendall Square area and is met by this view while crossing the bridge from the Cambridge side of the Charles River.  When I'm going into town for something enjoyable, like lunch with a great fellow-blogger and friend, seeing this skyline fills me with a special kind of excitement. 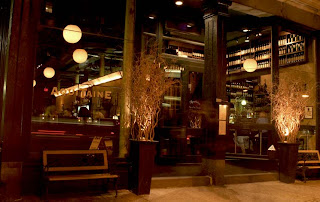 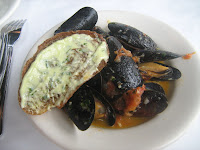 Lisa, a.k.a. Anali, author of Anali's First Amendment, and I took advantage of "Restaurant Week" and had lunch at Aquitaine, a French bistro on Tremont Street.  I'd been looking forward to this lunch since we firmed up our plans last night while I was between cases on call.  I already knew what I wanted:  moules frites, or a "Bourride of Mussels with Leeks, Fennel, Roasted Tomato, and Parsley," served with toasted bread and basil garlic aioli. 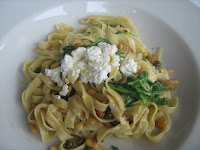 Bourride, I learned, is another occitan word which, according to Merriam-Webster online, refers to "a fish stew similar to bouillabaise that is usually thickened with egg yolks and strongly flavored with garlic."  I detected no egginess in my mussel broth, which had just enough of a hint of garlic to be tasty without being overpowering. 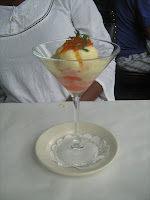 I was not disappointed:  it was exactly what I wanted in an appetizer dish of mussels. For the main course Lisa and I both had tagliatelle with golden raisins, pine nuts, spinach, capers, and hand-pressed ricotta - delicious and al dente, just as it should have been.  Then she had a lovely pink grapefruit sorbet while I finished with a lemon pound cake.
After lunch we caught a matinee showing of Julie & Julia at the the Loews Theater on Boston Common.  I am a huge admirer of Meryl Streep.  I think she is one of the most talented actors out there, and her portrayal of Julia Child is a delight and a tour de force - for me, the whole reason to see this film, beside my great love of food and cooking.  The memorable cooking scenes - Julia practicing her onion mincing and Julie trying to pull off a lobster thermidor - were captivating.  And I loved the husbands in the movie - they were so supportive and so nice, and they reminded me so much of mine. 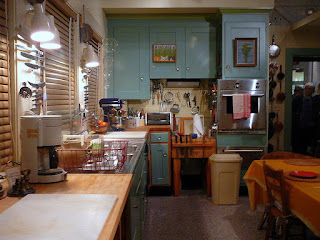 Here's my honest opinion:  while I like Amy Adams' work and enjoyed the film, I found myself wishing it were a film about Julia and Paul rather than Julie and Julia, and perhaps the wonderful Stanley Tucci has something to do with that.  I kept feeling wistful every time the story would cut away from the Childs and go to the Powells, wanting to see more of the love story and events in the lives of the Childs, more of Paris (admittedly a personal bias), more about Julia's culinary journey in France.  The film was very nicely written, and well-acted by all, but Streep and Tucci really had me hooked to Julia and Paul.
I don't own a copy of Mastering the Art of French Cooking, but now I'm thinking, how have I lived till now?!  I'm going to have to check out some French Chef DVDs too...
I tried to think if there's any person I look up to in the way Julie idolized and was inspired by Julia - that one muse you're dying to meet, or to whose home you'd want to make a pilgrimage if you could, or whose every piece of writing you want to read, or whose life and work you'd want to emulate - but no one person fills that role for me so far in quite the same way, though a few might come close.
I appreciate so much better now what Julia Child has meant to the world of food and cooking.  With the support of those who cared about her, as well as her own pluck and exuberance, Julia Child was able to follow her heart, truly be herself, and make an enormous difference. What a great example of using one's greatest passion in life to transform oneself and change the world!
Posted by T. at 8:26 PM

I never met Julia Child but did have the luck to visit her kitchen in Cambridge, in her absence. On several levels, she was la grande dame of cooking in the US, trained in France but totally American in her natural and unpretentious approach to cooking and good food. She never took herself too seriously and always had fun in the kitchen.

I love Julia, and loved the movie. As a food blogger, I have to admit I loved the Julie part as much, and sometimes more, than the Julia part, but then it was probably me just living vicariously through someone else's book deal. Having read the blog during Julie's year of cooking, I felt like I knew her before the movie came out, and I don't think the movie captured her personality or humor wuite right. Probably a generational thing - as funny as she is, Nora Ephron doesn't quite capture the humor of this younger generation.

Hmmm... I feel a blog post coming on. It's about time.

Hey T! Love this post, although I guess I could be a bit biased. I had a great time and I'm so glad that we got to have such a fun day! ; )

Totally agree with you about wanting to see more of Julia and Paul. I am a HUGE Amy Adams fan, but her character was not nearly as charming as Julia (Meryl Streep) came across in the film, and so, like you, I wanted to see more of the Childses. The film worked, though, nonetheless, especially if you're a blogger with a wannabe voice sending notes into the ether!

I loved this movie. I love Julia Childs as well...my daughter loves her even more so. Since I watched the movie, I've also thought about getting her cookbook. :)

I am so disappointed that I had to miss this outing!!! It sounds like you had an incredible time and that food sounds/looks magnificent...yum...I'm jealous...Please let me know when the next outing will be!

I'm so glad Medscape runs Grand Rounds - that's how I discovered your inspiring blog (and TBTAM, too!)
Since you were musing on not being able to come up with someone as inspiring to you as Julia was to Julie, I'd like to offer up my own cultural icon, MFK Fisher. Her essays on food and its preparation are her metaphors for life. They never seem dated to me. Start with The Art of Eating, a collection of essays. I think you will like her writing.
Diane

Diane - thank you very much for stopping by. I read a little MFK Fisher YEARS ago - I'm so glad you reminded me! I must check out her essays. I think you are right about me liking her writing!

I knew if I dug deep enough into your archives I'd find a post about Julia!! I agree with your take on the movie; I kept wishing for more of Julia.

I have found myself a much happier cook (and I use that term VERY loosely) since seeing the film. Hopefully I will also find myself a better actress for watching/studying two more hours of the incredible Dame Streep!