Guest Post: Notes on Copland's Fanfare for the Common Man 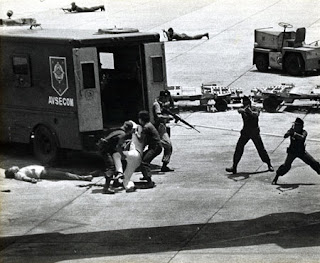 It is my great honor and pleasure to commemorate this Philippine holiday, the 26th anniversary of Ninoy Aquino's assassination, with this reflection by my talented friend Jeffrey E. Salzberg (used by permission; photos added by me):
I had an epiphany some time ago. I listened to Aaron Copland's Fanfare for the Common Man.
I'd heard it before, of course - it's long been one of my favorite pieces of American music, actually - but this time I really listened to it. And, for the first time, I understood it.
It helps to know the background. In 1942, the Cincinnati Orchestra invited 18 composers to submit new pieces expressing their feelings about America. At the time, Nazi Germany had conquered most of Europe. Much of Asia was under the control of Imperial Japan. Mussolini was carving out his own empire in Africa and southern Europe. Freedom and democracy, it's not an overstatement to say, seemed doomed.
Aaron Copland entered the competition.
Tympani - the cannons of war.
...And silence...Evil appears triumphant and unstoppable. 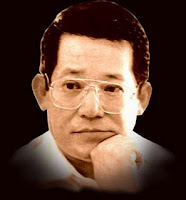 ...But a single horn enters, playing the theme...a single man, who realizes that Evil must be opposed, even though opposition will surely cost him his life.
More cannons. 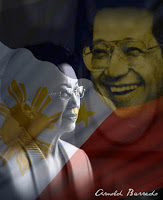 A second person, seeing the first, stands with him. It's still hopeless - what can two people do against such an overwhelming enemy? - but Evil must be opposed; it cannot be allowed to stand.

...But a third person stands...and a fourth...and a fifth. The tide begins to turn.

...And now there's a mighty army, invincible. Evil is vanquished.
...Because one person had the courage to stand against it.
-Jeffrey E. Salzberg, February 6, 2009 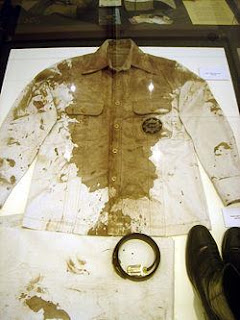 ***
For more about Ninoy, please see my post about him from last January here, a Wikipedia article here, or an online tribute for him here. 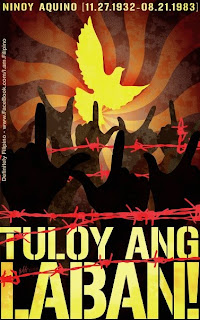