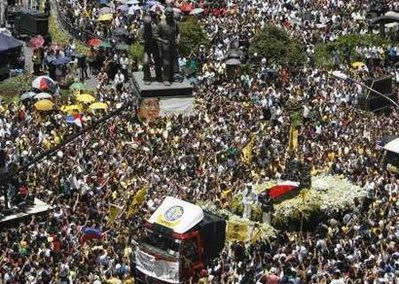 [Photo: Reuters/Romeo Ranoco]
An e-mail from my mother with a first-hand description of events in the Philippines - history from the trenches, as it were:

We spent another day at Cory's wake. She was transferred from LaSalle Greenhills, where she was for two days, to Manila Cathedral. You should have seen the thousands of people who lined the streets all the way from her through EDSA and Makati, to Roxas Blvd and Intramuros. They were wearing yellow shirts, waving yellow flags, carrying yellow balloons, and some holding up huge banners saying, "Maraming Salamat President Cory"* and "Mahal ka namin Cory!"** and "Hindi ka nagiisa, Tita Cory!" The people's spontaneous outpouring of love for Cory gave us goose bumps and was very moving.
The coffin was borne in an open truck and draped with the Philippine flag. The open truck was festooned with yellow flowers and ribbons. There were so many people in the streets that it took the cortege five hours to reach the cathedral from La Salle.
At the cathedral grounds, long lines of people waited to get in to have a glimpse and a chance to say their last goodbye to Cory. I went with C. and B., and this time I took L. too. She had been dying for a chance to pay her respects but was discouraged by the long lines of people standing out and waiting under the bright sun or heavy rains. With us she was able to get in through the entrance reserved for family.
...We stayed for the 8 p.m. mass celebrated by the cardinal, three bishops, and about fifty priests. By the time we got out it was almost 10 p.m. We have one more day today of the wake and 8 p.m. Mass, then tomorrow is the funeral. She will be buried in Manila Memorial beside Ninoy...We don't know how long it will take for the funeral cortege which we will be following to get to Manila Memorial. If the crowds along the way are anything like today it may take us all day. The whole thing is reminiscent of Ninoy's funeral.
Kris came on T.V. and gave a detailed description of her mother's last days. She said before she died Cory was looking upwards with a smile and expressed that she saw Ninoy holding his hand out to her. They urged her to take his hand and go with him.

* "Many thanks, President Cory"
** "We love you, Cory"
***" You're not alone, Aunt Cory"
***
A facebook upload by my daughter on her President's birthday (an application she found called "Obamaize yourself"): 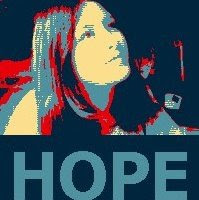 We wish the President of the United States a blessed and peaceful birthday.
***

8/5/09: My daughter and I watched the livestream of the funeral Mass last night and went to bed at around 11:30 p.m., just as the motorcade was getting ready to drive to the cemetery. This morning I checked in on its progress at 6 a.m. and the motorcade had only gotten about 2/3 of the way to the cemetery, because of the crowds of people who had gathered in the streets and around the vehicles to pay their respects. The mood was festive - one of celebration for a meaningful life well-lived. The police have been reporting a crime rate of ZERO. Such is the power of a truly good person to bring people together and make a difference...
***

8/6/09: My parents' vehicle wound up being the lead car in the funeral procession, ahead of the truck bearing Corazon Aquino's remains. For them it was indescribable experience to have tens of thousands of people surrounding, caressing their vehicle and the ones that followed, with cheers and chants in support of Cory. They had never seen so much love expressed for one person on one occasion. People from all walks of life celebrated together in the streets with the unsurpassed joy - joy side by side with the nation's grief - of a people who knew their own dignity, all because of this heroic individual and her martyred husband. Click here and here for on-scene photos and blog posts by Noemi, "A Filipina Mom Blogger" who was there.  These last two pictures are from her blog.
8/22/09:  attended a Mass in honor of Ninoy and Cory at St. Ignatius at Boston College, our current parish and the parish closest to the Aquinos' former home on Commonwealth Ave. in Newton, MA.  Beautiful songs in both English (I Am the Bread of Life by Toolan and Blest Are They by Haas) and Tagalog (Bayan Ko and a tribute by a rondalla in native dress).  I got a little homesick.
Posted by T. at 5:16 PM

Thanks for the reminder; she was a good woman (I still remember her yellow suits). Democracy is not an easy thing, especially when it's a young one, and the basest of man's nature is still able to sway the governance of a nascent nation.

I wish for our president a friendly birthday reminder that our country was not founded on "big gobment" but a small (enumerated) government that got out of the way to allow for big dreams and big efforts and the sweat of one's brow to execute those inspired plans and dreams into a business of any size or a profession to contribute to our God blessed nation.