Patient: "One Who Suffers" 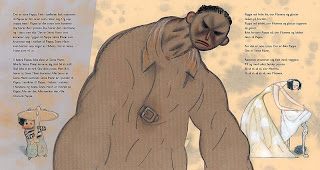 [Picture source.]
We all have patients sometimes with whom we absolutely dread interacting.
We had one such patient recently - a sullen, angry, hate-filled man who acknowledged others only rarely and, if he did deign to respond to inquiries at all, did so with unabashed hostility.
Imagine my delight when I was informed that five or six people had attempted to get an I.V. into this gentleman without success while I was in the operating room taking care of another patient. By the time I came out no one wanted to go near the man, or speak to him, much less try again.
When I approached the patient and introduced myself he didn't look at me or reply.  He ignored every question I asked.  When the first I.V. cannula I inserted entered the vein but then refused to advance further, he swore and threatened to leave.  I couldn't blame him; he had been made into a pincushion by several others, after all, and now by me too.  I finally managed to get the I.V. on the third attempt and was able to bring him to the operating room.
All the while despite his unpleasant manner and occasional sniping comments I made a special effort to speak with calm and respect, to touch gently, to be attentive to his comfort.  It wasn't so easy.  Gradually his manner softened a little.  As I was applying the last of my monitors I told him I would be giving him the anesthetic soon.
"Can you..." he began.
"Can I what?" I replied, trying to encourage him to ask what was on his mind.
"You could make it so I don't wake up, couldn't you?"
"I could, but my job's to make sure you do wake up."
"No, please, I don't want to."
All of a sudden he sounded scared, and very, very sad.  Not at all the hard, furious man from the preop area.
"Please don't wake me up. Just let me die."
"I can't do that."
"No one would ever have to know.  Please just kill me.  Please.  I know you can."
"But I can't.  It's not up to me," I said.
"But I don't want to wake up.  Please."
All the layers of anger and hate he had put on over his hurt and fear had lifted like veils.  When I saw his face, his true face, all I could see was suffering profound enough to make his life unbearable to him, and my own negative feelings melted away. I felt unkind for having resented his earlier demeanor so, and clueless for not having remembered that hostility almost always conceals some kind of fear or pain.
"All I can do is give you a brief rest," I said.  "That I can give you."
The disappointment in his sigh cut deeply.
We still have so much to learn from you, I thought as the anesthetic took hold.  So much to learn.
Sometimes the ones we think we don't want to take care of are the ones who teach and take care of us.
Posted by T. at 3:20 PM

What a beautiful post. I'm always surprised at the significance put on empathy in the realm of anesthesiology, and, indeed, the way that patients will respond. You sound like a wonderful doctor.

Just out of curiosity, is there a certain point when one decides to switch to a mask induction in lieu of an induction using intravenous agents?

What an encounter -- now you're teaching your reader because of it.

Why do you think he was so depondent? Pain? Was he DNR? I am curious about his circumstances and why he would be going in for surgery to fix something when he wanted to die.

Anon 2:40 - Thank you for your kind words. In general I don't switch from one method of induction to the other; I decide either to do an intravenous induction OR a mask induction, and more commonly the former unless something in the patient's history that suggests the latter would be preferable.

Michael - thanks! I'm still processing this though it occurred a while back. Still learning, still trying to comprehend.

Fordo - I don't feel at liberty to go into the details of this particular patient's situation, but I will say in general that lots of patients do come to the operating room for a variety of reasons despite some of the circumstances you mention (death wish, DNR, terminal illness, etc.). We see it all the time. What we don't always get an inside view of the degree of emotional suffering our patients are going through, so when the curtain is lifted even for a moment, the experience can (and should) stay with us for a long time.

Beautiful post T. I understand your feelings. Looking outside the box of human emotions can really bring understanding and helps us to bring some comfort to people when many others just don't understand. It's amazing how much we can learn when we choose to tune out what might be our automatic reactions to certain situations.

Wow. You certainly handled a bad situation with grace and compassion. I'm not sure if I would have had the amount of patience and sympathy you showed this patient. It was difficult to read about such a troubled soul.

One of the things they don't teach is that depression often makes the person who has it unpleasant or difficult to deal with. Then other people act negatively towards them, and the downward spiral continues.

It surprises me how often people at the hospital fail to realize that. I'm glad you did.

Did he at least get a psych consult?

The picture is from a very good Norwegian children's book called "Sinna Mann" (Angry Man), about a boy (called Boj) living with a wife-beating father.

The three characters can be seen in the picture. The Norwegian text around them describes the father getting angry. Here's some of it:

I thought that once a person is intubated it is not legal to remove the tube without a court order... this assuming that the patient is not conscious and did not leave clear, legal instructions about end of life choices.

OMDG - care for patients like these is always stepwise and complicated. He got the best care he could that day.

Oystein - I thought you might know about that illustration!

rgk - I think end-of-life laws vary by state. When I was in New York a palliative care specialist told me physicians had a lot of latitude to make treatment judgments. If you're interested in the convoluted Massachusetts situation, there's a blog post here that explores it a bit: http://urbanparamedic.blogspot.com/2007/12/confusing-mess-that-is-dnr.html