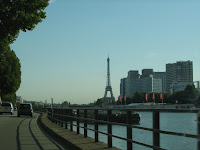 We drove into Paris this morning in glorious weather. It's so interesting to think the Eiffel Tower was so controversial when it was being constructed, with people complaining it was an eye-sore. Now it's iconic, and I have to say, the sight of it from the quai as we entered the city still took my breath away.

We dropped off our things at my in-laws' apartment in the 15th arrondissement, then walked to the tower with 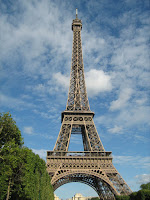 our kids, my brother-in-law & his kids, & his girlfriend. I already have many lovely memories associated with the Eiffel Tower. I remember pushing my son's stroller here when he was 6 months old and sharing a crêpe with him. Now he's almost 7 and saying things like "Are these (the Eiffel Tower stairs) made of titanium?" and, from up at the top of the tower, "The people walking look like molecules."

I can't help but think of decades of visitors from all over the world in this place. Paris has been international for hundreds of years. Even Filipinos, faraway as they are, came in the 19th century; Jose Rizal, for example, studied at the University of Paris before he went to Heidelberg. Perhaps he saw the tower during its contruction? 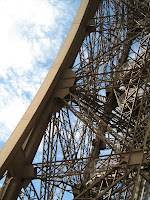 This might sound geeky but every time I look at the metalwork I think of the trabeculae of the femur, sketched by anatomist Hermann von Meyer, which inspired Gustav Eiffel's design for the tower and advanced in engineering the concept of building along lines of force. 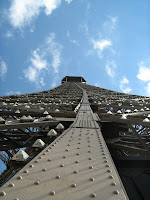 master protocol when I get back - a Chartres setting, and a Tour Eiffel setting! There are 329 steps to the first level, at 187 ft (57m), and another 341 to the second, which is at 377 ft (115m). I have to admit I got a little bit vagal (intense wave of nausea) looking up toward the top (but weirdly, not looking down). With tiny clouds passing so quickly overhead and us looking up at the top of the tower from the second level, the tower seemed to be swaying toward us, adding to my queasiness, but it was an optical illusion; in reality the construction is so solid, according to my little Dorling Kindersley guidebook (Top 10 Paris), that it doesn't sway more than 2.5 inches (7cm).

The tower is 1050 ft (320m) tall, but the highest overlook is at a still-dizzying 877 ft (274m). The view of Paris from up there is amazing on a clear day. We could see the Louvre, Notre Dame, the Sacre Coeur in Montmartre. We're hoping to visit the latter tomorrow.

This afternoon we walked along the Quai de la Tournelle and Quai Saint-Michel, sans enfants, to visit the bouqinistes and take in the beautiful view of the cathedral of Notre-Dame. My husband and I try to do this every time we come back to Paris. 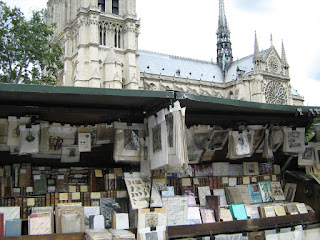 I love the Quai de la Tournelle. Where else can you find a cello shop next to a shop of antique toy soldiers? A little further down the quai we swung by Shakespeare and Co., an English language book store which has to be my favorite in Paris. 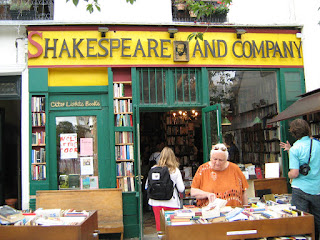 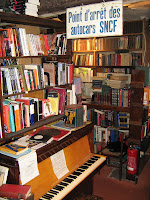 It has so much character, with books floor to ceiling on two stories, and an occasional object of interest tucked between the shelves now and again, like an upright piano. I can understand why this book store has been a gathering place for writers / Paris literati. Upstairs, in fact, a writers' workshop was in progress, down a tiny corridor off which there were also small areas containing books piled high in no particular order. What a dream, to enjoy a workshop like that in this place, in this city!
Tonight we dine on a friend's boat on the Seine. I think that will have to be a post unto itself.
Posted by T. at 8:04 AM