Tough I.V. (Or, Taking Life One Little Spiritual Lapse At a Time) 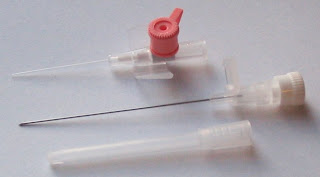 Let me preface this confession of sin by declaring that I usually get along with nurses. If they're especially good I try to remember to let them know and thank them profusely. I also encourage them to speak up if I'm missing something, or am acting funny (usually unintentionally), or am just way off in any way. They know I'll listen, ask good questions, listen some more, and really work to make our care of the patient the best care it can be.
Usually when a nurse "writes you up," it's because you've blown it, big time, either medically or behaviorally, so when my boss said a nurse took the trouble to write me up, I was floored - until he showed me that one of our most seasoned recovery room nurses had written him a letter praising my work and integrity as a physician. Then I was floored all over again.
The point is, my relationship with nurses is almost always positive and collegial. We get along.
A notable exception is my tension with a woman I will call Ms. Rudy, because she's rude and has an attitude problem and places her own frustrations above patient care as a priority, which to me is never acceptable. Insult me to my face if you must, I really don't care, but never, EVER put your own bitterness above my patient. I won't discuss Ms. Rudy today; I'm too tired.
But one other exception got under my skin just a bit today. Looking back I realize the incident probably wasn't a big deal on the surface, but the unspoken text made it bigger in my mind. I consider it a spiritual failing that I got as irritated as I did, but there it is. I confess. I'm not always as good as I want to be. I need to get it off my chest. I'm still a little annoyed.
At one of the community hospitals served by my anesthesia group there is an outspoken nurse not named Phil, but I will call him that here. Phil appears to think a great deal of his own knowlege and skill. This in itself usually rubs me the wrong way already, in anyone, but in Phil it is particularly off-putting because of his lack of good listening skills in the O.R. and because of the tone in which he makes suggestions. There are nurses who have a great deal of knowledge and experience and have laudable communication skills. When these nurses make suggestions, I ALWAYS appreciate their input - it can save my patient's life. But somehow most of them realize and acknowledge my own knowledge and experience as they point out things. For example, they'll say, "Have you tried vagal maneuvers already?" instead of saying in a sarcastic tone, as Phil might, "Um, shouldn't you be doing vagal maneuvers?" Perhaps the difference is subtle, but it's enough to irritate me.
One time Phil observed me having difficulty inserting a device called a laryngeal mask airway, or LMA, into someone's mouth. I tried once the conventional way; it wouldn't go. I tried changing the amount of air pressure in the LMA and approaching from the side a bit, and it still wouldn't go. At this point Phil said in a sing-songy voice something like, "When something's not working, it's time to go to plan B," which I ignored because I had one more option up my sleeve that I wanted to try. I inserted the LMA upside-down and righted it just before it reached its final position, and the seal was perfect. "Oh..." Phil muttered, "I've never seen that before..." Well, dear, you haven't spent years TRAINING in an anesthesia residency before, so if you're not going to be helpful, why don't you just leave me alone?!
Phil prides himself on being the (self-proclaimed) King of IV's at this hospital. If there's a difficult IV, Phil will be asked to place it. He is extremely good at it, and he makes sure to announce that frequently. He will also announce any time he has to leave the room or delay a particular task because he is needed to help with a tough IV. His expertise is undisputed. He will not use an ordinary rubber tourniquet but instead uses a blood pressure cuff with a pressure meter on it to make veins more visible, heightening the mystique of a procedure most medical students learn to do before the end of their first clinical year. For Phil the sacred IV is a thing of ritual, drama, and much fanfare. Everybody stand back, please, and watch the master at work.
Today he came to me saying that my next patient was fairly heavy-set and had severe psoriasis all over her arms and legs. He said he didn't think he could get a 20-gauge (medium) IV in her and wanted my "permission" (his word choice) to try a 22-gauge (pediatric / small) instead. I asked if he had checked feet and ankles. He said no. I said I wanted a look for myself first.
Phil said, "It's just a cysto."

Excuse me, what was that? "Just" a cysto?

That was when the irritation started to bubble. Actually, I felt really angry for a moment.

Anyone who thinks of a surgical procedure, even a so-called minor one, as "just" this or that is one of three things: a) uneducated/ignorant b) stupid c) indifferent. None of these is a good thing. I will not allow someone to reason with me that we can cut corners because something is "just" a small procedure. There are no small procedures. Someone can code and die during tooth extraction, and has. I don't want to hear "just," not with my patients.

As Phil entered the preop area with me following, the nurse who had asked him to place the IV asked, before she caught sight of me, "Did she say yes?" She saw me just as Phil was shaking his head. He repeated again to that other nurse, "It's just a cysto," as if to say, "I don't know why she's not agreeing to it."

I introduced myself to our patient, sympathized with her over her skin lesions and small veins, and explained that I wanted to have a look. She was a sweetheart about it. I placed the tourniquet around her left arm and asked Phil as encouragingly as I could, "How about this? Would you like to try this spot? Maybe further down, too..."
He said, "Well, feel free to go for it if you think you see something. I can't really see what your seeing."
I swabbed her arm with alcohol in a couple of spots and injected some local. He handed me a 20-gauge IV and got a second one ready for when I missed my attempt.
Anyone wanna guess what happened next?
IV went in, smooth as silk. The lovely woman said she didn't experience any pain during the placement.
Perhaps it is yet another spiritual failing that I actually expected Phil to thank me afterward and was suprised when he barely spoke to me for the rest of the day. I know, I know - we're not supposed to do acts of service for thanks or reward, and we're not supposed to get so annoyed with people, and we're not supposed to do all sorts of things that I fall into the trap of doing, at least in the privacy of my own mind (which doesn't lessen the fault).
Mea culpa, mea culpa, mea maxima culpa. I'll work on it.
Posted by T. at 10:01 PM

If you have spiritual lapses, then what I get is mammoth blackouts. I'd have probably hit the bloke over the head, which is why I'm not in a service profession.

Lee, that is SO funny! I laughed out loud.

It helps a lot, this laughing at myself...Thank you!

Will that long, sharp, needle-like instrument puncture overblown egos? I would judge your culpa rather minima under the circumstances.

Time for a little differential diagnosis; is he a bully by nature, or simply a guy with self esteem problems severe enough to merit a DSM-IV code as characterologically impaired? It makes a difference on how you field that ball. If the former, continued boundary setting is most appropriate. if the latter, then his ego is a chain you can pull to get productive outcomes; you can "own him" as it were by requesting that he go after "tough sticks" for you, and congratulating him on his ability. One of the weaknesses of those requiring ego-stroking is that they fall prey to those willing to do so, since their ego-requirements demand it Remember, if he is irritating you, he is irritating most everybody. You are not in competition with him. You've won anyway as soon as you decline to compete, and become the judge of his ability. Stroke his ego-he's yours (if he's not just a bully.) Since I have a sense of your personality, I am guessing you will feel uneasy, like it's being manipulative-which of course, it is. All therapeutic interventions are manipulative...just approach it with a healing heart. And it's a leadership thing; (you ARE a leader, after all.)

You felt threatened by Nurses?

You need to do something else my dear.

What I did feel was extremely displeased at his shoddy approach to patient care. I am always bothered by this when it comes from any person on my team; our patients should come first, not our egos, and I felt this nurse was doing the opposite.

P.S. After years of confronting life-threatening situations in the O.R. as well as asinine behavior, I have yet to be accused of outwardly losing my cool. To do so would be counterproductive to the job I regard so highly.