Just a Quick'un About Home Cookin'

We're all feeling a little alien back on American soil. My little girl said wistfully, "Everything seems smaller..." She explained that she was thinking of the Gothic cathedrals of France. My reaction was everything seemed so unbelievable new. No trace of the 13th century here. I found everything so modern and loud and crowded together, and all you could see and hear was the same language. The Red Sox announcer on the radio sounded so...AMERICAN. We're all still thinking in French; some of our word-choices in English are clearly not the first-choice English words but rather translations of the words a French person would use to express the idea. Weird! I haven't felt the need to adjust to any U.S. locale like this in a long time.

I tried to comfort my daughter's sense of yearning for France by telling her that her own country had treasures of its own - the Grand Canyon, Big Sky country, the Pacific Northwest - and that someday we would see them together. But it must have sounded a little half-hearted to her: I left a big piece of my heart behind across the Atlantic too. I was starting to feel at-home there.

No more baguettes from the neighborhood baker for breakfast, or 2% milk that tastes like cream. No more being surrounded by the most beautiful language in the world. No more village life or ancient historic sites. But now that we're home, we can turn on television channels that are actually broadcasting something worth watching, or find store that's open for 24 hours on a Sunday, or go to our local diner and grab breakfast for dinner, which we did tonight just for fun. Tomorrow it's back to work, back to our regular lives. Strangely my usual Sunday Night Syndrome is quiet. I think it has jet lag. 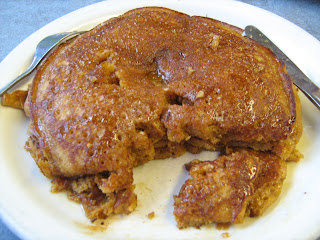