I haven't entirely abandoned my trusty little oboe. I'm so glad it's so portable! There was plenty of room in my carry-on bag for other stuff next to my little oboe case. I wish I could have taken a picture of the security guy's face when he paused the conveyor belt to scrutinize the x-ray image of my hand luggage inside the machine. His eyes got more and more scrunched up and finally he put his hand over his brow, leaned on the screen, and looked at my bag intently. I wanted to speak up and say it was just an oboe, but I thought better of it.

I've realized that I love a lot of things whose origin is (as far as I know) French. Crêpes, croissants, and opera gateau. Ballet. Oboes. The French language. Lots of great saints. Gothic cathedrals. My husband. Maybe I had a past life in France or something! :) 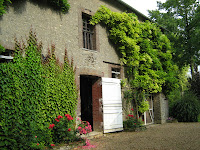 Practiced in our cozy country home with the windows open and a breeze blowing in from the fields, while my kids and their cousins were clomping up and down the wooden stairs and raucously practicing a play my daughter had written, partly in French. It was a brief practice session, especially because I really don't feel comfortable playing when other people are around. 'Twas in the Moon of Wintertime (a.k.a. the Huron Carol), in honor of René and his fellow-Jesuit missionaries. The opening passage of Swan Lake. Scales. Gabriel's Oboe. Some exercises from the method book. They are getting easier, but it's tought to practice consistently on vacation!

We're off to Paris tomorrow for a couple of days. Not sure if I'll be able to keep writing, but I have no doubt I'll be hungering to catch up either from there or when we get back. If anyone has suggestions for where we should go to eat, let me know!
Posted by T. at 10:59 AM

I enjoyed these beautiful photos. I've always wanted to go to France. Ironically, I play the oboe and just started my anesthesia residency. Enjoy the rest of your vacation!

Kate, thanks so much for stopping by! Please feel free to drop me a line if you have any questions at all about anesthesia residency, boards, etc. I may have some oboe questions for you at some point, too! Best of luck!

I'm really enjoying this journey with you.

Where to eat? Anywhere except places recommended by doormen or concierges at hotels. They have their own (usually wrong) view of what Americans would like.

Instead, find little out-of-the way places that are filled with local folks.

Thanks, Lee, for being with me in spirit! And Paul Levy, it's an honor to have your wise advice - the "hidden gems" are definitely worth a little extra leg-work off the usual paths! Thanks for coming by.