How "Pinoy" Are You? (Or, Confessions of a Stinky-Food Gourmande)

Perhaps you're a single (or for that matter, married) male in your thirties and you still live at home with Mumsy. Or maybe you greet your friends with your eyebrows, or have a cutesy, infantile nickname that bears no resemblance to your real name (like, "Cherry Pie," or "Bong," or what "T." stands for - and if you're not one of the ones who knows already, don't even bother asking). Perhaps you come from a country littered with signs like, "Second Floor Upstairs," or "Drop Your Pants Here" (at a dry cleaner's - we sort of have a preposition problem). Do you pronounce f's as p's and vice versa, or v's as b's? Do you "open" and "close" the light? Do you make (or worse, laugh at) corny jokes? Do you season your spaghetti sauce with sugar, eat rice at every meal (yup, breakfast too), 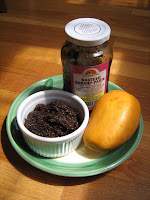 and eat every meal with a spoon?

Even if you do, you may only be "mostly" pinoy. The acid test is this: do you like bagoong? (Pronounced "buh-GONG" or "buh-guh-ONG.")

I do. I love it. It's YUMMY. And it stinks to high heaven.

Our native shrimp paste has a DELECTABLE stink that has been compared to asafoetida, or la merde du diable - Devil's Dung. I would almost say there's nothing like it in the world, but of course, that's not true. There are plenty of versions of it - mam tom in Vietnam, kapi in Thailand, belacan in Malaysia, and terasi in Indonesia. I don't even want to know how it's made. I'm sure it's scary. They take

some tiny shrimp or fish and ferment it in some kind of jar. All I want to know is what time is meriyenda (mid-afternoon meal, between lunch and dinner, from the Spanish "merienda"), and do we have some green mangoes to go with the bagoong? (Here in the U.S., I've found that ripe ones will do just fine, too.)

If you're like my whiter-than-white husband, the minute you detect it wafting from the kitchen, in all its divinely malodorous glory, you groan and exclaim, "Aw, MAN! That stuff is NASTY!" Out of love for him I don't consume it while he's around, but guess what? He's away for the weekend, and I'm on-call from home today, and there's a bottle of it in my fridge just waiting for me to slice open my last Champagne mango, the only variety I've found at Whole Foods Market that even resembles the perfect, sweet, succulent, incomparable Philippine mango.

As British journalist Matthew Sutherland informs in his witty article A Matter of Taste, most non-Filipinos should probably avoid "the ubiquitous, stinky shrimp paste, BAGOONG, and it's equally stinky sister, PATIS. Filipinos are so addicted to these latter items that they will even risk arrest or deportation trying to smuggle them into countries like Australia and the USA, which wisely ban the importation of items you can smell from more than 100 paces."

One of our native eats did make it onto Fear Factor - balut, or fertilized duck egg. My husband tried to try one of these at a banquet in Manila once but just couldn't do it. I can't do it either - maybe I'm not so pinay after all.

But at the end of this very formal banquet, I had the chance to show some of the native still in me. He didn't believe me at first when I said, "It's about time for the servers to start bringing out the tin foil so we can wrap up what's left of the buffet." (Or, as we say, "make balot" - same root as the duck egg thing, in which egg parts and duck embryo parts are "wrapped" around one another.)

Sure enough, minutes later they came out with the tin foil and the plastic bags.

"See?" I said. "Filipinos hate to waste food. Plus, it's rude to the hosts not to want to carry some of their food home." 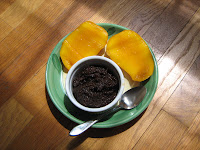 "The country club has a chef, and the chef will take it personally."

Food and relationships, the stories people tell - they say so much about a culture. I think my food right now is smiling at me (see Dr. Deb's post on pareidolia) and encouraging me to dig in.
Posted by T. at 12:26 PM