pediatric internship, I had finally managed to lie down and doze for about an hour, probably less, when my infernal beeper went off. Again. What was it this time? Another IV that had fallen out of an infant's gauze-covered hand? An order written by someone else mistakenly attributed to me? Yet another admission for an already-crowded ward?
I fumbled for the beeper and glanced at the neon-red numbers on the digital clock in the call room. 4:57. Nausea rose inside my chest, sickening, like swells of filthy water lapping against a dock.
I dialed the extension, and a nurse at the main desk answered. "You have to pronounce Jones*."
"What?" I heard her words like someone who was just beginning to piece the English language together. "What do I have to do?"
"Jones died. You have to pronounce him."
"Oh..." The impact of sudden clarity was like a splash of cold water on my sleep-deprived face. The little two-year-old in 301. The smoke-inhalation victim, who had been discharged from the ICU to our floor to die, because that was all we could expect, was dead.
That particular hospital allowed me fleeting passage into the outskirts of human experiences that no one would want for themselves. It had a large population of pediatric cancer patients and a fair number of child abuse victims in addition to the other medical conditions that send kids into hospitals. Many of those conditions involved tragic accidents, like this one.
I stepped out of the cramped, smelly call room into the fluorescent lights of the pediatric floor and made my way to the desk. I was tired, filthy, and feeling ill. I didn't want to see this child. I didn't even know what the ritual consisted of, this declaration of death. Feeling like the new kid lost in grammar school, I had to ask.
What an arrogant thing, to think we have the right to name the moment when a person's life is no more, when some of the person's cells are still living, when we don't even fully understand what life is and how it arises...But I knew it was nothing so dramatic as arrogance, really. Practically speaking, the county needed a date and time on a piece of paper. That was all.
I entered the room, and little Jonesy lay on the bed looking like a sleeping child, totally peaceful. Like my son at the time, he was two, a thin boy with skin like light coffee and glints of gold on his thick curls. His favorite stuffed animal, a sheep or small cow of some kind, lay in his arms. His mother was curled up beside him, holding him. She had left him with a babysitter when their home caught fire.
I mumbled something apologetic and outrageously inadequate, then placed my stethoscope on his chest. With children you get used to hearing a very fast and vigorous beat. The hollow nothingness that met my listening ears was a disorienting shock. It was so wrong. And frightening.
I remember only vaguely what else happened. The attending pediatrician on-call came in from home to speak to the mother. The nurse at the desk saw tears in my eyes and commented, "Oh, is this your first one? You'll get used to it." I filled out some paper work.
I have been present at the very beginnings of life as well as at life's end. I have not yet tired of the anticipation and joy of those beginnings, or grown "used" to the mystery and sorrow of the end.

***
Today I placed a thoracic epidural in a 100-pound, 90-year-old man with a mass in his colon. I guided a paramedic student as she placed the breathing tube just before his surgery. Upstairs, a laboring mother waited as her body prepared to bring her firstborn into the world. I gave her an epidural too, just another day on the job...but never meaningless work. My 90-year-old gentleman was wheeled to his room just a few moments ago. Today was not his day to depart.
I am on-call this weekend and feeling a little lonely, as I often do on such weekends. I call my 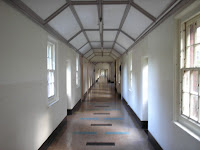 children, who are on their way to Vermont with their father. Their bright voices cheer me. My husband and I are both tired, but we still have enough energy for words of affection and support. I watch again, with a mother's obsessive wonder, the videos on my computer of my daughter singing the song "Maybe" from Annie and "Anything You Can Do" from Annie Get Your Gun. It's time for me to grab a simple bite to eat before the beeper goes off again, with another seemingly mundane task that cracks my life open just a bit, letting it wend and weave its way out to brush against someone else's seemingly ordinary life, for just a moment. And so I go.
_____________________________________________________
*Name changed.
Posted by T. at 6:49 PM

Your article is a very moving and very personal account of trying to cope with an extreme situation. A high degree of compassion often leads to feelings of helplessness in the cold light of the unavoidable.

This is, indeed, a very touching exposé and extremely well written. Thank you for your unabashed candor.

For a different take on the topic of death and dying, and of how to reconcile loss, please see A letter.

I have bookmarked your blog and will monitor your postings with great interest.

Hey, that nurse was wrong. I attended PICU and adult ICU for years. You never get used to it. Never ever.

I'm glad to hear that you don't get used to someone's death and the words of MK too. I think when death becomes unemotional and routine then some of the compassion is gone. A doctor or nurse or any caregiver without compassion is very scary to me.

Some get used to it, I suppose, and some don't. I wonder what makes the difference.

Speaking as an often numb human being, I'm glad you haven't.