Ether, Anyone? (And other Paris thoughts that didn't fit into a coherent blog post) 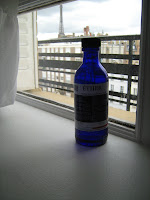 I haven't forgotten about anesthesia entirely, and finding ETHER in the medicine cabinet certainly brought its memory back with a jolt! I know it's used in many countries as a disinfectant; in fact, I grew up on its scent, which greeted all visitors to the hospital in which my mom had her office. But it's still jarring for an anesthesiologist to find a bottle of anesthetic in the bathroom! 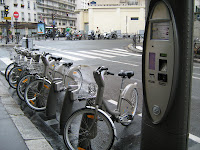 The mayor in Paris has made efforts to create a "cleaner and greener" Paris, and I applaud them. An example is the implementation of public rental bikes all across the city - drop a coin in the machine, take a bike, return it to a bike station near your destination, and voilà - fewer emissions, though motorists have grumbled about the increased volume of bicyclists in the city. Another thing we could learn from the French is how to do the groceries. It's BYOB, bring your own bag, over here - much less wasting of plastic bags. 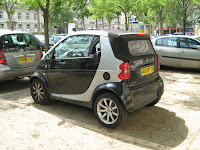 I couldn't leave the country without taking a shot of an adorable pot de yaourt - those cute, little 2-person cars they have here that look like you could almost put them in your pocket. 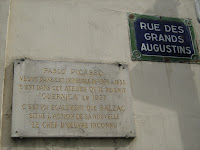 This plaque about Picasso painting Guernica in this building on the rue des Grands Augustins reminded me of the ghosts of great artists that haunt this city. Just a stone's throw from here Gertrude Stein held her salon, as I recall. I was astounded to be reminded by the interesting book Literary Paris just how demonic some of the greatest artists were. Baudelaire was a complete misanthrope, and Rimbaud was about as horrible and piggish (in public) as could be. 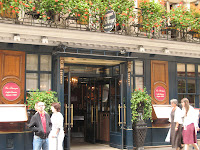 My brother-in-law and his girlfriend had a chance to dine at Le Procope, hang-out of so many famous Paris writers, philosophers, intellectuals, etc., and the oldest restaurant in the city, having opened its doors in 1686. Says its website: "Voltaire, Rousseau and Diderot were loyal regulars and the Encyclopaedia was born under the crystal centre-lights of the Procope. During the revolution, Danton, Marat could all be found here. Benjamin Franklin even fine-tuned the American constitution here." 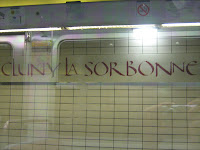 I noticed at the metro stop for the Sorbonne that instead of having the usual sign with the usual lettering, theirs had to be special. :)

Finally, there's the Paris no one talks about. When we were going through the Écluse de l'Arsenal in Eric Vincent's boat, we saw someone's tent set up against the wall there, out of most people's sight. I also walked by a squatter at the Cambronne metro on my last morning who, unlike the tent-dweller, made a public display of his plight. Paris isn't paradise for everyone. 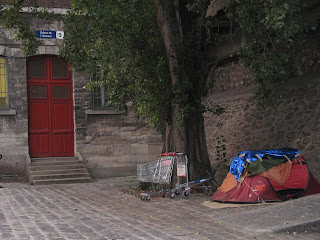 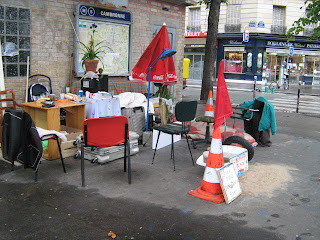 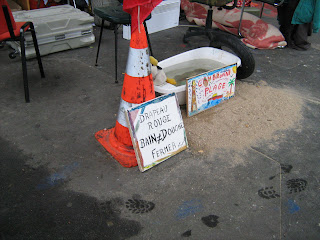 I'm really enjoying vacationing with you! (This is probably the only way this oboist will ever get to Europe!)

Btw, we have used our own bags to grocery shop for over 10 ... probably over 20 years. Maybe California is just ahead of the times? ;-)

Will you be hearing any concerts? Have you seen a lot of buskers? (I hear there are a great number there.)

Patty, you're definitely environmentally ahead of us...We need to do a better job!

There have been buskers at every turn here, and there are plenty of concerts in various settings around the city during the summer, but I wasn't able to attend. :( Bach Cello Suites were playing at St. Ephrem's the same night we went on our sunset cruise on the Seine, which we couldn't pass up!

Maybe next time...if I get lucky I might find an oboe concert in some medieval church in this country some time - I saw some advertised on the French oboe society website!

... and wouldn't it be great fun to visit oboe makers in France? Loree? Buffet? Marigaux? ... more? I'm guessing they allow visitors, although having not been to France what do I know?

I think California tends to be ahead when it comes to things like environmental issues. Of course we are also pretty darn wacky! ;-)