The Mystery of Joan of Arc; Rouen; and Louviers 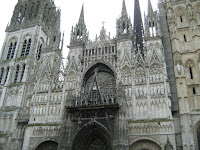 On our way to Rouen yesterday (yet more toll collectors resembling fashion models - what is up with that? It's nationwide!) my husband and I were trying to see how many French saints we could name. There are a lot of them! A few we came up with were Bernadette, Thérèse, René Goupil, Isaac Jogues, John Vianney (the Curé d'Ars), Louise de Marillac, King Louis, Jane de Chantal, Francis de Sales...and of course, Joan of Arc.
I have always felt ambivalent about Joan of Arc. From a medical standpoint someone who hears voices commanding her to do things sounds pretty undeniably psychotic. She had visual manifestations as well, however, which as far as I remember from my remote psychiatry rotation in medical school are not quite as common as auditory hallucinations in states of psychosis. Also, the transcript of her infamous trial reveals fairly organized thinking and speech on her part, a strong internal logic to her statements, and a tone of conviction to her defense statements, which suggest considerable lucidity and soundness of intellect.
In any case, a psychiatric condition wouldn't preclude holiness. Sainthood is not a legal case: mental competence is not necessarily a requirement for sanctity, nor is mental "incompetence" a disqualification. I actually have more trouble accepting her warmongering, though of course in the context of her own times, it may have been seen as necessary, even inevitable. If she was open to Spirit, on fire with trust in God and willing to respond to God's call, and full of living hope, she could probably be considered holier than most...but people who believe in so-called "holy war" might also be described in these terms, and I wouldn't consider such people vessels of God's love at all. I don't know. But that's okay. 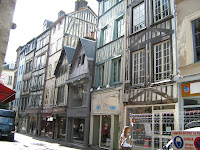 Rouen is a large city with an exquisitely charming older portion, whose storefronts still show the traditional Normandy exposed beams of centuries past, and whose cobbled pedestrian streets are reminiscent of illustrations in story books about medieval times. Good thing we were able to see the cathedral for miles - we had to navigate our way into town sans map, as usual.
We visited the cathedral, of course, to see the subject of Monet's well-known work. It's quite run-down and in terrible need of 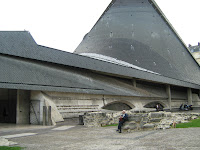 cleaning. The surprise find for us yesterday morning was the Église Sainte-Jeanne-d'Arc in the old market square where Joan was burned at the stake. Designed by architect Louis Arretche in the 1970's, it resembles an enormous fish. It's supposed to recall Normandy churches made to resemble upturned boats. At first it struck us as a modern monstrosity in the middle of the old marketplace, but as we walked across the square we grew more and more impressed with its unique design. It's brilliant. On 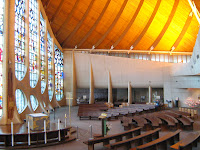 the other side of it, some attached buildings by the same architect look like smaller fish, so that from that side of the square I felt like we were looking at a small school of fish next to a gigantic one, or a small company of boats. The interior made us draw our breath in in surprise and admiration. It is beautiful, with its wall of stained glass salvaged from the church that had been on this spot but destroyed during World War II, and its curved ceilings. What an interesting piece of architecture. 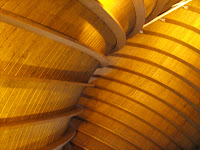 Outside a patch of flowers marks the spot where Joan was executed, and next to it, one can still see the ruins of a medieval stone wall built to protect spectators from the fire. How morbid. I'll never understand how people can watch or place someone in a state of agony. Burning someone at the stake says to the condemned not only, "You don't deserve to live," but also, "You deserve to die as horribly as possible." I fear this dark side of our humanity, this capacity for hate and for willfully inflicting suffering.
*** 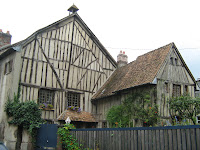 On our way back to La Morinière we passed through Louviers. I have been reading Susan Loomis's memoir On Rue Tatin with great enjoyment, and have successfully made her Stuffed Tomatoes from that book, much to my family's appreciation. Of course we had to see the places she talked about in her book, and pick up something from her neighborhood charcuterie or épicerie. We came home bearing a dozen chipolata sausages for our upcoming celebration of 50 years in La Morinière. 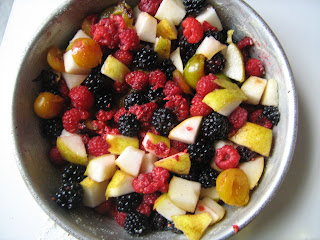 In the afternoon the younger kids wanted to bake something after gathering fresh raspberries, blackberries, and mirabelle plums in the garden, so we had an ad hoc baking workshop and came up with a fruit crumble which we served for dessert after dinner. My husband's uncle and godfather, a parish priest who concelebrated our wedding mass (saying his part in French) eleven years ago, arrived just in time for the treat, so we had yet another evening of good food and great company after a successful outing. 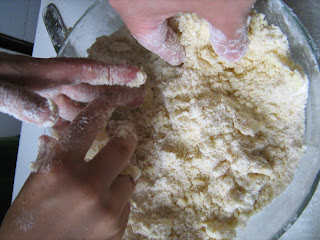 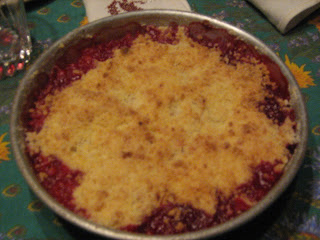 your France posts are big fun!

The fruit crumble looks so good! And I'm enjoying your trip! : )