Notre-Dame and Montmartre: Our Last Outing in Paris 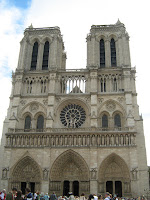 From 2nd reading (Hebrews 12) at Mass last Sunday, August 19, 2007
I had wanted to attend mass at St. Ephrem, the Syriac Catholic church, last Sunday, but to my disappointment it was closed. We decided to walk a few blocks to Notre-Dame to see if we could catch mass there, and fortuitously there happened to be one about to begin in 15 minutes, the international mass. We broke out of the already-crowded queue for tourists and went through the door for mass-goers, found seats in the front section, and breathed a sigh of repose as we quieted ourselves for prayer in the midst of the hustle and bustle of sightseers. The cordoned-off area for mass was like an island of sanctity amid a chaotic stream of circling tourists and endless flash pictures being taken (which never relented all around us throughout Mass).
A soloist in a visiting choir from England sang a haunting prelude that set a tone of reverence for the liturgy. Then the great organ began the processional hymn, "Nous chanterons pour toi, Seigneur," to a tune familiar to English-speaking worshippers as "Praise God from whom all blessings flow." Though at first this cathedral had not inspired in me the same strong emotional reaction that I had had at Chartres, at the sight of the tall gold cross being carried aloft in procession something stirred in my heart. I thought of hundreds of years of hopeful pilgrims and people of faith seeing that sign held high, visible even in a large crowd. The music of the great organ filled the whole space, 115-ft vaulted ceiling and all. I felt as if my spirit were being held aloft with it. 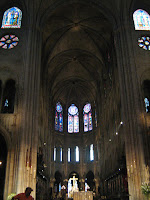 The mass began like any other, with a welcome. The priest gave the welcome in French. Then he repeated the same statement of welcome in beautiful Spanish. I was impressed. Then he did the whole thing in perfect Italian. By then tears were beginning to come to my eyes. By the time he got to English, I was completely drawn in, moved by being part of an international community praying together in the ancient space of Notre-Dame cathedral. One thing I love about Catholic liturgy is you can go anywhere in the world, and the ritual is recognizable, like a home away from home. The spirit of unity fostered by the priest's multilingual welcome was inspiring.
I was moved once again when the Eucharistic Prayer was said in French, Spanish, Italian, English. When I heard my own language my heart quickened, and a feeling of joy and excitement arose inside me, the joy of recognition and of feeling as if I were being spoken to and welcomed. For a moment I was reminded of Pentecost; this must have been the feeling that the 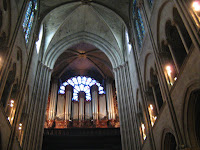 scripture authors were trying to capture, when people rejoiced to hear and understand the gospel in their own tongues. I have heard multilingual prayers at masses before, but I had never been moved as I was that day, and I think it's because I knew that the people around me were from different nations and were, at some moment, having that experience of recognition when they heard their own languages in the Eucharistic Prayer. In short, it was a beautiful mass, with a spirited organ postlude at the end which my daughter enjoyed, blasting through the cathedral from the largest organ in France.
On our way to lunch we took a stroll down the Rue St. André-des-Arts and found a quaint alley, the cour du commerce St.-André, and a lovely toy store, the Terre de la Sienne. We wanted nothing fancy for lunch, so we found a reasonably-priced sidewalk cafe from which to people-watch. There were some interesting people walking by, including a couple of psychotic men arguing over a wine bottle and a guy in angel wings. 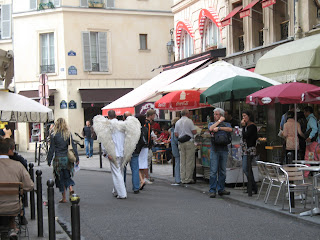 After a passing shower we made our way to Montmartre, where in front of the Sacré-Coeur an extreme cycling course had been set up down the steep steps, with ramps for banked turns and jumps added in. There were TV cameras and an announcer on loudspeaker, and a huge mob. Looking out over Paris we could see individual rain showers over certain neighborhoods here and there, rather than generalized rain over the whole city. We took the funiculaire up to the basilica, walked around a bit, then made our way to the Place du 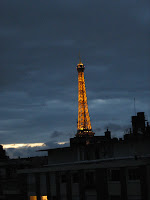 Tertre, which was a mob scene too, so we didn't tarry long there, though it was fascinating to watch the portrait artists at work. My daughter bought a pair of Eiffel Tower earrings for 2 euros. The dollar is in terrible shape against the euro these days.
We spent a quiet evening back in the apartment on Sunday night, which was just as well because the weather had turned quite gloomy, though not gloomy enough to spoil the glittering light display over the surface of the Eiffel Tower, which we saw from our window before going to bed. 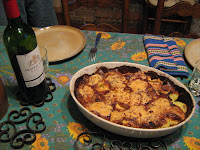 Paris is wondrous, but we were happy to be going back to the country the next day, where the first sound that greeted us when we opened the car door was a rooster crowing. Dinner at home was a hearty country meal: a gratin de pommes de terre and an omelette aux fines herbes, simple but delicious. It was good to be home. 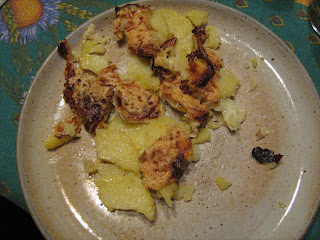 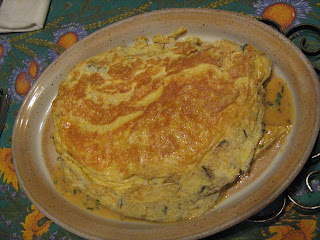