We started our day yesterday at a lovely outdoor mass in Montreuil-sur-Maine, on the banks of the Mayenne river, at a place known as La Grotte, meant to be a replica of the grotto of Massabielle in Lourdes. The gospel reading was the passage containing the Magnificat, probably more beautiful in French than in most languages: 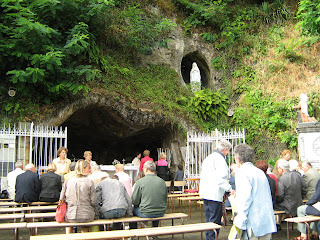 Mon âme exalte le Seigneur, mon esprit exulte en Dieu mon Sauveur. Il s'est penché sur son humble servante; désormais tous les âges me diront bienheureuse. Le Puissant fit pour moi des merveilles; Saint est son nom!
All the towns we drove through appeared abandoned - shut down for the Feast Day of the Assumption of Mary. It was like driving through a U.S. town on Thanksgiving Day or Christmas morning. Restaurants were open, though, and we were able to enjoy a delicious lunch of prosciutto with melon and spinach cannelloni at La Fleur du Maquis just outside Saint-Martin-du-Bois. 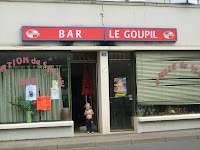 After lunch we drove into Saint-Martin to see if we could get a look at the baptismal font in the church where René Goupil, patron saint of anesthetists, had been baptized on May 15, 1608. To our great surprise, despite the fact that there was not a soul visible on the streets (I did see a little girl poke her head out the door of a café called, fortuitously, Le Goupil), the church door was ajar as if waiting for us to enter (the mairie, on the other hand, was locked). 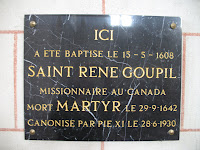 There was no one around. At the back of the church we found a plaque commemorating René's baptism as well the 400-year-old baptismal font beneath it. This had at one time been in a park outside a restaurant in Angers, according to the book A Ghost in the Mohawk Valley by William Breault, S.J., but comparing pictures of it there and our own pictures from the church yesterday confirmed that it had been transported back to its original place in Saint-Martin-du-Bois. 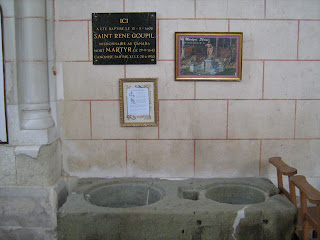 After this satisfying visit we made our way back to the Chateau du Plessis via the village of La Jaille-Yvon, which is up on a hill and has a 12th-century church as well as a breathtaking view of the rolling countryside below. Dinner was another gourmet masterpiece from Valerie, a terrine or little charlotte of fromage de chevre with chives and a salmon purée, with a sweet cherry tomato on top, followed by a succulent quail in a coq au vin type of sauce with the tiniest little onions I have ever seen. Dessert was a dense chocolate fondant with orange sorbet.
The best part of dinner was the after-dinner conversation, which went till midnight. Among the eight of us there were six countries represented (Romania, England, Ireland, Denmark, the U.S., and the Philippines). A couple from Manchester, England, who were Seventh Day Adventists; the Englishman's Anglican parents; a couple from Ireland who were atheist humanists; and my husband and I, fairly moderate Catholics, all got into a spirited and good-humored discussion about faith. From this lively, intellectually stimulating, and enjoyable conversation I relearned about myself that my journey in faith has been largely one of hope rather than arrogant certainty, and that if I believe anything, it's that it's just as erroneous to believe in God because good things happen as it is to disbelieve in God because bad things happen. The question is, how does each person's faith take the path it takes, and why? 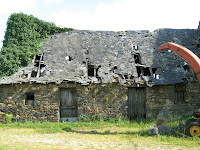 This morning we contacted the cattle farmer who owns Le Grand Oncheray to see if we could visit the place. Le Grand Oncheray was discovered to be René's home relatively recently, in the 1970's. We had made contact with the owner through the mairie in Saint-Martin-du-Bois a couple of times before and explained my interest in visiting René's place of birth. He was a shy and taciturn 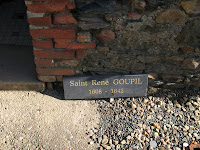 but gracious man who met us at the farm and, over an hour or so of conversation while we were there, warmed gradually, especially after his girlfriend, an equally gracious woman, arrived. He showed us a plaque he had made himself to commemorate the homestead's history as René's family home, now a rather ramshackle but still charming farmhouse. He also pulled out a folder of articles about the place written by various people with an interest in René Goupil. We were thankful for his willingness to welcome strangers from the U.S. on an unusual mission to track down a fairly obscure and rather elusive saint. 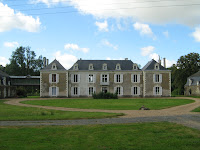 Valerie's husband's property was right next door, and we had been given leave to drive in and see it. This chateau, too, was a gorgeous one, and a tenant on the property had reindeer, a yurt, and a large, very affectionate camel who enchanted our children. After this pleasant stop we drove through Saint-Martin-du-Bois with a mind to pick up a picnic lunch in Segré, just beyond, but before continuing on I asked my husband to stop to see if we could sneak a peek at the ancient baptismal records which, I had read in Breault's book, could be found in the mairie. The mairie doors were locked, still on holiday from yesterday, but through a wide open window we saw two women inside discussing something.
"Excuse me, is the mairie open today?" my husband asked in French.

"No, we're closed, but do you need something?" came the reply.
"Well...we're retracing the footsteps of Saint René, on a pilgrimage of sorts, and we heard his baptismal registry could be found here..."
"Ah, oui! Bien sûr!" said one of the women. "Come, we'll open the door back here for you...You know, you're lucky to find me here today; usually I'm not here on holidays...Now what year was it, his baptism? 1608? Hmm..." She opened a closet door in the office. "Let's see...1800's...1700's...ah, here we are, 1575 to 1630's."
We leafed carefully through the slim, bound volume with its beautifully penned record in old French, came across his older brother Claude's bapistmal record from 1607, our excitement mounting, then finally found his, at the bottom of a page, faded but still legible. The lovely woman made an enlarged photocopy of it for us to take home. When we left the mairie, out of curiosity I crossed the street to the church to see if it was open. This time it was locked. 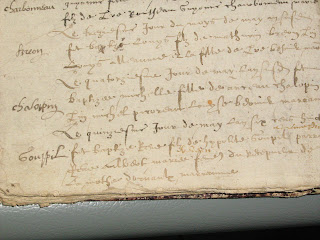 We got our picnic lunch and spent the early part of the afternoon at a place called Le Domaine de la Petite Couère, a large estate where various animals such as alpacas, watusi, black swans, emus, mountain goats, pigs, cattle, and water fowl are kept. There is also a period "village" containing a blacksmith's shop, saboterie, school room, general store with artifacts from the 19th and early 20th centuries, replicas of cottages and depictions of village life, and collections of old tools, vehicles, costumes, toys, and the like. Here and there there were witty literary quotes tacked up to the walls, which were entertaining. The place reminded me of the Shelburne Museum in Vermont or the Adirondack Museum, but smaller in scale, and very interesting.
After this we headed home, a three-hour drive. I have been very impressed with the French highway and road system. We have managed to find every town without a map, simply because directions are so well-marked on the road. Essentially all we had to do was find our way from one church steeple to another. There have been a couple of more humorous reminders that we are in France: the roadside coffee shops serve quiche and crêpes, and even the toll collectors look like fashion models. Vive la France!
We're now back at La Morinière after a fruitful pilgrimage in the steps of Saint René. Making the journey, even in reverse - from his place of death to his place of birth, over the last couple of months - has given us an idea of the scale of this journey, especially when one considers what was available to travelers (or not) in the 1630's. He had to leave Anjou, a region which reminds me so much of the Champlain Valley in Vermont and the Mohawk Valley in New York, where he died. I had to wonder the other night, while driving down, if it had been similar back then, too, in the 1600's, and if being in New France had made him homesick for the landscape of his birthplace. He traveled overland probably to Paris and then to Dieppe, then boarded a ship bound for the New World, then somehow managed within a couple of years to get from Quebec to what is now Auriesville, NY, only to die there after weeks of torture. His brief life was a pilgrimage in and of itself, with a long, lonely trek in its final years. I can't explain why his life means such a great deal to me, but I'm glad to have traced its outline, knowing of course that we'll probably never be able to describe fully its depth and its meaning. 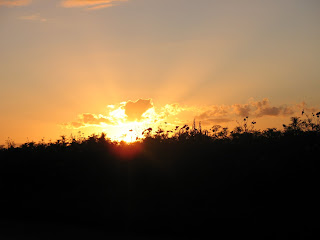