Books That Made a Difference

A month ago, Madeleine L'Engle, one of my favorite authors, died. It's been hard to contemplate the passing of someone who was such a significant presence and influence in my childhood, through her marvelous books. There have been many blog posts about Madeleine L'Engle. Many of the recent ones are outpourings of how important her work was to the blogger's life and character formation. My own thoughts would only echo what they have stated about the power of the written word to transform one's world, one's very identity.
So I'm going to do my daughter's friend's homework here instead. She was asked to come up with a "Signficant Reading Timeline." I notice as I create it that there's a lot of L'Engle on there, and a lot of what's considered "children's literature." If anyone out there feels like sharing a significant reading / educational experience / movie / influential event timeline or a "books that made a difference" list (blogged about mine last July), please do!
Early childhood:
Where the Wild Things Are by Maurice Sendak;
Where the Sidewalk Ends by Shel Silverstein;
various fairy tale anthologies;
a children's bible;
a comic book of the life of St. Bernadette; and
some works by E. Nesbit and Enid Blyton
Age 8:
Harriet the Spy by Louise Fitzhugh;
Little Witch by Elizabeth Bennett;
various works by Ruth Chew, Betty MacDonald, Beverly Cleary
Age 9: Tuck Everlasting by Natalie Babbitt.
This was HUGE. I realized that you could make language beautiful on purpose as well as tell a meaningful story with it, thanks to Dolores Roberson, the librarian and teacher who guided us through this book in school.
Preteen years:
Mrs. Frisby and the Rats of NIMH by Robert C. O'Brien
Meet the Austins, A Wrinkle in Time, and A Wind in the Door by L'Engle;
Jennifer, Hecate, Macbeth, William McKinley, and Me, Elizabeth by E.L. Konigsburg;
The Ordinary Princess by M.M. Kaye;
A Gathering of Days by Joan M. Blos;
The Lion, the Witch, and the Wardrobe by C.S. Lewis;
Little Flower by Mary Fabean Windeatt (a bio for children of St. Therese of Lisieux)
The Velvet Room and The Egypt Game by Zilpha Keatley Snyder
Homecoming and Dicey's Song by Cynthia Voigt
various works by L.M. Boston, Helen Pearce Jacobs, Lois Lowry, John Bellairs, Katherine Paterson 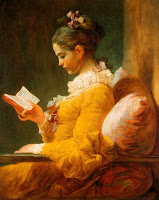 Age 13:
A Ring of Endless Light by L'Engle;
To Kill a Mockingbird by Harper Lee
Age 15:
Many Waters by L'Engle;
Lives of a Cell by Lewis Thomas;
Two from Galilee by Marjorie Holmes;
Ethan Frome by Edith Wharton;
The Agony and the Ecstasy by Irving Stone
Age 16: Le Petit Prince by Antoine de St.-Exupéry
Age 17: Two Part Invention by L'Engle

20's:
Catherine, Called Birdy by Karen Cushman;
Wild Swans by Jung Chang;
By the River Piedra I Sat and I Wept by Paulo Coelho;
The Christmas Miracle of Jonathan Toomey by Susan Wojciekowski;
Holes by Louis Sachar

30's:
The Fourth Wise Man by Diane Summers;
"The Expert on God" by John L'Heureux;
Lying Awake by Mark Salzman;
Bird by Bird by Anne Lamott;
The Sparrow by Mary Doria Russell
The Swallows of Kabul by Yasmina Khadra
Vipers' Tangle by Francois Mauriac;
Wicked by Gregory Maguire;
The Painted Veil by W. Somerset Maugham

Brigid got permanent markers and drew on pictures and paper and herself.

Brigid tried to wash off the marker and it didn’t work so she colored herself back to normal. Mom called the doctor and Brigid took a bath and turned invisible. In the end Brigid was ok but dad was not.”

It pleased me to no end to find him curled up in bed reading the anthology Poetry Speaks to Children and to learn that one of his favorite poems in the book was "hist whist" by e.e. cummings. I'm thrilled that he devoured Born with a Bang, From Lava to Life, and Mammals Who Morph by Jennifer Morgan in the space of a weekend. I delight, too, in my daughter's discoveries - Sharon Creech, William Sleator, Louis Sachar. Everyone should have a significant reading timeline. I am enjoying watching my children's unfold.
Posted by T. at 7:24 PM

You mentioned Sharon Creech--have you read "Love that Dog"? It's one of my favourites. I only read it for the first time two years ago, but it really should go into the Age 10 group. Also in my age 10-12 list: A Little Princess, The Secret Garden, and Where the Red Fern Grows.

I'll have to check that one out!

Now that you mention A Little Princess, I regret not remembering to include that on my pre-teen list; I distinctly recall how Sara Crewe's tested will made an enormous impression on me, especially when she made a point of remarking that we're only as good as adversity shows us to be, or something to that effect.

Great list, T! I bet it's so neat to see your children "unfold." I can't wait for my own child to get wrapped up in books like I do (although this may be some time as right now he can't sit still for a story).

I have to second Where the Red Fern Grows. I absolutely loved this book when I was a child.

Oh, so many choices! Like you, I was changed by many L'Engle books (there's a whole generation of former vacation Bible school and Sunday school kids out there who know about un-naming from my days with L'Engle).

For me, no list would be complete without The Star-Bellied Sneetches (Seuss has a lot to say to grown-ups too), Island of the Blue Dolphins, Black Boy, or Heart of Darkness.

Then there's Harry Potter -- countless teachers will say it takes real magic to turn kids who hate reading into kids that wait in line for a 700-something page summer read! Similar but darker and perhaps more sophisticated is the Phillip Pullman "His Dark Materials" series (The Golden Compass, The Subtle Knife, and The Amber Spyglass).

I think I'm going to look for my copy of A Wrinkle in Time...