I had SOOOOOO much fun at my oboe lesson today! Kyoko can turn every little gaff or setback into a huge laughing moment. We spent the 2nd half of the lesson doing a kind of sight-reading marathon, with her accompanying me on piano. I felt like someone who's not quite reading at grade level, but she actually seemed pleased with how I did, and also with how, despite the LOOOONG summer hiatus and my recent stressful schedule, I had managed to keep up some of what I had gained with the instrument. What a relief! I thought it was going to be a bad lesson.

She's gently trying to get me to consider a recital and put Gordon Jacob's lovely "Ten Little Etudes" under my nose, carrot-to-Bugs-Bunny style, to tempt me. 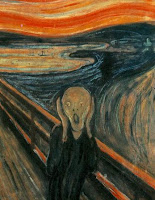 When I started taking lessons I had told her up front that I would never, ever, ever, ever do an oboe recital. Now I'm enjoying the instrument so much that I'm not so sure I hate the recital idea the way I did before...except that being gazed at publicly is still such a horrifying thing for me to imagine. Play in a group? That I would do. In fact, I'd LOVE to be in an ensemble, if I could be just one of many voices, contributing my part but not alone in the limelight. She mentioned there might actually be just the group for me in a neighboring town; her friend conducts an ensemble of adult beginner musicians. But a recital? No way. The very word recital gives me the creeps. I suffer from physically incapacitating, stomach-gnawing, horribly terrifying, emotionally crippling stage fright. (There's a great article here at Mandolin Magazine that sums up the experience and possible ways to deal with it.) If it was bad during my dancing years, when I was at least performing in something I was good at, how can I possibly bring myself to do publicly something I'm barely tolerable at? I'd almost rather be coding someone in the O.R. ...

Meanwhile, my son's loving violin. He was practicing in the living room while I was in the kitchen and I overheard him talking to himself, saying "That was fun!" after a couple of the things he was practicing. I think I had about as happy a feeling for him as I could possibly have. I love the fact that we can now enjoy my violin mix together. We're suckers for Neville Mariner's cut of Vivaldi's Winter, and Gil Shaham playing Sarasate.

Kyoko's in concert next week with the Philharmonic at Sanders Theater, my old stomping grounds, where I struggled to stay awake through many an undergraduate lecture. They're playing a new work for violin and tabla as well as some Ginasteras and Mussorgsky. I think I'll bring the kids to hear Pictures.
Posted by T. at 9:48 PM

Some people's names just seem absolutely perfect for what they do. Neville Mariner! A totally perfect name for a musician and conductor. (Launcelot Andrews: with a name like that, he had to be a preacher, right?)

I once heard of a physician named Dr. Flesh and a dentist named Dr. Cutler - not quite as much fun as the Nigels, Clives, and Nevilles of this world! :)

A wind ensemble would be heavenly - especially if we were all willing to laugh at ourselves a bit, as I often need to.

Alright... years back, stagefright ccrippled my career, but at this point it ismy friend. meaning, if I wander on stage without at least a frisson of nerves I'm bored and ovely blase about being there.

Grumble, I hate (my) typos.

Perhaps you could try a trial run...a private recital in your own home with a handful of family and friends, your teacher, some wine and chocolate...and a duet with your son on violin?

Admission: I haven't a clue about that work. Do tell! Do you know who publishes it? Do you own a copy?

I did a search on the name and only landed at your site!

I prefer playing in groups. I like being surrounded ... makes me comfortable. Recitals? Well, I do chamber music recitals. Those are fun.

I'm enjoying the super eclectic nature of your blog.

Chris, I'm so glad - thanks so much for visiting!

I also saw on http://www.gordonjacob.org/w_ten_oboe.html that it can be ordered from Emerson or from Boosey & Hawkes.

It's also at http://www.musicroom.com/se/ID_No/064496/details.html (British) and a bunch of sites in Europe, if you use as search terms "gordon jacob" + "ten little studies."