We've been sharing a lot of ghost stories in the O.R. these past few days. I don't know what it is about ghost stories, but people love them, me included. Someone was telling us about how she took a picture at a birthday party, and when the photo was developed, the woman in the portrait in the background had somehow been completely transformed. Another person described inexplicable happenings with one particular lamp in her home, which, every year, around the time of her grandson's death, has a way of turning on when she leaves the room. When she comes back, she finds it on, though it's not on a timer, and there's no one else in the house. It only happens in the winter, during the months he had been most ill with the leukemia that killed him. Who can say what's going on in any of our ghost stories?

I admit I have one too. I've written before that the possibility of spirits and visitations is well-accepted in my culture and family, and that people we know have actually had some experiences with spirits. I've always been wary of this "gift" some members of my family have - the ability to "see" dead people, or medical conditions, or what-have-you. Frankly I've always hoped it's a talent that totally skipped over me, or at least has been so diluted it's only perceptible as a kind of eerie intuition for certain things. 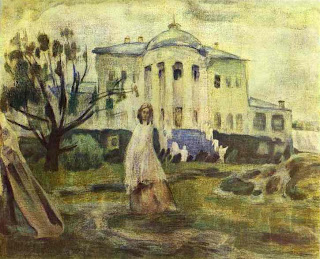 Many years ago my mother and I were staying with my godmother during one of our visits to the Philippines. The bedroom we were in was right above her driveway. One night we were spending a quiet evening in there - probably reading or doing crosswords, which would have been very typical for us - when I heard someone crying outside. It sounded like a woman, a very upset, inconsolable, sobbing woman. Sometimes the crying sounded a bit faraway, but mostly it was right under our window. I looked up from whatever I was doing and asked my mom, "Do you hear that?"

"You'd better look. Someone might be in trouble & need help or something."

It somehow didn't sound like your average distress call on the street. I can't explain why. "Me? But you're the brave one! I don't want to look..."

My mom glanced toward the window. "I don't really want to look either," she said.

The sobbing continued. It was the saddest sobbing I'd ever heard.

"What if she's getting attacked or something?" my mom said.

My mother got out of bed and parted the window blinds.

"No," she said. "I don't see anyone." By this point I think the crying had stopped.

We later told my godmnother and her daughter exactly what happened, and though my godmother dismissed it as probably some wailing cats out in the yard, her daughter had a very different reaction. I couldn't believe it, but I saw the hair on her arms stand erect as we described the pitiful, despairing sobs. I thought that was just a cliché out of a mass market novel.

"What's the matter?" I asked her suspiciously.

"Um...you heard it right under your bedroom window?"

"A young woman who worked for us was shot to death not long ago right in that spot."

We see some pretty disturbing things in the O.R. Amputated limbs. "Running the bowel," when the surgeon takes all the intestines out of the body cavity and runs his fingers along their length to be sure nothing's out of the ordinary. Stinky abscesses. But perhaps one of the most fascinating entities from the operating table, which I can't resist mentioning on this eve of All Hallows' Eve, is the "monstrous tumor": the teratoma. 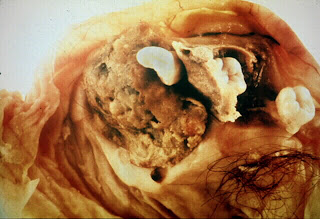 This is a ball of many different kinds of tissues found as one big tumor. The mish-mash can include tissue that is recognizable as thyroid or lung or eye or any of a number of different parts of the body. Teratomas are a result of stem cells which get sequestered somewhere and develop higglety-pigglety into the various types of tissue that they have the potential to become. Some of the tumors contain individual teeth and hair, fully-formed - different expressions of essentially the same genes. It's a little unnerving.

Over the weekend I watched the compelling NOVA special "Ghost in Your Genes," which describes the exploding new field of epigenetics, the study of the cellular and molecular mechanisms that govern gene expression. These mechanisms are the machinery behind turning genes "on" and "off." Less than 2% of our genes are different from those of a chimp; the rest are identical. We simply express them differently - turn different ones "on" or "off." Cancer is a disturbance of this on/off balance, as are many (or, maybe someday we'll say, most) diseases. Teratoma parts are also examples of gene expression gone haywire.

I was in the middle of medical school at the turn of the millennium, and at that time we were taught that a person's traits resulted from an interaction between nature (genetic endowments) and nurture (environmental influences) in a dynamic, ever-evolving process. The study of epigenetics gives us tangible hooks on which to hang those ideas: DNA methylation and chromatin modification may very well be the molecular ways in which experiences cast their imprint upon cellular structure and function.

An example: mouse pups who were cared for by mothers who licked them attentively showed far healthier stress reponses, and far fewer methyl groups on their DNA, than mouse pups in the care of less attentive mothers. Mouse "personality" - or responses to life and environment - was not just a matter of innate temperament; it was also modifiable by experience.

What fascinated me about "Ghost in Your Genes" is that it took the nature v. nurture debate, turned it on its head, and added a new twist. The twist was this: some research demonstrated that the impact of behavior and lifestyle wasn't limited to the individual living the current life. The experiences of one generation can have reverberations in the biology of its descendants. Famine in your grandparents' village might mean your molecular regulators of gene expression are affected in such a way as to increase your risk of developing diabetes. Epigenetics is exciting because of its power to bring together the strengths of molecular biology and psychosocial theory and to shed light on connections between human experiences - nurture , abuse, smoking, famine - and human disease states and disorders - diabetes, cancer, autism, anxiety disorders. It's slowly becoming clear that we may not be able to claim we're only harming ourselves; our children's children stand to experience repercussions because of what happens to us now. Our world, our experience, interacts with us on the molecular level in ways that are only now being elucidated.

Watching the program, I found myself nostalgic for my genetics rotation at the N.I.H., my road less traveled, and I wondered, almost wistfully, what might have been if I had stayed there. Here was a core idea in my intellectual belief system - the idea that genetics and environmental factors act in concert to produce an individual's characteristcs - now with some concrete science behind it. Molecular biology, child welfare and development, social theory, so many of my interests, all crossing paths and opening up a new world of scientific discovery! I can't wait to see what future research brings...clearly the human genome project was just a scratch on the surface of machinery that was more intricate than we ever imagined. We don't just get genes from our ancestors...we get their experiences too, in our very cells, passed down through the molecules and histones that cling to the very blueprints from which we are made, marking us like spectral artifacts on developed photographs. We have a lot to learn from our ghosts, I think, especially if we're willing to expand our thinking. 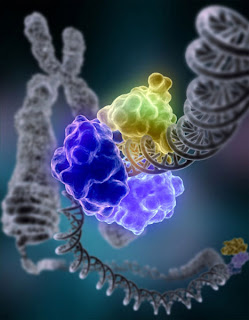 I read some interesting papers awhile back on the generational effects on the "nurture" side as well. There's research that shows elements of PTSD, anxiety, etc. in the children and grandchildren of Holocaust survivors. It's easy to assume that it's the result of patterns of child-rearing, but perhaps it's also biological.

Do I remember correctly that trauma (particularly early trauma) changes the topography of brain tissue, amping up our more basic survival areas in a permanent way?

That's really interesting stuff about the epigenetics. I about lost my breakfast staring at the teratoma though ;) What exactly am I looking at there? I love a good ghost story, too!

I've always been wary of taking an either/or stance with issues like this, and for me it has always made sense to think, "It's not just A or B, it's both!" I think it makes so much sense to suppose that experience sculpts brain architecture and transforms neurochemistry, gene expression, etc. I believe you're right about early trauma being significant in that way, though I'm not sure about the permanence of psychobiological changes. I have to have hope that interventions like therapy help, and of course, speaking of not just A or B but both, the combination of therapy and pharmacology seems to help best. Therapy is a form of learning, and learning creates brain changes as well, throughout life, though perhaps more easily in earlier life (not sure).

I know there are folks out there who find my emphasis on brain function deterministic, but that may be because they see mind/spirit as some special entity set apart from body, whereas I believe that mind IS body. Epigenetics now also seems to blur other boundaries - experience IS nature...for generations to come, it seems!

It would be fascinating to look at any trauma in our parents' lives and see if our generation's anxieties might be due to epigenetic changes passed down...Wouldn't that be even more motivation to try to make our world as happy and comfortable for everybody as we can?

Hi, valleygirl - we must have been posting at the same moment!

That's a tumor that had some teeth and hair and a whole bunch of different body tissues in it when the surgeon opened it up. You'll see more of those pathology slides/pics/specimens when you get to med school!

What's hysterical is a scene in the movie, "My Big Fat Greek Wedding", during the family dinner. Tula's not-so-bright aunt is telling a story to Ian's uptight parents about a lump on her neck. After struggling with the word Biopsy (Came out, finally, as Bibopsy)she said it had hair and teeth....it was her identical twin. I nearly fell over. Too funny!