I played in a music group tonight! As an oboist! I can't believe it.

I've dreamed for so long of making music in a group, of playing "real" pieces on the oboe with other musicians. I usually have a hard time going out on a limb, but this was totally worth it. My teacher has a flutist friend who conducts a chamber orchestra for beginner musicians, and she told me to go and rehearse with them, so I gulped down my intimidation and went. It was scary, but fun! 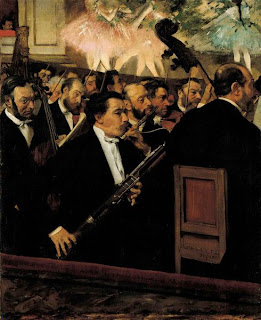 At first I had a total deer-in-headlights moment. The conductor put some Corelli in front of me, and I became completely illiterate. It's as if the 6 or 8 oboe lessons I've had, not to mention several years of piano and choral singing, had never transpired. I would have had an easier time reading a billboard in Cyrillic. But once I accepted the fact that I was going to have to just sight-read as best I could and play whatever I could, it got better.

After a break he plunked Fauré's Pavane in front of me and said, "Our first oboist isn't here, so you'll have to do the oboe part."

He just dismissed my protests and started conducting, and when the oboe part came around, he waved me in, so I played, and though it had some awkward moments - seeing as I had never seen the piece before, though of course it's a familiar one from radio and recordings - it actually came out better than I expected. As for the mistakes here and there...well, the ceiling didn't fall on me or anything, and the conductor was patient and good-humored, so I really just needed to relax about the whole thing...

Playing the final duet in the piece, with the flutist, was beyond enjoyable. There's something so satisfying about playing in harmony with someone else, and about being one musical voice among many different voices, each with its own special qualities, answering or complementing the others, in a group where faults are tolerated and forgiven rather than judged or cause for exasperation.

Why is it so challenging sometimes to translate this kind of spirit and focused energy into the rest of life?
Posted by T. at 10:06 PM

Congrats on your first group performance! It sounds like it went very well. Woohoo!

Nope ... the ceiling has never fallen on me either! Funny how that works. :-)

Congratulations! I hope you have many more fun evenings like this one.

The good thing is that the trill is there all the time when you are sight-reading in a group--especially when the music is good.

(I probably shouldn't tell you that, when a musician has had a bad performance, he or she sometimes says, "Thank God I'm not a brain surgeon." No. I shouldn't write that here, should I?)

Patty, you are too funny...

OMG I just read this. Congratulations! The Pavane is so beautiful!! YAY!!

May this be just the beginning :-)