Optics, Acoustics, and Matters of the Heart, Not Necessarily in that Order 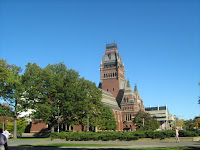 My son's questions have a way of keeping us on our toes. The other night at the dinner table my husband and I were reminiscing about college and he made a facetious, ironic remark about "the many men" I surely dated back then - a risible idea considering my awkwardness and in light of the fact that one of my husband's pet names for me is "super-duper-dork," upgraded from a mere "super-dork" only recently. My young son, though, doesn't have a fully developed sense of irony just yet, and in fact will be the first to admit, "I'm just very literal; I can't help it." His rejoinder to his father's joking comment, addressed to me, was, "So why'd you pick Papa?"

We all laughed, but it was also a good question. Why DID I want to build a life with this particular guy, and what wisdom should I pass on to these little ones about such a choice? They know the suggestions I've mentioned in the past - look for a good heart, a believer in equal human rights, a respectful person who's also hard-working, intelligent, full of integrity, funny, someone you wouldn't mind seeing every day, who can be your closest friend but also can make your heart beat a little faster once in a while, who can teach you and learn from you, who helps the elderly cross the street and the very young enjoy games and songs, who will let things that matter to you matter to him or her even if they're not inherently interesting to him or her. I wanted a shared life with this kind of person and knew my husband was the one who could bring all these gifts into that life.

We recently visited a friend whose wife had suffered a pretty bad fracture. We started talking about marriage, about the great guys we were married to, and she summed it up for me: you have to be able to picture your spouse willing to empty your commode and pull up your underpants for you when you can't do so for yourself, and know that that person will still look at you with love. I thought immediately of when I broke my arm a few months before starting my anesthesia training, of the compassion I saw in my husband's face, his gentleness as he helped me in the shower, his patience and kindness through it all. Your husband should definitely be someone you don't need to pretty yourself up for, because life can throw in some un-pretty moments! 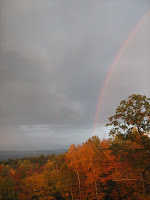 My son's other questions this weekend were about rainbows. There was a rainbow over our cabin after a passing shower at sunset yesterday evening, and we started talking about the signficance of rainbows. I explained how in ancient times some people thought of rainbows as signs of hope - of the fact that even the worst storms pass - and how that idea had come down to us biblically in the story of Noah's Ark and God's promise not to destroy the world. My son also wanted to know about the science behind rainbows, so I had to try to resurrect my high school physics and talk about how sunlight from behind an observer got refracted into its component wavelengths as it passed through raindrops in front of the observer. I said we could also do that by passing light through a prism.

"Do we have any prisms?"

"Can't we do the same thing shining a light through a jar of water?"

I knew the answer was no, or at least not exactly, but I had to think about why not. "Mmm...I don't think the jar of water would bend the light waves enough times to get all the colors..." My memory of high school optics was fading fast. Angles of incidence, anybody? But he asked me an even harder question then.

"If we make the rainbow by using a prism, does that cancel out God's promise about taking care of the world?"

I looked at him stupidly for several seconds. "Not at all, sweetie," I said. "It doesn't matter how the rainbow happens..." I searched for more thoughts on the subject. A groping search. "Rainbows have been happening in nature as long as sunlight's been shining through water droplets. People in ancient times, some people at least, thought of them as a kind of greeting card from God, a sign, but everything around us can be thought of as a sign if we see glory in it..." At this point I wanted to shut up because I was beginning to sound like a watch-therefore-watchmaker proponent, and I wasn't entirely happy with that analogy. "I think the fact that we can make rainbows, or appreciate rainbows, is as much of a gift as the rainbow itself." Where's my parent-of-a-little-sage handbook?! I must have missed it when they were handing those out...! 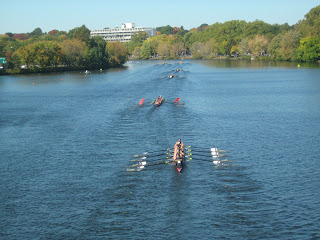 Today we caught part of the Head of the Charles regatta under the glorious weather of a perfect October day, then headed to Sanders Theater to hear Kyoko play with the Boston Philharmonic. They had a terrific program lined up: Variaciones concertantes by Ginastera, a concerto for violin and tabla by Korde, and Musorgsky's Pictures at an Exhibition, all magnificently played by this superb orchestra under the baton of Benjamin Zander. I got so moved and excited when she sounded the first A to tune everybody. She was simply amazing in the oboe solos from the Ginastera variations, and as principal oboist for Pictures. The trumpet solo that opens Pictures was perfect too. The violin and tabla virtuosi took our breath away. The whole concert was a treat like I haven't had in a long time, in an acoustically impressive concert hall. I never appreciated as a sleepy undergrad how astonishing the acoustics are in Sanders. 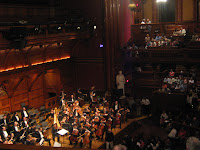 We were sitting in the balcony just at eye-level to the Latin inscription above the stage which reads: QUI AUTEM DOCTI FUERINT FULGEBUNT QUASI SPLENDOR FIRMAMENTI ET QUI AD IUSTITIAM ERUDIUNT MULTOS QUASI STELLAE IN PERPETUAS AETERNITATES. "They who have been learned shall shine like the splendor of the firmament, and they who educate many to justice shall shine as stars for perpetual eternities.” As the final chords from The Bogatyr Gates soared over and around us, filling the hall with their majestic sound, I felt totally swept away, filled to the brim with music, and in awe of the musicians below who, as the inscription described, shone like the splendor of the firmament.
Posted by T. at 8:39 PM

Lots to think about in this one...love, rainbows, and musical inspiration.

Thanks for the translation of the inscription in Sanders. I've wondered for years what my single year of high school Latin couldn't reveal.

What a perfect summary for today's thoughts...

I wish I could take credit for the translation, but alas, credit goes to the august institution itself, which provides on one of its websites translations of most or all the Latin strewn about campus...actually quite interesting to read, especially recalling that I walked by all those Latin quotes with my thoughts elsewhere, for the most part!