"Hot" Topics of the Day 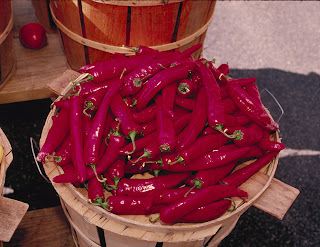 I love it when brilliant, creative scientists take the latest medical break-throughs straight from nature's gift closet. Aspirin from willow bark. Hirudin from leech saliva. Protamine from salmon sperm. And now capsaicin from red hot chili peppers, which may be useful as a gate-opening molecule to let QX-314, a derivative of the local anesthetic lidocaine, do its job as a pain blocker. Looks like we anesthesia folks are going to have to learn some new tricks yet again! Thanks go to my mother-in-law, who alerted me to the article in today's Globe about the research on this substance, already known to riot police (it's the active ingredient in pepper spray), arthritis sufferers (who might use capsaicin-containing creams), and purveyors of hot sauce.

***
On the season premier of Desperate Housewives Teri Hatcher's character asks someone during a medical consultation to check "those diplomas because I want to make sure that they're not from some med school in the Philippines."
The producers had this to say to the Philippine government's outcry against the insult: "The producers of 'Desperate Housewives' and ABC Studios offer our sincere apologies for any offense caused by the brief reference in the season premiere...There was no intent to disparage the integrity of any aspect of the medical community in the Philippines."
What possible intent could there have been, then?
Considering that some of the best doctors in the world come from OUTSIDE the U.S., that some of the best nurses in the U.S. are from the Philippines, and some of the worst health care in the world can be found in the U.S. system, I have to agree with those who have characterized the line as an ignorant and offensive slur. 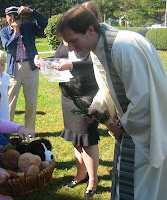 Many parishes hold a "blessing of the animals" event in honor of Saint Francis of Assisi. This year it's a little delayed at our parish, probably due to the holiday weekend, but we'll be there! For our kids, who don't have pets, it's always a blessing of the stuffed animals. I'll never forget young Fr. John at our church laying a hand on my son's teddy bear and saying, "God bless SuperBlueBear." The Jesuits are great.
But back to the Franciscans - I want to say hi with a big hug to my favorite Franciscans / Franciscan affiliates: James Stewart, one of the most talented spiritual teachers I've had the privilege to hear and learn from, and Fr. Matthew Pravetz, O.F.M., who taught me the anatomy of the human body without letting me forget about the human spirit.
Finally, although St. Francis probably did NOT write the "Prayer of St. Francis," I'd like to jot it down here because it's my favorite prayer ever. With its meditative rhythm, expressive humility, and beautiful ideas, it says it all. The oldest known version was found in the December 1912 issue of a French magazine La Clochette; that version (which contains a few lines the popular English-language one tends to omit) is reproduced here too. 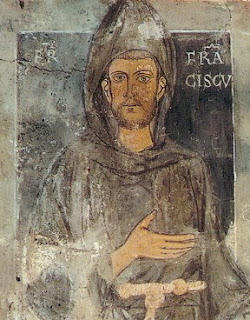 I read that article on capsaicin as well, and I was impressed and excited by this discovery (and I'm a non-medical "person"). I'm curious to see what the world of anesthesia will do with this breakthrough down the road.

Being Asian, I can understand the sting from the 'Desperate Housewives' barb. Not cool, ABC. Not cool!:/

One of the reasons I enjoy reading your blog is because it brings back warm memories of my Catholic upbringing and my faith. I am a "lazy" Catholic right now (not great about attending mass), but I find your posts uplifting. Thanks! (Sorry for the long comment, too!)

Hi, Valleygirl! Always nice to find fellow-Catholic-Asian-medical mommies out there! :)

I am not a great Catholic or Christian, but I try to align my life with the things Jesus taught about respecting every human person, and I do cherish the aspects of our faith that are beautiful and that enrich my life -story and ritual.

I love long comments - thanks for stopping in! :)

So, what makes a "great Catholic or Christian"? Going to Mass every week? Following church teaching without questioning? (I know at least one priest who thinks so...)

I would suggest that the questioning and struggling that you do in this blog -- and undoubtedly in daily life -- are a big part of being a great Catholic and great Christian. The public side of your religious life as played out here certainly helps lead others to a more thoughtful life.

If you can get past all of the arbitrariness that's flying around the church these days and get back to the basics, Jesus (and the saints that follow) were all a bit rebellious. Working hard to align our lives with the principles you mention and leaving ourselves open to the radical places that such reflections lead us are, I believe, part of the journey.

Speducator lvc, thanks for the encouragement and the supportive comments.

You've given me an ideal to aspire to: that of leading "a thoughtful life." Glad to have you along at least part of the way!

I agree with you that physicians from outside the US are some of the best, and the Philippine nurses I work with are also outstanding. I think the Desperate Housewives writers meant to make a joke about AMERICANS who have to seek med school admission overseas, and they picked the Philippines because it sounded farther away than Guadalajara or Granada (or maybe they just don't know anything about the offshore med schools Americans go to.) I didn't take it as an ethnic slur, because the doctor she was talking to was Caucasian, after all . . .

That was my take on it---they were trying to be funny, not insulting---but I went to Harvard Medical School and find it absolutely hilarious when a TV show uses that as some kind of badge that a doctor must be very good! :-) (As you well know, where you go to med school reflects how good a college student you were, but where you did your residency means more about what kind of doctor you are.) There are good docs and bad docs from every medical school, but I have colleagues from the Philippines, India, Ireland, Pakistan, Belgium, Sweden, Israel, Sri Lanka, England, France, Greece, Iraq and probably a couple of other places I'm forgetting and I would let any one of them anesthetize my children. (You know that's the highest praise any of us can offer each other!)

I hope you can agree with me that they were ignorant but did not intend a slur, just for your own peace.

Wow. Our MGH colleagues have announced their "discovery" that capsaicin depletes Substance P and that this will be a revolution in medicine. Amazing! I wonder when they will announce that they also invented the internet???

I totally see your points. But even if they had picked Guadalajara instead, it would still have been insulting in its implication that a medical school that is not American, Canadian, or European (read, WHITE) must be inferior. That IS racist whether people want to admit it or not. Might as well have had James Watson writing the script...

It's also insulting to Americans who go to non-U.S. schools because it encourages and perpetuates the misconception that those Americans are somehow less capable than those who enter U.S. schools. Having been through that admissions process and seen some of the people that make it through, for both med school and residency, I can say with confidence that any assumption that people who go to school elsewhere aren't "as good" as those who get admitted here is a grossly mistaken one.

But don't worry about my sense of peace...Racism, sexism, and all kinds of -isms, intentional or thoughtless, aren't showing any signs of going away soon, after all. I sleep well enought at night, in the knowledge that for the most part I try very hard not to add to those evils, and in the hope that sometimes I might be able to add to some good in the world. I'm counting on everyone to keep me in line, though! Keep me true to my intentions, folks, ok?

Thanks again for coming by.